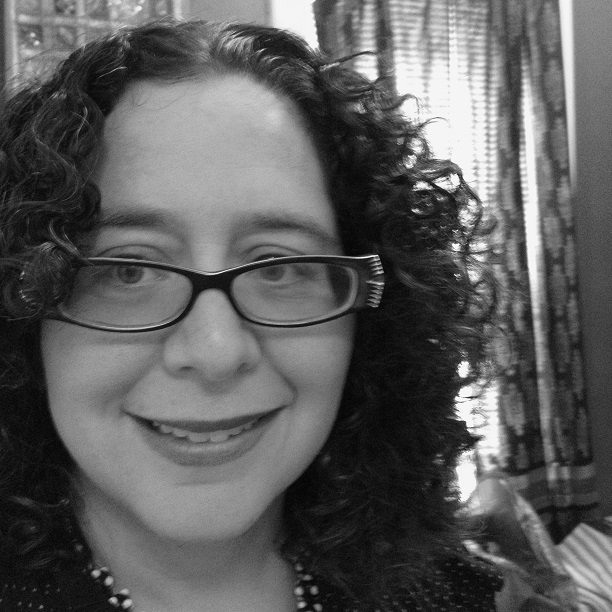 Joanna Fuhrman is the author of four books of poetry, most recently Pageant (Alice James Books, 2009) and Moraine (Hanging Loose Press, 2006), as well as the chapbook The Emotive Function (Least Weasel Press, 2011). Her poems have appeared in many journals, including The Believer, Volt, New American Writing, Conduit and Quarterly West, and been featured in anthologies published by NYU, Carnegie Mellon, HarperCollins and Soft Skull. In 2011, her poem “Stagflation” won a Pushcart Prize. She is a poetry editor for Ping Pong and has been associated with the Poetry Project at Saint Mark’s Church for many years, serving as a reading coordinator and workshop leader. With Nicole Peyrafitte, she is the co-curator of RSVP, an interview salon that rotates between people’s homes. She teaches poetry writing at Rutgers University, SLC Writer’s Village and in her apartment in Ditmas Park. Her essays on teaching appear regularly in Teachers & Writers Magazine. For the last few years, she has been working on a collaboration with the artist Toni Simon. Sections of it can be seen in print in the 100th issue of Hanging Loose and online in Talisman, Posit and Paperbag.

And Yes, I Would Like a Another Ghost-Shaped Truffle!

The pink plastic skulls at the proofreader’s
Halloween party are lit with flickering candles,
and I think I would be happy to do nothing
but stare at them, transported into a liminal
state of wavering light, but then there’s that voice,
that high-pitched shriek of that woman across
the table, her face thick with orange-tinted beige,
her hair helmeted with mousse, that voice:
a Long Island screeching highway, even though
she says she’s lived in New Rochelle for many years.
As I down red wine, the windows wavering,
she keeps blabbing about her work as a shaman-
in-training, her glorious apprenticeship
in past life regression. Everyone is talking
about their journeys, their trips in zero-gravity
immersion tanks, their swallowing of microscopic
biological crystals, their lifelong study into
the subtleties of aromatherapy. Just so you know,
if you take a certain cocktail of psychotropic drugs
in a locked gymnasium in the suburban woods,
the men who catch your projectile vomit in buckets
are called angels. As I listen to the overlapping stories,
a woman keeps double-dipping her carrot in the packaged
hummus. The man who wanted to be an artist is talking
about his life as a sports photographer, what lenses
are needed to capture sweat. Everyone is trying so hard
to be happy—I am eating too much spider web-motif
chocolate cake and ersatz Reese’s peanut butter balls
wrapped to look like bloody eyes. Everyone else is stuffing
their mouths with potato chips, talking about how they don’t
want to overindulge as they overindulge, patting their flat
or bulging bellies as they expand in the black spandexed night.
A woman across the room dressed like a sexed-up pirate
is talking about genital piercing, the stuffed parrot on her
shoulder shaking at her every word, and I am feeling a little
repulsed at the thought of her clitoris or any clitoris exposed
under the red light of the highway piercing parlor, all the strangers
in the dim waiting room turning the pages of celebrity magazines
hearing her yell out, and yes, I know my revulsion is not
a very compassionate emotion— and I remember once seeing
the number of Americans who are into genital piercing
and thinking that there are more people who are into genital piercing
than read contemporary poetry or read any poetry—
just like there are more marketing specialists who get off on
dressing up as Anime characters for toy robot conventions
at highway Hiltons or join clubs to develop their skills in pet ESP
or drink neon-blue Mentos-flavored martinis while they trade stories
about the years they spent selling dancing-Snoopy-decorated bongs,
imitation Guatemalan glow-in-the-dark worry dolls and waterproof
guides to automotive meditation from the back of their “My Son is
an Honor Student” and “I Vote for Jesus” bumper-stickered vans.

The poem is inspired by a party I went to years ago. My hope is that the speaker is not me, but she may be a bitchier version of me. (I hope in “real life” I am not so mean.) Some of the poem is based on people I met at the party and some from another party a few months earlier. A few things are made up, including the woman talking about genital piercing. A couple of days before writing the poem, I had just been listening to an NPR story about Karl Rove’s father, who was an early pioneer of body piercing, so that makes its way into the poem too.

For the last few years I have been working with the artist Toni Simon on a book-length collaboration. Toni makes small-scale sculptures of Egyptian gods and then we take them out and about to different neighborhoods and take photographs of them. Each section of the project is 8-9 pages. On each page there is photograph and a piece of a poem. I am also working on my own poems. I recently finished a new book manuscript called The Year of Yellow Butterflies and have a bunch of other poems I am trying to figure out the relationships between. I am thinking one section of the next manuscript will be called Fablesque. I have a bunch of poems not in my current manuscript that have a sort of childlike feeling I am trying to put in conversation with one another. Other drafts I am trying to whip into epistolary form, but I am not sure if that’s going to work. I am usually one of those poets who writes all the time, but moving this year threw me for a loop, so I have a lot of beginnings of poems, but not as many finished poems as I would like.

I have lived in Brooklyn for almost 15 years. Most of that time I lived in Carroll Gardens. I recently moved to Ditmas Park/Flatbush. It’s funny—in our old apartment we often saw cardinals or blue jays out the window, but we never heard any birds. Here I wake up and I hear chirping, but don’t see the birds. I am still getting adjusting to the new neighborhood, but I like it. On Sundays, my husband Bob and I like to go out for Mexican breakfast at Cinco de Mayo and visit the little farmers market on Cortelyou.

Recently, after we moved out of an old apartment where we had lived for more than ten years, our landlord claimed that we replaced the refrigerator with a crappier model. It’s just such an absurd idea that I think it epitomizes the mindset of many Brooklyn landlords. (Why and HOW would we even do that?) Something about owning a building in the borough makes people lose track of reality. Friends claimed she was just trying to swindle us, but I think she really believed it.

Well, Robert Hershon and Donna Brook have been poetry parents to me. I love the way their poems find the “crazy” in the everyday. I am really digging Sharon Mesmer’s post-flarf poems. She makes the spiritual “fresh,” free of clichés. I also really enjoy Jean-Paul Pecqueur’s poems for their wit and quirkiness and Christine Hamm’s new poems that blend memories with abject dreamscapes. Answering this question reminds me how many poets have left Brooklyn over the years. I used to always see poets on the subway. Now I just see mediocre poems on posters. (Though amazingly my Metro card had a pretty good poem on it by Kevin Young.)

I love the backyard and the used books at Unnameable, and of course Berl’s, for being a little miracle.

Prospect Park, the tables in front of the Brooklyn Library. In Ditmas Park—Qathra Café and Milk and Honey.

Every time I go to the Brooklyn Museum, I like it more. I think the design of the shows in the last couple of years has really improved. I especially loved Valerie Hegarty’s installation in the period rooms last year. My husband and I kept bringing people there. I also love Brooklyn’s outdoor concerts and films, especially at Celebrate Brooklyn. And street fairs: I love to buy nail polish and eat bad Thai food in the street. Now that we moved, I am looking forward to hearing more music at Bar Chord. My favorite places to get food are A Taste of Georgia on Kings Highway and the Tibetan restaurant near me. My husband and I used to go to Zaytoons a lot before we moved out of Carroll Gardens. I miss it. I also miss picnics. I am looking forward to having more in the next month.

David Shapiro’s new book in manuscript, Cardboard and Gold. It’s full of moving and playful elegies. There’s an openness about many of the poems that remind me of loose watercolor paintings. I also loved Gillian Conoley’s new book, Peace, for the way that the social and the political are so organic. It never feels like she is trying to write a “political” poem—the political is part of the texture and substance of being alive. I also really dug Brandi Homan’s Bobcat Country. My students would say “it’s relatable” (which drives me crazy), but there is something about the juxtaposition between the kitsch and the vulnerable that I find moving.

I celebrate all things glittery
And what I collect you should forget,
For every lost me as good a new you.

Originally I moved to Brooklyn (in ’99) because I wanted to be around poets. I found a room for rent on the Poetics List, and it was easy to feel part of “a community,” even if that community was formed of people who felt they were on “the outside.” I went to high school in Brooklyn, so it has always felt like home in a way that no other place has.