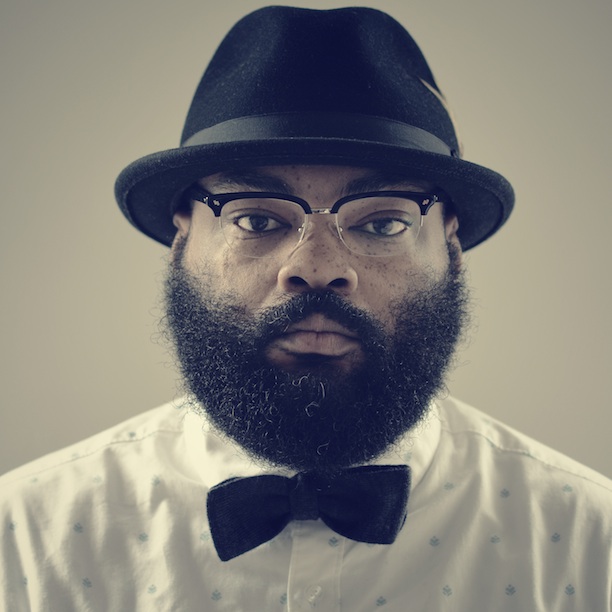 A. H. Jerriod Avant is a native of Longtown, Mississippi. A graduate of Jackson State University, he is one of the newest members of the Affrilachian Poets. Jerriod is an alumnus of the Callaloo Creative Writing Workshop at Brown University in Providence, RI and a 2013 Pushcart nominee. His poems have appeared in the Louisville Review, PLUCK!, A Narrow Fellow, Rumpus, Callaloo, Pinwheel, H_NGM_N, Madcap Review and are forthcoming from Lumberyard. Jerriod is currently an MFA candidate and Writer in the Public Schools Fellow at New York University. He lives in Brooklyn, New York.

With one wrong step, the carpeted hallway floor will show
you its appetite for ankles. The creaks go unheard for the

footsteps are louder. It is a faking give, as if walking through
a hammock that won’t fail. Without care for boot, heel, sandal,

sneaker, the gait, the need heading to the bedroom your
parents made love in, it can be a lonely walk. One stuffed

with memories of how when you and your Dad would pass
through, you had to turn sideways so you and he could fit.

Other times, you just waited at the end for him to parade through,
just white underwear, headed to answer the front door, proudly

unashamed and huge. The photos hang in the hall, lit by
leftover light from the connecting rooms. These mementos,

back wall. Given in synch I suppose, is a botanic rainbow offered at
his funeral, the end of a physical life filled with gusto, 3-year-old

gifts that won’t stop panting. I often ask what is it about hallways
that makes them seem smaller after time. My friends say, it’s the

fact that your ass has grown up and because you’re bigger, the
hallways get smaller. But I know that hallways don’t physically

shrink the same way that grapes give up their smooth skin while
drying in the sun. And if hallways did, it’d mean they were no

different from raisins, and that my Father’s death somehow
brought out the sun. But there are no rays of sun, no sweeter

song here and the hallway isn’t dry it just feels empty like other
tombs that miss their Pharaohs. I know that perception is real and

reality to some. I also feel the still air fill the hall when I’m back
home as I nearly grunt to drag myself through its groove like I’m

a corpse in a body bag of black leather. When I enter the room,
I can’t help my eyes being blotted by the stack of newspapers

and magazines covering the precise 2/3rds side of the bed
where he’d sleep. Just enough space for my Mother to

sneak under the covers after she has stayed up as absolutely
late as she could. She nods off in the front room rocking chair

to late night talk shows. I wonder if she ever makes notice of
herself. It’s a long walk to wonder what fear she faces, what

fear she avoids each night without him laughing, laying next
to her. It’s time-taxing for me, but I’m much younger and years

quicker to step. But for her, what’s the pace? Does the ghost
she might see but never share, slow or help pass the time? Am

I, a body bag of sadness trying to relieve her of any hint of grief?
Does she notice it? Or when she sees any one of the three of

us, their children, is she looking for the most familiar traces of
him? I want her to find him in each give of the carpet, in every

creak of the worn flooring nailed throughout the dry hall, each
memory on both hallway walls, each petal offering oxygen to

replace the thin air. I want her to flesh him out of thin air.

This was soon after returning to Louisville, KY from a trip home to Mississippi during the spring of 2012. Dad died in ’08 so some time after I became very observant not only of my own emotional condition left by his physical absence, but also the emotional condition of my mother and two older brothers having been affected by that same absence. Sitting in my apartment in Louisville, I started digging into recent and childhood memory and writing these things down. I remember wanting to capture on page what going home now felt, looked and sounded like, all the way down to the footsteps, the carpet and the spots in the floor that were weaker than others. Trying to fit these pieces into the poem was very important for me. I wanted to recreate that space, its slowness and pain. Though each of us are different and may process pain and loss in various ways, I grew curious as to what was common amongst us inside our distinct processes. It was quite spooky to watch those newspapers and magazines cover my father’s side of the bed; and heartwarming, when we talk about attachment and loss simultaneously.

More of the same, along with several poems where I remember and revisit the church I grew up in. The southern United States Baptist church is jam-packed with tradition and social formations that have shaped how I see many things. Am I breaking out of these traditions and formations? Am I embracing them? In part or in whole? Those are some of the questions I’m digging toward with a stupid amount of ardor. There are also several poems involving alcohol abuse and genetics; there, I’m just trying to save my life.

Most of it feels like Mississippi when I’m walking in the neighborhood. It doesn’t feel that way because of the density or the gentrified blocks, but because of the cultural aesthetics that are still intact. The music and grill smoke in the air from a storefront on a sunny weekend is the trunk of a car blasting in the yard where the grill is in Mississippi. Especially since the weather has been amazing, the gathering on the stoop, sitting through conversations and beer happens the same way on porches and tailgates in Mississippi. It feels good to speak to people in passing the way it’s second nature to do so in Mississippi. When someone speaks to me and says, “What’s up, Black” or “What’s up, Chief” or responds to my speaking by saying, “I can’t call it” or “You got it,” it resonates with the greetings I hear all the time from loved ones and strangers in Mississippi to the point I can hardly tell the difference. I don’t have to change anything about me or about Bed-Stuy and I feel at home, safe, welcome, and that I belong. I’ve fallen in love with that.

Spike Lee’s Do The Right Thing Block Party. The DJ’s were dope. Mos Def spit a few verses. There were activities for the kids. Grill smoke was in the air smelling lovely. People were dancing, Storyboard P was there making folks’ eyes bulge in the best way. It was a harmonious occasion; a defining and uniquely Brooklyn experience. It has been the Brooklyn highlight of my summer so far.

Yasiin Bey (formerly Mos Def): his work is usually layered, always emotional, very chiseled (metrics) yet smooth & effortless, his content always matters. Nicole Sealey: for those very same reasons. She’s the calm storm that knows its might, yet dishes it with a level of control I rarely see in poetry. No “filler” in her work and that challenges me to think clearer about language, its uses and what my genuine plans with it are.

Berl’s Poetry Shop. They have the broadest selection I’ve ever seen in poetry. I’m sure this is because its focus is poetry but it feels very well curated and not just a selection of prizewinners and best sellers. There’s a great selection of well-made small-press books there to catch your eye as well. I love it. It feels like art and not like a bookstore. All bookstores are not created equally.

Breukelen Coffeehouse is my jam, jelly and preserves. The atmosphere always feels as if everyone is concentrating. That can be and most times is, contagious. It has the perfect amount of noise and the brothas controllin’ the music in that joint got playlists I’m jealous of. Bedford Hill is cool too. On Sundays, though they only have one table, I love sitting in and eating in at Jamaica Grill on Nostrand Ave. Something gets penned every time I’m there whether it’s good or not.

William Faulkner’s short story “The Bear” which appears in his short story collection Go Down Moses. In investigating my home (Mississippi) and my family’s connection to the land there, Faulkner is providing useful tension that frees me up to question why, why not, how long and whose, when I think about Mississippi land, soil, crops and the people whose bodies are most connected to it historically. Fred Moten’s poem “the derosiers of sevier” I imagine must be, to some, no different from Lance Stephenson blowing gently into the opponent LeBron James’s ear. It’s bold. The language is fresh and multimodal. It’s got a ghost in it. That ghost is the speaker. It’s tragically aware and glorious. Also, I recently ran across a poem called “Jacket Notes” by Ishmael Reed, which articulated a feeling I didn’t have the words for at the time. Ossuaries by Dionne Brand and King Me by Roger Reeves keep me fed.

I celebrate, I’m told, too seldom, me,
And what I fail to love you should let love you,
For every beat in the heart of me as good be beats
of a song, for you.

I’ve always wanted to live on another planet.