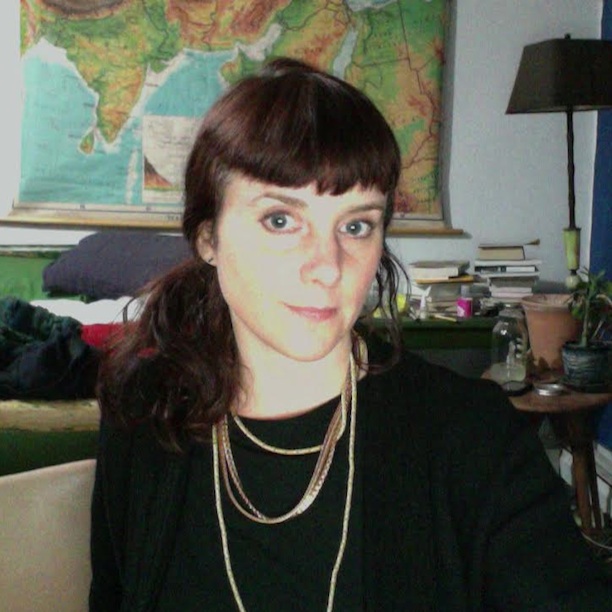 Alex Cuff is a poet and public school teacher living in Brooklyn. Her writing can be found online in the Recluse, Apogee Journal, Sink Review, Two Serious Ladies, Bling That Sings and Leveler, and is forthcoming in 6×6. She’s a graduate of the Milton Avery School of the Arts at Bard College and co-founding editor of No, Dear magazine.

I am digging up potatoes and find the mother

Like all mother spuds it’s rotten to the core

So that others can live

This guy says he likes when I’m sexy

He calls me Simone instead of Alex

In my mother’s dining room

This guy pulls out his dick

Swings it toward my stomach

I know I’m in big trouble

If I pay the slightest attention

The wall-papered room is a small rocky cliff

A peninsula surrounded by water

Someone has set up a cocktail lounge on the sea floor

I dive down and mix a drink

I am drunk with the lions

Their manes are humiliating

I spend the next ten years searching for that rocky cliff

Waiting in line for a public bathroom

I remember the girl stored in tupperware

My call to keep her alive

His body attached to the crag of a mountain

A heavy wind bends us back like a lever

We snap and crash onto the rocks

I spy a living man hiking up the hill

I ask him to save me from the crag

My mother accuses me of trading danger for sex

She is naked and wrapped in saran wrap

I’m kneeling on the ground

My head between the knees of this guy

His right hand between my legs

I’m informed that I will need to die by hanging

I stress about which pants to wear for the event

I’m acutely aware of the exposure of my body

The twisting and turning of the rope are in play

My mother hangs the windows with drapes

The room fills with smoke

My daughter asks me to change into a polka dot skirt

I visit the Jefferson branch of the library

I’m confused by her request

I study the past until I am learned and silent

When the house is demolished

I let others pick up the pieces

A man sends me to his friend’s private library

For a white tome titled HERE AND NOW

He explains the premise

A collection of logical fallacies

He says I owe him dinner for his brilliance

I butter both sides of a roll

I double up the body bag

I follow his logic and pick up the check

I note the past tense when I speak

All my verbs are in the subjunctive

When autumn ends I settle on winter’s length

Nothing is slated to happen for years

I walk through the house dislodging

I stand armed in the kitchen until morning

This poem was mined from dreams. It’s a collage. It began with a potato dream. I’ve worked on a lot of farms and have a love/hate relationship with digging up potatoes. Similar to digging for shallots, it’s like finding buried treasure but you only have your hands to guide you. That’s the cool part. The shitty part is sticking your fingers into the rotted planter potato, the mother. At the time I patched the poem together from recorded dreams, I had been thinking about a chapter of The Queer Art of Failure where Judith Halberstam writes of a shadow feminism that “speaks in the language of self-destruction, masochism, an antisocial femininity” in order to disrupt the inheritance of the “relationship to patriarchal forms of power” from mother to daughter. A fraught mother/daughter relationship emerges in much of my writing and I am interested in what I understood to be Halberstam’s permission to destabilize this sacred relationship, to offer a possible out for the daughter, risking the violence of separation from the mother and family bond, for a new way of relating to the body. I like that as a lens to think about the suggestion of sexual violence in some of the images in “Dirt.”

I’m trying to figure out how to respond through poetry to racism while remaining focused on my own experience, as opposed to trying to frame other people’s experiences. So basically I’m trying to write about whiteness. I’m interested in naming whiteness and making what is often invisible (despite its pervasiveness) more visible. Right now this consists of one poem published this year at Apogee Journal, lots of notes, unfinished poems, and an idea. Part of this project is a piece that’s provisionally titled “An Extremely Incomplete History of White Affirmative Action” which wants to explore the ways in which I’ve benefitted, as a white American, from institutional racism. Right now it’s more or less a timeline. I’m also trying to gather/sequence poems about family, which I’ve been writing over the past couple of years, into a manuscript.

A good day is a day with as little social interaction as possible. A day in which I may accomplish something concrete (like re-pot a plant) plus score a couple or a few hours in my bed reading, leaving it only to eat or pee. Maybe there’s a slice of pizza from Carmine’s on Graham Avenue. After a day like this I wake up feeling like I’ve robbed a bank.

I moved to Williamsburg in 2003 when I got a job teaching at a high school on the corner of Bushwick and Grand. Twelve years later, in the same apartment, the neighborhood is my home and the place in which I’ve lived the longest including childhood homes. I have five housemates who are basically my family. I live next door to a former student whose grandfather owns the two buildings on either side of me. I’m surrounded by familiarity and it feels very much like a neighborhood—“East” Williamsburg hasn’t flipped as dramatically as the north side has. However, as it goes, I just learned that the landlord is selling my building so I’m not sure where my next home will be. My parents grew up in Bay Ridge, where I was born, so I’ve thought about moving out there. Maine and western Massachusetts are always looking good, too.

1. I left my wallet at my sister’s apartment in Chelsea and was still able to run Sunday errands in my neighborhood: laundry at the laundromat, produce from the fruit and vegetable market, coffee from the coffee shop and beer from the bodega—all on credit! That’s what I associate with home. Knowing the folks who run the businesses in the couple-block radius of my apartment and they knowing me well enough to take my word that I’ll pay them back.
2. Q train to Coney Island: Cyclone.
3. Biking to Fort Tilden.
4. And, a defining Brooklyn experience, unfortunately: as a gentrifier, getting out-gentrified. Housing insecurity. Navigating the ethics (and confusion) of where to go next when your home can’t be your home anymore.

Bernadette Mayer because she’s outrageous and beautiful and I was introduced to her by one of my favorite poets: Lisa Jarnot (Queens!). Not surprising, I admire the writing of many friends (and friends of friends), too many to name, but to name a couple who are dear to my heart: Mirene Arsanios (formerly BK), Emily Brandt, Marina Blitshteyn, Charity Coleman, Camonghne Felix, Steven Karl (formerly BK) and Jon Sands.

Greenlight, Unnameable (grateful for the readings they host) and Spoonbill & Sugartown because they are there for me in walking distance and are holding it down on an otherwise scary strip of Bedford Avenue.

Besides while riding the subway or jotting notes while walking, I really only write at home. I’ll read anywhere but I prefer the train, the beach, a park bench (I love McGolrick in Greenpoint), or the walk from the train to my apartment.

I like walking Grand Street until it ends at the East River. BAM in Fort Greene. The McCarren park farmer’s market on Saturdays. The city pool on Metropolitan and Bedford. The plant section of Crest Hardware on Metropolitan. Greenhouse Holistic. Light Industry in Greenpoint. Ahn Hardware on Grand at Leonard.

Thou by Aisha Sasha John. Argonauts by Maggie Nelson. Hart Island by Stacy Szymaszek. You Da One by Jennifer Tamayo. Night Conversations with None Other by Shreela Ray. A Problem of Memory: Stories to End the Racial Nightmare (collection of interviews).

As the rents go up, I often ask myself the same question. And I have rural fantasies. But for now, Brooklyn = Community & Home so here I am.