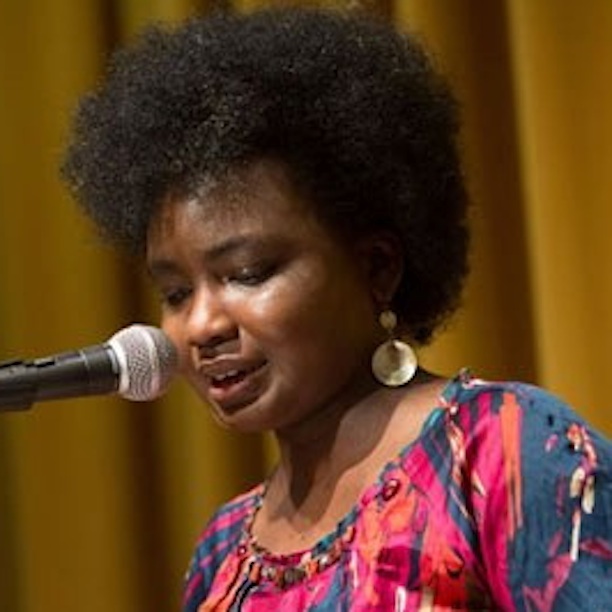 Amber Atiya is the author of the chapbook the fierce bums of doo-wop (Argos Books, 2014). Her work has appeared or is forthcoming in the Atlas Review, Boston Review, Apogee Journal, Anti-, Muzzle Magazine and elsewhere. She received a 2013 Pushcart Prize nomination, a fellowship from Poets House in 2012 and is a proud member of a women’s writing group celebrating 12 years and counting.

The plan was to write a three-part performance piece based on the Three Feminine Sorrows:

There was a five-page outline, a desktop folder full of articles, and Warrior Marks: Female Genital Mutilation and the Sexual Blinding of Women, a collaborative book written by Alice Walker and Pratibha Parmar that I found at the Strand.

But this poem survived.

Well, Argos Books is putting the finishing touches on my chapbook, the fierce bums of doo-wop, due out this fall. (Yay!)

Mostly, I’m focused on my full-length manuscript—writing new poems, exploring the visual possibilities/functionality of poetry. I’d like to include a bona fide order of protection in the book, something that can be torn along the perforated lines and used if necessary.

One that begins with a cup of Sanka (two sugars and milk, WHOLE milk, please, thank you) and ends with a few screwdrivers.

I live in South Jamaica, but I’m from Flatbush. (I miss Brooklyn so much, you don’t understand.) I’ve also lived in East Flatbush, Ocean Hill, Bedstuy, Downtown Brooklyn, and what’s now being referred to as Lefferts Gardens. Back in the day, it was Flatbush or Crown Heights depending on who you asked.

I miss being within walking distance of Prospect Park, the Botanic Garden, the Brooklyn Museum. I miss Mike’s Diner, which made some hella good eskovitch fish and the best beef roti in town. I miss the Labor Day Parade, Mas Camp set up on Flatbush and Lefferts Avenue. Le sigh.

Queens is a whole other world where folks actually line up to get on the bus. I’ve been told by people from Queens that the troublemakers who refuse to follow protocol are almost always from Brooklyn. How they could possibly know this is beyond me.

“Yo, this goes out to my cats in Coney Isle/Friday night out in front the Himalaya goin wild.” Yasiin Bey aka Mos Def said that, and he ain’t never lied. Friday or Saturday at Coney Island was LIVE after 10pm. The Himalaya was everything, the DJ was everything, it was an outdoor party. Add an order of Nathan’s fried frog legs and a water bottle filled with vodka/Sprite to the mix, and you’ve got yourself a perfect night in Brooklyn.

Also, on Easter of ’88, my friend’s aunts took a crew of us to see School Daze, which is nuts because we were mostly seven and eight years old. Plus, there was a baby in a stroller. I remember my hair being straightened and white patent leather shoes that click-clacked on concrete with every step. I remember ruffled socks and a frilly pink dress. I remember all of our faces being quite greasy from Vaseline, you understand. A fight broke out near Newkirk train station. Next thing I know, gunshots go off and a bunch of people are running in our direction. I remember being scared shitless, all of us turning to run. I remember one of the aunts tripped and the stroller flipped over and landed in a dirt patch, and I don’t remember the baby crying (though it must’ve been crying), but I do remember, vividly, the rear stroller wheels spinning, their silver spokes spinning.

I’m partial to activist poets/poets whose work is socially and politically relevant to the times. That being said, I love Martín Espada and Cathy Linh Che.

Same as above … any seedy dive holding on by a thread, though they’re almost impossible to find.

I’m a huge fan of Split by my friend Cathy Linh Che, Blood by Shane McCrae, and Chinoiserie by Karen Rigby. And I absolutely cannot stay away from Lynda Hull’s Collected Poems. I’m particularly fond of “Lost Fugue for Chet” and “Suite for Emily.”

As for individual poems, I recommend the following:

“We Should Make a Documentary About Spades” – Terrance Hayes (Vinyl Poetry, Volume 7)

“The House” – Warsan Shire (The Wide Shore): If she ever does a reading in New York, man, I am so there.

“It Do What It Do” – Krista Franklin

Good grief, I could go on and on, but I’ma stop right here.

I celebrate EBT,
And what I fry and bake and braise with my own hands
you should feast upon,
For every meal that strengthens me as good will strengthen you.

(FYI: I ain’t been a Jay Z fan since “Brooklyn’s Finest,” and I want the world to know. Also, I wrote the poem, but, to paraphrase Dave Chapelle, if it sucks, just remember: you asked for it.)

homeless senorita sings sin, sin
without, without what—pen-
is? clitoris? yes, yes i could jack
you for yours but what i lack makes me love-
ly, neither he/she, mother/father
leashless i jump the fence, brooklyn
rub my stomach, fetch body, good body, call it runt, rob
ruby, a rappin badass like pac       like biggie

Chile, please. Don’t get me started.