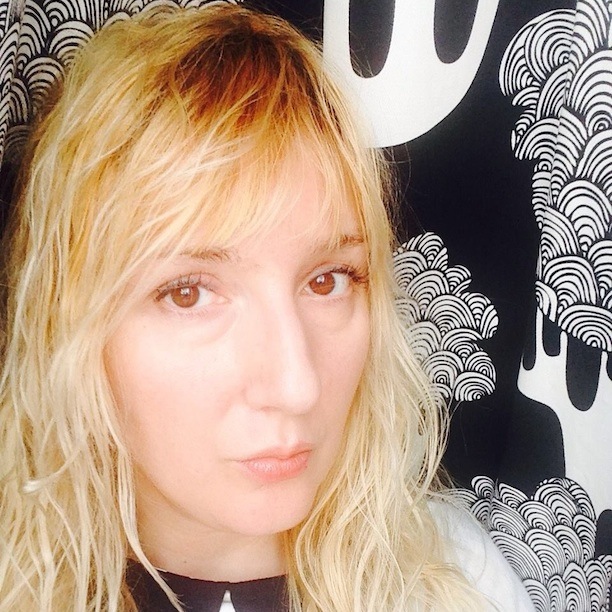 Ana Božičević is the author of Stars of the Night Commute (Tarpaulin Sky, 2009) and Rise in the Fall (Birds, LLC, 2013), named one of the top five poetry books of 2013 by Publishers Weekly. She studies poetics and teaches at the CUNY Graduate Center, works at VanessaPlace Inc., and makes poetry films. With Sophia Le Fraga, she performs as not_I. She will read for the Brooklyn Poets Reading Series on Friday, February 21, at Studio 10 with Jeffrey Pethybridge and Thomas Heise.

I wanted poetry to do everything for me.

trinkets at night. It was an ongoing Xmas,

some one told me this was bad for any affair.

Others sang I was too clever and mean,

a snob. They cursed me with hotel curses

so every place I went to then became a hotel,

my friends just staff, for all the hurt I gave them.

I took it. Some other one was silent on how

I just wasn’t too smart. The one thing

they agreed on is I should stop talking. I did.

I went into the wood. I walked for a long time. One dark

horseman rode by, and it was pitch-black. I walked

on in the undeveloped darkness. It crunched

I ran marathons, rescued dogs from a fire,

made love to a trans

amphibian. Then a red horseman galloped

through and the sun shot straight up. I could see

the glitter on the blanched leaves. I walked up

to the cottage. She was inside. What do you want,

she said. To please take away this

I can feel it. It’s making me not able to talk. But

aren’t you talking to me, she said. Yes, but

makes you think, she said, that you’re not?

Suddenly I felt my teeth growing in. See,

that me you wanted back never stood

a chance. But what about poetry? What does it

do? She laughed an uproar, pointing

was nothing. What does this mean? I asked.

And the leaves laughed up an uproar.

Wait, what does it mean? Leaves shot higher

up into the green clouds, an uproar of leaves!

When I read “The Curse,” I introduce it as “the autobiography of my poetic career in the United States.” It features special guest Baba Yaga, a figure from Slavic folklore, a deity really. But whom she personifies and everything else that’s going on in the poem I have a resistance to talking about. Don’t take it personally–it’s personal.  : )

I’m working with myself and with others. Writing loose poems and making little films for the new thing after Rise in the Fall, now called WINTERFACE/epitaph (W/e). (I run a poetry text message service you can subscribe to for occasional transmissions: to begin, text the word EPITAPH to 555888.) Then I am also working with the artist/poet Sophia Le Fraga, whom I am with: we are beginning to perform as a duo called not_I and we aim to expand on the current tropes of poetic performative subjectivity (!) You will see some of that at Brooklyn Poets. I work for VanessaPlace Inc. And on a series of gif/poem collaborations with Sampson Starkweather. Writing and publishing Rise in the Fall really wiped me out, and collaboration brought me back to life, in the sense of a poetics based on covenant. I had to go out of my poetics and out of my medium to find them again.

I’ve lived in Brooklyn for 15 years, all over. Over the years got priced out of Williamsburg, and the building where I lived in Prospect Heights was razed in the construction of Barclays Center. Right now I’m in Lefferts Gardens. I love that my apartment is huge and beautiful and cheap, and that I share it with Ryan Doyle May and his cats Harrison and Sabine, and we live close to other poet friends. It’s a clean and decadent household. The neighborhood is perfectly residential, and residentially perfect–the trains, the park, the architecture–I only don’t like the thought of losing it–losing another one. C’est la vie.

Idk; walking around Williamsburg and seeing a regular bar where there was the salsa parlor where they had coke, Kokie’s. You can read about it on VICE. The plus ça change nature of city. The sinking feeling that Brooklyn has become as natural to me as Croatia. Which means it might be time either to go someplace else, or stay here forever.

Obviously Berl’s–friends running bookstores are my heroes. The usual suspects: Unnameable, Mellow Pages … I have a weakness for intuitive, Borgesian spaces like The Community Bookstore in Cobble Hill, with dust and books en masse.

I only write and read at home and on the train. I don’t go to coffee shops, because I’m easily distracted. Other than that I just like to walk all over and think. Like you.

Wherever I get off the train and walk. I take pictures of awnings and signage … Lincoln Park Tavern, my neighborhood bar and restaurant. Recently we had a pretty transcendent dinner at Miller’s Tavern in Williamsburg. After so many years here, I rely on others to take me on their Brooklyn trips. Moi, I like the food really really good and the place almost a bit transparent. I like to take guests on the Brooklyn Bridge.

There was no need to fill them out.

I celebrate,
And what I? You should:
For every me – as good: you.

May I return the question: Why, Brooklyn?