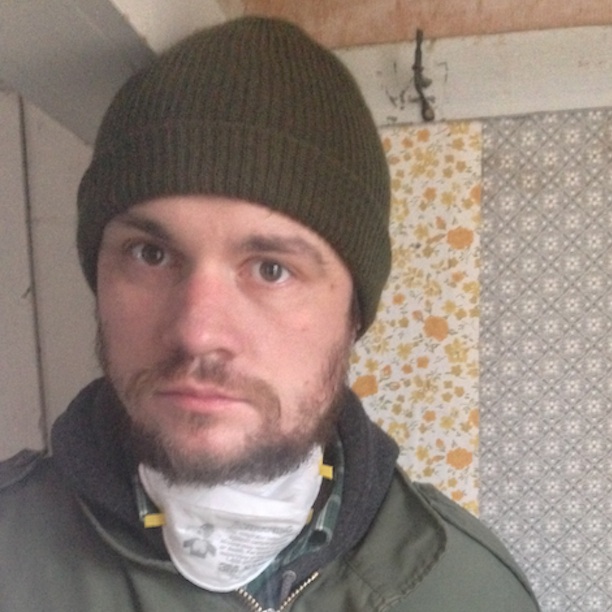 Ben Pease is a board member of the Ruth Stone Foundation, which is currently in the middle of a major renovation of Ruth Stone’s home in Goshen, VT (and just launched a fundraiser to address some critical structural issues with the house). Pease holds degrees from Emerson College and Columbia University and is an editor of Monk Books. His first full-length collection of poems, Chateau Wichman, is forthcoming from Big Lucks Books, and more work can be found online. He lives in Brooklyn with his wife, the poet and artist Bianca Stone.

Daphne caressed her arms
as if she were rolling up her sleeves
and said “why don’t you come over
for a smoke”
The Wichman would never
decline an invitation
but stipulated “I will only
go as far as the threshing floor”
he received a metal cigarette
in his palm and thought “who
can behold these two hands
of mine
who can steady
this [manifold] mind?”

This is a key poem that gets the story going in Chateau Wichman. The Wichman is aided/trolled hard by a group known as The Sage Editors, and there is no way The Wichman would have the full text from the lunar plaque on his fridge by himself. I always think about how the font used for this plaque was Futura because how many fonts have the distinction of being currently on the moon? On the other hand, of all the presidents of the United States, Richard Nixon’s name has to be up there, so there’s the good and the bad.

This poem also introduces square brackets into The Wichman’s speech. It’s purposefully unclear how powerful and technologically adept The Sage Editors are, but as the poem proceeds, one technique they increasingly use is to replace the words coming out of The Wichman’s mouth. We see this for the first time in the last line of the poem.

Finally, this is the first scene where Daphne appears, and while she begins as just a chill neighbor looking to share some weed, she has her own struggles escaping from the grasp of The Sage Editors as well (her outfit in this scene, her new apartment, and even her name are not her own).

I’m working on a long piece called Fugitives of Speech, which is a furthering of a lot of elements I started with Wichman. Where Wichman is basically a story with one main character and a small group of strong secondary characters, Fugitives of Speech has a large ensemble cast with six main characters and a lot of others who pop in and out. The work combines poetry, drama, home movie scripts and prose and takes place in my hometown of Ludlow, MA from 2003-2004. One of the characters is also a psychic who occasionally travels into the minds of people living when the town was much younger. It’s a study of how place affects people, and it documents a group of friends trying to be creative in a community that doesn’t prioritize that kind of thing at all.

Three things make up the average good day: helping my students break new ground with their writing, spending quality time with my wife, Bianca Stone, and making progress on my own writing in some way. If I can find some mutual free time to see or talk to friends and family, that puts it over the top.

It’s been a little over five years now. After two years in Manhattan, I started out in Greenpoint and Williamsburg, and Bianca and I have been in Crown Heights for about three and a half years. We have a good relationship with the people in our building and the landlord. The landlord wrote Bianca a nice note after we got married, and the super was happy to stop in and feed the cat over Thanksgiving. The greatest pizza in Brooklyn is a block away from me, Rosco’s. They have Galaga and Pac Man (think it’s broken at the moment though), frosted mugs, and the rare combo of amazing basics (plain, pepperoni, white) and sick specialties (like roasted garlic and sopressata). I often meet up with friends at The Crown Inn, and this miniscule sushi shop just opened up right next to us, Silver Rice, and it’s got some real fresh fish.

A few years back I had the opportunity to read at the Projection reading series in Brooklyn. At the time, I taught basically a double shift that day, 9am-noon and then 4pm-10:30. Someone covered my classes that night, but I told my students they could come to the reading instead if they wanted. A small group came, and at the break I was sitting outside with a couple of them. This one guy’s name was let’s say Roger─that’s what it said on the roster, and he never asked me to call him anything else. As soon as he introduced himself to some of my friends, however, he called himself Demitri. We wear so many hats in this city: why not have a different name for each one?

Whitman was there early for me in high school, and I still like to do a yearly reading of “The Sleepers.” And now my mind is stuck on couples and their individual (and sometimes collaborative) bodies of work: Ted Berrigan and Alice Notley, Brenda Shaughnessy and Craig Morgan Teicher, Sampson Starkweather and Paige Taggart, Sophia Le Fraga and Ana Božičević, Ben Fama and Monica McClure. Bianca Stone is my favorite everything though, and I am blessed that I get to hear and see her work every day.

I try to order stuff directly from the publishers; otherwise, I’ll pick it up at Berl’s!

I love reading on the train; it’s almost like I have reverse motion sickness and read in order to feel better. When it comes to writing, I exclusively write at home. I’ve got a desktop with a two-monitor setup that allows me to have my work up on one screen and a hundred tabs open on the other.

I always find walking around Brooklyn is one of my favorite ways to take it in. I try to walk home from work once a week from Borough Hall, down the Fulton Street Mall (as mentioned in this), past the new Atlantic Center, and I’ll often stop to eat somewhere on Vanderbilt before heading home.

I celebrate all those who are suffering,
And what I receive without asking you should enjoy
just the same,
For every part unalienable to me as good belongs to you.

This is a surprisingly difficult question when a lot of my heart is in Goshen, VT with the restoration of the Ruth Stone house and all the great things we want to do there. I always joke that any day where I have to go to Manhattan is a loss. There is so much to love about Manhattan, I have a lot of great memories from spending time there, but I feel more out of place every time I go there. Brooklyn still feels like home: constantly inspired by poets and artists from all walks of life, amazing food (how I can get a Korean bbq BURRITO delivered to my door will never cease to amaze me), and so many unique events and locations.