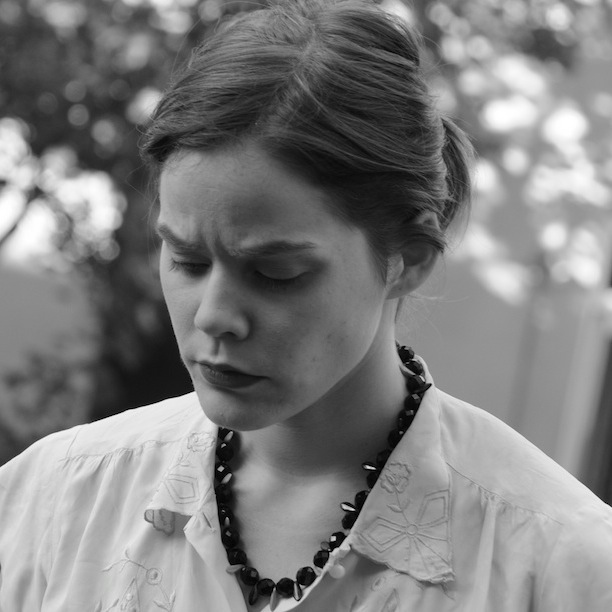 Bianca Stone is a poet and visual artist. She is the author of Someone Else’s Wedding Vows (Tin House/Octopus Books, 2014) and several poetry and poetry comic chapbooks, including I Saw The Devil With His Needlework (Argos Books, 2012), and I Want To Open The Mouth God Gave You, Beautiful Mutant (Factory Hollow Press, 2012). She is also the illustrator of Antigonick, a collaboration with Anne Carson. She is the editor of Monk Books, a small press that publishes limited-edition chapbooks of poetry and art, and the chair of the Ruth Stone Foundation, an organization honoring the work of her grandmother, poet Ruth Stone.

The Future is Here

Man burns at a certain degree
but I always burned a little slower.
When I went into school
I left a trail of blackened footprints
to my classroom of spelling words,
never starred. At the end of the earth
we’ll be locked in our own spelling mistakes,
our arms around the legs of our mother
so she won’t leave, our heads filled with beer, the light
receding. What kind of death is reserved for me?
The green plastic soldier has his gun up against everything.
And what does one do with a gun really?
I’ve only held three my entire life.
The third I held was the first I used.
I was with Rebecca and her father, deep in the woods of
Vermont
when she was staying with me in the heap.
I shot at a beer can until my hands went numb.
And I loved her the whole time.
With car accidents and barbiturates. The way
she got wasted, knocked her teeth
into her lap and told me
I loved her too much—what was all that?
What man does is build whole universes out of miniscule
disasters and educational degrees.
I have mine in an enormous envelope two feet behind me.
My name looks good in gangster font.
It makes me want to alight
on the thigh of my beloved like a moth
because I know all careful grief
comes out from behind the thigh
and makes a fist at the grey sky above Brooklyn.
The destroyed continue
into the snow-filled future, shoveling.
And love is either perpetually filthy
or intermittently lewd.
I’m sweeping the entire apartment because it’s mine forever.
And that’s valid, too: domestic eroticisms. The way
he gets up out of bed before you
and puts on clothes and can’t find his keys.
All of it, without parents, without children, without roommates.
It feels good to get something
back. And the whole feels
detrimental and complicated and forever stimulating.
Which is why we live—and why we send out
balloons into the atmosphere
with notes tied to them that say
Nothing bad can touch this life
I haven’t already imagined.

One of those great moments for a writer when your first line haunts you into writing. You know what I mean? It disturbed me until I realized I had to write it down.

I wrote it last year when so many shootings had happened. Thinking about my youth, then thinking about guns. Last year I think the whole country was wandering around baffled, thinking “GUNS. What do we do with guns? We shoot them. Do we need them? WHAT THE FUCK IS HAPPENING?”

I wanted to end with hope. I wanted to see a possibility of humanity that year. I ended with a line that is more ironic, wishful thinking: “Nothing bad can touch this life / I haven’t already imagined.”

A new hybrid book of poetry and prose that’s based around the year after my grandmother’s death and Philip Guston’s lectures. And also a new full-length poetry comic book. It’s all bleeding together, really.

Feeling somewhat cheerful; not consumed with self-doubt and depression; writing a good poem. Ending with drawing while I’m watching Dr. Who.

When I first moved to Brooklyn I lived on the Halsey Street L stop (Ridgewood/Bushwick). Totally a dumpy apartment, but I loved it so much. It was my first-ever apartment, and I was starting the MFA program at NYU. We had so many amazing poetry salons there! I had to walk seven blocks to the laundromat.

Now I live in Prospect Heights (Franklin Ave and Park Pl). It’s one of those areas that is just exploding right now. I live with my fiancé, poet Ben Pease, and our fluffy fat grey cat, Russell. My favorite restaurant here right now is Mayfield. And Hullaballoo Books just opened and is so cute.

Well, I’ve had bed bugs like five times. First on Halsey street (O how I MOURN my pink toile arm chair and my antique furniture I had to throw out)–the “exterminator” finally showed up, and was a 16-year-old kid with a spray gun who knew nothing. Then we had them again when Ben and I lived on Maujer Street in Williamsburg. In the latter, we. kept. getting. them. It was a nightmare. Finally, I was able to break our lease because of it, and we moved here. So glad we did. That place was a shithole. Year two in Prospect Heights and so far so good!

So many fabulous poets I know here. Too many to name …

Anne Carson (part time Brooklynite) because I love her tone, and her detachment that manages to feel so intimate.

Whitman, of course. Because, my god, is there an equal?

Unnameable Books has a fantastic poetry section. They carry lots of small press stuff. They have new and used. It’s lovely.

In the summer I love to read in Prospect Park. But I prefer to write indoors; one place I was frequenting to write was Crown Inn.

I love walking from my apartment down through Park Slope, past the Brooklyn Museum and the Botanic Garden. And also BAM is really one of the best things about Brooklyn.

–May We Be Forgiven, by A.M. Homes
–The New York Stories of Elizabeth Hardwick
–Aorta, Christopher Salerno

I celebrate delivery,
And what I require you should bring me late at night,
For every dime bag or chicken brochette in me, so good
at home with you.

When it comes in it makes large claims. The father,
typical love, snow in January, the Dodger
with the knife. It lifts up like a jack
so that it’s eye level, totally absorbing into the brain; the robbed
visual cortex. When it comes it’s like trying to figure out the
subtleties of sin
and finding the large burnt-out crop circles in the backyard, or
a pen
in the middle of a book where someone else left off, years ago.
Lighter
now than it was, the bubble opens itself to reveal a core, like love
reveals its horrible, delicious needs. It’s Brooklyn,
only it has you in its mouth. Blazing through the best lines of
Biggie.

Because it’s gorgeous and diverse and I run into my friends on the street.