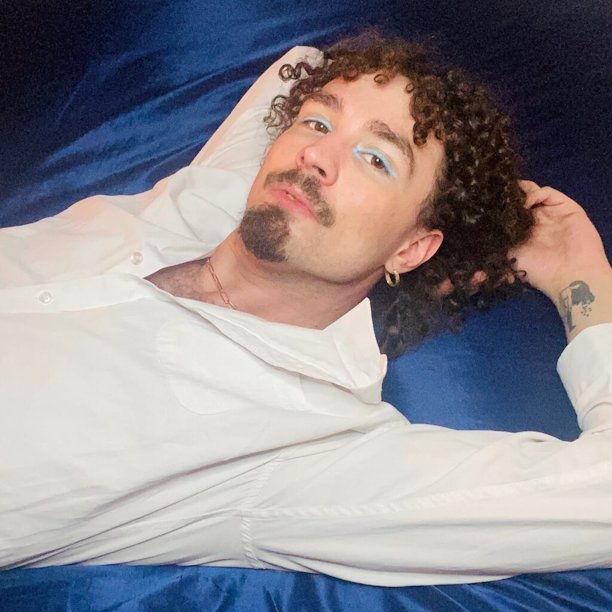 Caelan Ernest is a nonbinary poet, writer and performer. They are the author of two forthcoming collections: night mode (2023) and ICONOCLAST (2024), both being published by Everybody Press. Most recently, their work has appeared in them, Blush Lit, Channel Void, WUSSY, Hayden’s Ferry Review, baest: a journal of queer forms & affects, We Want It All: An Anthology of Radical Trans Poetics and elsewhere. They hold an MFA in writing from Pratt Institute and work as director of publicity at Nightboat Books. They live with their cat named Salad in Brooklyn.

Brooklyn Poets · Caelan Ernest, "put ur phone down for a sec"

I love this poem, and I love performing it, but it was painful to write. I wrote the first draft of “put ur phone down for a sec” in 2018 while struggling with my gender identity, and the only way I knew how to document what I was moving through was to approach it in a conversational tone, as if the speaker is talking to a friend during a pregame before going out to the club. The movement in the convo darts across talking about outfits and drinks and social media, and also gender and identity and theory. At the time, life felt like one big blur—one big bender—which, I think, is reflected in this poem.

I’m currently working on two poetry manuscripts: night mode and ICONOCLAST, both of which will be published by Everybody Press, in 2023 and 2024, respectively. night mode is a book-length serial poem in its final round of edits, and available now for pre-order. “put ur phone down for a sec” is one of the five poetic sequences in night mode. ICONOCLAST is still very much in the research and writing stage, which is, for me, the fun part.

When I wake up next to my cat, Salad, that’s the perfect start to the morning. She’s learned when my alarm goes off, and she’ll start meowing and licking my face whenever I press snooze, which is too adorable to be bothersome. And at least she waits for the alarm before she makes her move!

I moved to Brooklyn from Rhode Island in 2017 to begin grad school at Pratt Institute’s MFA in writing. Many of my friends were already living here, and every time I hopped on the train to come to the city and visit one of their apartments for a weekend, it felt like a home.

Since moving here over five years ago, I’ve lived on the same street in Bed-Stuy, but in two separate apartments a block away from each other. I grew up in a tiny neighborhood, which has a pond surrounding it that connects to some of the beaches in Rhode Island. In the fall and winter seasons, the neighborhood was eerily quiet and still. It’s been refreshing to be here, in Brooklyn, surrounded by the thrum of life all of the time.

When I moved into my current apartment, there was an old church next door that’s since been torn down. Now they’re building a modern apartment in its place. The apartment across from my bedroom was recently renovated, and the owners illegally cut down part of the tree on the property of my apartment building because its branches were hanging over their deck. A neighbor of mine yelled, “You don’t cut down trees in Brooklyn!”—something I’ve been thinking about since.

When I first moved here, I loved going out to local bars and clubs with my friends, and the first spot I began to frequent was the Rosemont. It felt much more intimate in 2017 than it does now. I’d go almost every weekend, and I’d sometimes stay until close, watching drag performances, asking for cigarettes from strangers on the patio, and waiting what felt like an hour in line for the bathroom. I still like to pop by every now and then to say hi to old friends, but I don’t know most of the current crowd.

I’m finding my poetry community every day. My first experience with a real cohort of poets and writers was during my time at Pratt. Now, through my poetry, my work as the director of publicity at the publisher Nightboat Books, and social media, I’m making new connections constantly.

Most of my core group of friends are not poets, but other kinds of artists working in different mediums, which is nice because we approach artistic conversations from different vantage points.

In undergrad at the University of Rhode Island, the poet Peter Covino was my professor, and in many ways a mentor. He tried to convince me to switch my major to English (I studied writing and rhetoric, and gender and women’s studies) when I took one of the poetry courses he taught. He took notice of how performative my work is, and encouraged me to practice reading my poems out loud because I was incredibly shy about my work at the time. Without him, I probably wouldn’t have adopted performance as part of my practice.

Jody Lisberger, a former professor in the gender and women’s studies program, was also very much a mentor to me. Although I mostly studied creative nonfiction with her, her teachings and techniques have stayed with me.

In my MFA program, Laura Elrick was my mentor, and she really helped me expand my writing practice. By the time I entered the program, I’d grown frustrated with my poetry, particularly the themes I was exploring. Laura supported me as I experimented and played with form and sound, and I owe a lot of the making of night mode to her.

Ever since reading it, I’ve been thinking about frank: sonnets by Diane Seuss constantly. I didn’t come into poetry through craft or formalism, so to read a memoir-in-sonnets blew my mind. There’s one poem that I read to my friends as a sort of nightcap, sometimes at 5 or 6 AM, that begins with the line, “Parties among strangers, punks, leather caps and straps, pressing,” and I just love the movement and imagery in it. I often find myself reciting lines from this poem to myself without realizing I’m doing it.

There’s probably at least a hundred books I’ve been meaning to read that I haven’t gotten to, honestly. Punks: New & Selected Poems by John Keene has been on my list for a while, and it just won the National Book Award for Poetry, so I think it’s finally time to read it!

My reading habits really depend on the book(s). If I’m reading something like Nevada by Imogen Binnie, I’ll read it in one go. But there are other books that take me much more time to get through, like the short story collection After the Sun by Jonas Eika, translated by Sherilyn Nicolette Hellberg, which took me weeks to finish because of its visceral, surreal and graphic imagery and language. Or I’ll read and reread as I’m moving through the book, which happened when I first encountered proxy by r. erica doyle. I needed to savor every word.

My favorite kind of read is a book you just happen upon, whether through shopping at an indie bookstore or reading a review online.

In the last couple of years, I’ve begun to appreciate the nuances of certain forms, like sonnets. I love how writing them feels so intricate yet intimate, like solving a mathematical equation or learning another language. I’m interested in (re-)appropriation, so writing a cento would be fun for me, I’m sure.

The train! I get motion sickness while traveling by car, but not on the subway. When I visit family in Rhode Island and I take the Amtrak, it’s a three-hour ride—the perfect amount of time to read and write, or edit.

The park I live closest to is Herbert Von King, and I love walking through it. I also love Prospect Park, which is right by my partner’s apartment. I’m truthfully a bit of a homebody, so some of my favorite Brooklyn nights are spent either at my place or in my friends’ apartments.

And what I share in common with you is as ever-changing as the ocean’s tide,

For every drop of salt water in me as good and cold as the Atlantic, I recognize in you.

Brooklyn is alive, and rich with its history—even as it changes. As it becomes changed.