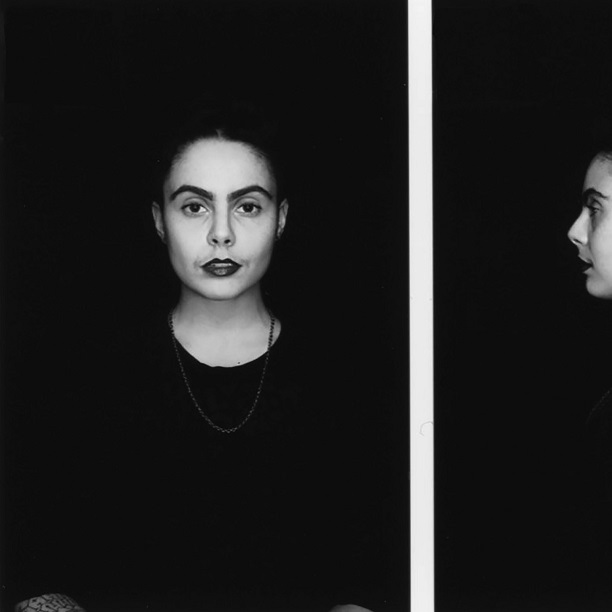 Charles Theonia is the author of the poetry collection Which One Is the Bridge (Topside Press, 2015) and coeditor of Femmescapes, a zine of queer and trans affinities with femmeness. They teach literacy skills (and encourage critical analysis of police violence and mass incarceration) at the Borough of Manhattan Community College. Please get in touch if you are building a sloth sanctuary within the city limits. “This Morning Your Horses” appears in the Brooklyn Poets Anthology, released this spring.

This Morning Your Horses

walked beneath my window,
woke me with their warm, short
gusts, breathing come with us.
What I called love was letting
the loose dirt of someone else
crumble over me. Then you
called me out the window—
it’s not something I dig into
alone anymore.

Let’s dance in the mirror
and ’90s-montage
our outfit changes.
Spinning to Mazzy Star
in your red velvet,
pleather, mesh.

Let’s get our lace wet. Come,
braid my hair, get me ready,
brush gold into my eyebrows
until they glitter with malice,
sharpen your wings before
we put our bodies
out into the streets.

Baby blue wax accretes
on the wood of my desk,
gathering itself in invisible
increments. Wanting
to meet you all the time
is a sweet allowance of myself.
Without knowing it I’d sensed
that need was dangerous.
Now, I can see it building.
You say what I am, and I
have a chance to become it.

It’s an assemblage of a dream about David Wojnarowicz’s diary coming to life as I read it and the beginning of the first relationship that made me reckon with real interdependence.

I wanted to say, “Nothing, and that’s ok!” But actually I just started planning the third issue of Femmescapes with my coeditor. It’s invigorating to sit down and reflect on all of the brilliant work by queer and trans femmes we know, love and admire, and imagine how it might fit together.

I drink a special coffee, my eyebrows are looking sharp, my cat decides to sit on me, someone’s down to cuddle for as long as I want to, I go into a green space or spend time by water, one of my friends shares their new work with me, I learn about an animal I didn’t know before (go Google “marshmallow bat”), I make something with my hands, I eat cake (or dumplings, or roti, or samosas, or …).

I was born here, and nowhere else does it for me, but it took moving across the country for me to figure that out.

I grew up in Park Slope, where the rent’s grown so high it seems like soon the streets will be made up mostly of Starbucks and Chipotles. Since moving back to Brooklyn, I’ve lived in Flatbush, which feels like home to me.

Recently, getting involved with Equality for Flatbush has made me more aware of the actual workings of gentrification on the individual and city levels. I’m hearing about ICE coming into bars and stopping dollar vans, or landlords calling child services to try and get their tenants evicted so they can turn over the apartments. So that’s how I’ve been changing, in terms of what I see, but there are also fancy condos going up all over and expensive pizza places where all the servers are black and all the customers are white. Please support E4F if you can! They’re doing great work on the intersections of police violence and gentrification in Flatbush.

A sweetheart told me about an undercover cop car that was playing the ice cream song. Biking down the street, they thought they were being followed by chocolate-dipped vanilla cones, until they looked over their shoulder.

It means being fed and challenged by each other’s work and being able to see each other growing. It’s all relational for me, so it happens less geographically and more interpersonally.

No matter how many times I hear Tommy Pico read, it will never be enough. My roommate Paco Salas Pérez is a weird and wonderful Brooklyn poet, linguist and amateur practitioner of mouse husbandry. Angel Nafis, Morgan Parker and Wo Chan are all beautiful, funny, opening and cutting.

I’m grateful all the time to Paul Jenkins for getting me to make poems that are more about feeling something communicable and less about being clever. He made a caring, intergenerational space for me, even when he was unfamiliar with what I was getting into as a young trans shyfreak.

Cat Fitzpatrick is a forceful and tireless editor (one time she made me show her a draft of a poem I had in a notebook, scolded me for not telling her about it sooner, made me type it up, added it right into the manuscript we were working on, and then wrote literary criticism about it). She’s really shifted the way I think about how I want my poems to be in the world. That is, she made me feel like maybe it would be OK for them to go out in public.

Ross Gay’s Catalog of Unabashed Gratitude, for the way he holds loss and pleasure together in both hands.

Nalo Hopkinson has been the first entry on my reading list for years! Maybe now that I’ve typed that out, I’ll go get ahold of one of her books …

I like the concept of skimming from book to book and back, but I’d say I read most thoroughly when I take them one at a time. I like physical books, and I think I’ve gotten a handle on marginalia that won’t embarrass me later on when someone asks to borrow.

I want to try a series of poems with some kind of plot and character. I love The Gooey, the poem-y novel that Oki Sogumi is writing, and the episodic, second-person, perspective-jumping structure of Claudia Rankine’s Citizen is very appealing to me.

I mostly write at home and read on the subway. Good things happen when I go to the library, which I would like to do more often.

Prospect Park, Green-Wood Cemetery and the Botanic Garden are some of the spaces where I have the most densely overlapping experiences throughout time, especially because there were so few places I could be alone as a teenager. So when I’m in particular parts of them, I get to experience a non-linear self.

I celebrate monstera leaves you brought to bed,
And what I see through their green holes is you who has stayed
the night,
For every time you come home to me as good as I come home
to you.

Because the city hasn’t eaten it all yet.