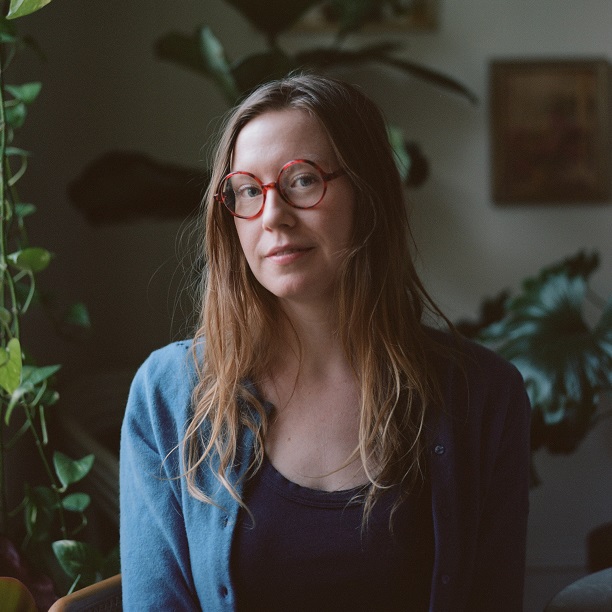 Chessy Normile is the author of Great Exodus, Great Wall, Great Party, selected by Li-Young Lee for the 2020 APR/Honickman First Book Prize. She received a BA from Sarah Lawrence College and an MFA from the Michener Center for Writers where she was awarded an Academy of American Poets University Prize. Her poems appear in jubilat, Academy of American Poets, Narrative, American Poetry Review, the Journal and elsewhere. She lives in New York where she edits a zine series called Girl Blood Info.

I wrote a joke on the bathroom mirror in toothpaste.

It was about how there were four combs on the sink,

which I think is a remarkably high number of combs.

Who were you brushing?? I wrote

and drew a fictional animal with long hair.

My roommates came home and it was like christmas for me,

very proud of myself, lying in wait under the covers, listening.

I heard the mean one, Simon, tell his girlfriend,

There’s a snide note in there

about too much hair in the sink,

which was an incorrect reading of my joke.

This caused in me a panic so acute I fainted.

Luckily I was in bed already,

so this was not so different from falling asleep,

except for one potentially noteworthy difference,

which was I dreamt all night

were swimming through dark, thick water

towards my sleeping body.

I couldn’t move because my body was asleep and

I couldn’t hide because my body was glowing,

I could not turn

the damned light off!

The water glowed ’round me where I touched it.

Because of the glowing

I saw it was red,

thought, maybe this is not water …

thought, THIS IS BLOOD I AM SWIMMING IN,

the time I drove to Washington, DC

with a girl named Carly who liked to lucid dream

and that that shaman told her,

In a nightmare, Carly, if you are being chased,

turn around and walk right back towards the thing that is chasing you.

Only one of three things can happen: it will disappear,

it will change into something else, or you will wake up.

When I woke up

I was staring in the mirror,

through the toothpaste message.

Who were you brushing?? the mirror asked.

I reached out and began to smudge brushing??

until all it said was Who were you

It looks like I wrote down some true things that happened and then started to wonder why being misunderstood gave me a feeling of physical terror. Maybe the poem tries to answer that. This wasn’t necessarily clear to me while I wrote it, I just see that stuff when I read it now. An artist named Jordin Isip has had his illustration students at Pratt illustrate this poem and another one I wrote for four or five years now and I learn A LOT from those drawings, they’re amazing. One of my favorite illustrations of “Misunderstood” was done by Joanne Lee. Can I include it here? 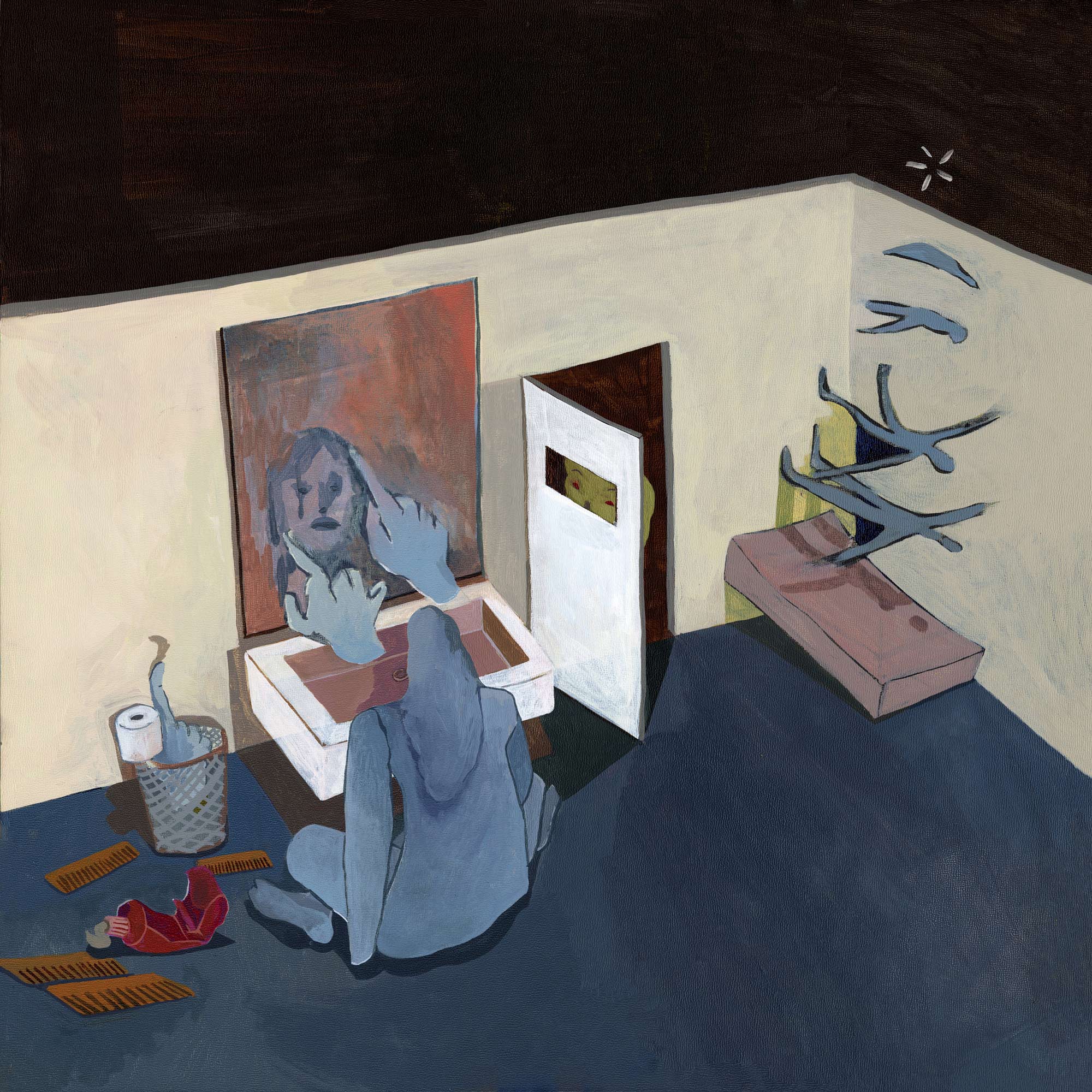 I’m reading about hermits and reading the poems and things they wrote. In my mind I call this subject “hermitude.” I’m also trying to write a poem for Annelyse Gelman’s project Midst. And I’m writing poems just in the regular way.

I have a cup of coffee, open the window by the couch, write a poem, eat cereal, read, write in my journal, maybe I’ll take a bath next, I don’t know, I’m describing today so far. Currently, I’m answering these questions. It’s Saturday, I’m alone, it’s pretty cool.

I grew up in Westchester and then went to college there, too. Love Westchester, can’t get enough. Except I really can, so I moved to Brooklyn in 2011 before I was done with college and commuted from there. After graduating, I moved to the Bronx then back to Brooklyn for a few years before eventually moving to Texas for grad school. Now I’m in Queens! I’m on a tour of NY, lol.

Well, truth be told, I live in Queens right now, but not so far from Brooklyn. I’m in Ridgewood right on Fresh Pond Road—is that too much information? I won’t say which restaurant I live above. But here is a hint: they play their music loud, exploring each genre. I think the best thing about this living situation is how many grocery stores are on this street—Fresh Pond Farm Market, Valentino’s … *chef’s kiss*. I’ve never lived in Queens before, but I really like it. My dad’s from Flushing.

I moved to an apartment in Greenpoint eight years ago, where I lived in the living room. I set up a kind of makeshift wall with a combination of cardboard, a bookshelf and my aunt’s wooden—what do you call those?—a folding wooden thing that divides rooms and has a landscape painted on it. I lived there for three and a half years and when I moved out my sister moved into my room. I just helped her pack that room up last week because she’s moving to Jersey for school and we did the math and almost twenty people have lived in that apartment over the past eight years.

It means everything to me! And I remember when it began. I met Christianne Karefa-Johnson when we were both eighteen and freshmen in Jeffrey McDaniel’s poetry class at Sarah Lawrence College. Her poems were incredible and we started writing back and forth just this one long poem where we’d continue each other’s lines or respond to the images or some of the words the other one wrote. I think we kept that up the whole way through college. You can listen to her music and hear how incredible her poems are; she’s called DoNormaal. But yeah, from there it really became this ever-expanding thing where I found so much joy and inspiration in meeting people who are writing and reading poems—there are so many of these people and I want to name them all!! But I’ll just name a few books by poets I love that I SUPER recommend right now for the sake of BREVITY: Maiden by travis tate, Vantage by Taneum Bambrick, The Holy Bible: Vol. 1 by Eleanor Eli Moss and a book that isn’t out yet but will be in April 2021 called Town Crier by Sarah Matthes. You will love these books!! Laugh, cry, love it.

Ok! Some contemporary poets whose work I love and learn a lot from and who live in/I met in Brooklyn are Amy Lawless, Diana Hamilton, Rindon Johnson (lives elsewhere now, but I met him here) and Leah Wellbaum (lives elsewhere now, but I met her here—her lyrics are amazing poems, I recommend listening to the songs “Magnets, Pt.1” and “Magnets, Pt. 2” by her band Slothrust to hear an example). Also Walt Whitman!

I’m struggling to answer this because the answer is big—so many people! Friends, teachers, artists, musicians, other poets, I have been influenced by so many amazing people. I want to talk about the poets Jeffrey McDaniel, Naomi Shihab Nye, Jane Miller, Natalie Diaz, Lisa Olstein, Heather Christle, Michael Adams and Marie Howe, but what would I say?? Maybe I will just say one thing I learned from one of these people: when I’m with Marie it’s like “I’m here. You’re here. Here we are.” To be actually present like that, to be shown how to be present like that, it’s been an incredible gift.

The Body’s Question by Tracy K. Smith. It was a book that reminded me how sometimes, the poems I feel in my heart and all that, the urgent things I can’t find the right words for—they’ve already been written! And I get to read them and just be astonished. I often feel that when I read Carl Phillips’s poems, too. It’s really specific—it’s not just loving a poem, it’s feeling like the thing you couldn’t figure out how to say has been said already, exactly right. One time I was trying to write a poem for weeks and it was so frustrating until I realized I was just trying to write Marie Howe’s poem “Part of Eve’s Discussion” and it was such a relief. I just read her poem then and thought “exactly.”

I don’t know! I’d like to finish reading the Bible someday.

Describe your reading process. Do you read one book at a time, cover to cover, or dip in and out of multiple books?

Mostly I read one book at a time. A lot of people in my life read lots of books at once. I think it’s a sexy, voracious way to be. But I am distractible. I stopped 350 pages into Barbara Tuchman’s A Distant Mirror even though I loved it just because I let myself pick up a different book and now I don’t know if I’ll ever find out how the fourteenth century ended.

Do you plan out your reading in advance or discover your next read at random?

Both. I have a list of hermitude books I want to read, but that’s unusual for me. Mostly I look at the shelf and just pull something down and read it. With poetry, I’ll read the book all at once whenever I can. That’s my favorite way and it’s possible most of the time, but it wasn’t possible most recently with John Ashbery’s Self-Portrait in a Convex Mirror, which I found really hard, but ultimately great, and Thomas Merton’s Cables to the Ace, which I am not sure I loved in the end.

Do you prefer physical books or digital texts?

Are you a note-taker?

Yeah, but luckily not like I used to be. You can hardly read some of my old books for how much shit I wrote in there. My copy of The Odyssey from the ninth grade says “No way!” and “You’re so selfish!!” and “OMG” all over the margins.

I want to write more formal poetry. It’s kind of mind-blowing to read “One Art” and be like that’s a villanelle?!

I read and write all over the place. It’s a lucky thing because it makes my life flexible. I write on the train, sidewalk, in bed, on the couch, wherever. I don’t read or write in the car, though, because that would make me throw up.

Wow, I miss spaces! I miss seeing my friends’ bands play and going to restaurants and coffee shops and bars and into other people’s apartments. At this point, I love every single space—the hardware store, the DMV, the laundromat.

I celebrate my lunch,

And what I consume you shall consume,

For every bun belonging to me as good belongs to you.

That’s a poem about making someone else lunch.

I don’t know! But so many of the people I love are here.