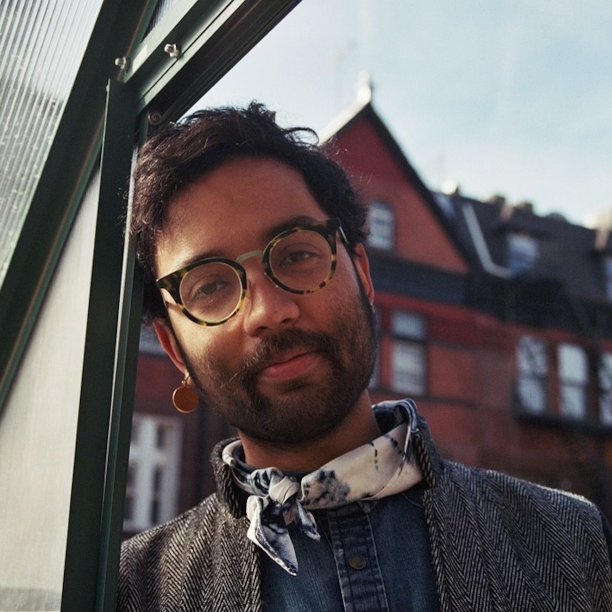 danilo machado (he/they) is a poet, curator and critic living on occupied land who is interested in language’s potential for revealing tenderness, erasure and relationships to power. They are the author of the chaplet wavy in its heat (Ghost City Press, 2022) and the Post Post Post newsletter on Substack. Their writing has been featured in Hyperallergic, Poem-a-Day, the Recluse, GenderFail, ArtCritical, Art Papers, Long River Review, TAYO Literary Magazine and No, Dear, among others. A 2020–21 Poetry Project Emerge–Surface–Be Fellow, danilo is a co-founder and co-curator of the reading series Maracuyá Peach, the chapbook/broadside fundraiser Already Felt: Poems in Revolt & Bounty and co-host of the exquisites reading series. danilo is producer of public programs at the Brooklyn Museum and curator of the exhibitions Otherwise Obscured: Erasure in Body and Text (Franklin Street Works, 2019), support structures (Virtual/8th Floor Gallery, 2020) and We turn (EFA Project Space, 2021). They are working to show up with care for their communities. More @queershoulders on Twitter / IG.

what color’s the river today?

after a text from lee

these days, wind feels like safety in the way

so they miss you—you think about this on

the east river ferry you frequent to

stationary apartments and docks of

sometimes-moving cargo or cardboard or

light flickers or oars and on the edges,

enough to show how high its recent rise

This is a poem from my chaplet wavy in its heat, just published by Ghost City Press as part of their Summer Series. The chaplet is made up of ten 10x10s—ten-line poems where each line contains ten syllables—a form I started writing at some point last year after not really wanting to commit to sonnets.

I was recently curatorial assistant at Socrates Sculpture Park and would commute using the New York City Ferry from Pier 11 to Astoria. For $2.75, I would ride along the river, stopping in Manhattan, Brooklyn and then in Queens—the whole time in unironic awe of the city I feel grateful to live and work in. During one of those rides, my friend Lee asked about the water’s color, which sparked a series of poems with this title (you can read another one in the chaplet).

In our ongoing pandemic, air particles and their distribution make the difference between getting infected and not—something I am keenly aware of in every space I occupy. The top-deck wind of the ferry felt like the safest part of my commute, as the roof of my old apartment felt like the safest place to see others earlier in the pandemic.

The poem asks recurring questions many of my poems do, including: what does it mean to move from one place to another? What passes by in the space between departure and arrival? What’s clearer in motion? What are signs of climate catastrophe and gentrification surrounding us, and how do they blur?

I’m currently working on a chapbook project titled This is your receipt and is not a ticket for travel with my friend Jason Lipeles of Faint Line Press. It will be out in March of next year and it represents almost ten years of transit poems about riding buses, subways and trains. I’m really excited about it.

With my friend Em Marie Kohl, I co-host a reading series called exquisites, held first Thursdays at Art Café + Bar in Brooklyn. The poets (all queer, of course) are curated collectively, inspired by the game exquisite corpse and the old use of “exquisite” meaning “dandy.” Each reading, we raise funds for a mutual aid effort or organization chosen by the poet, most recently GLITS Inc., Bailfront and SWOP-NYC.

A good day starts with a slow morning either making coffee or going to meet a friend for it. The best afternoons always include a long nap and either another coffee or wine following the clarity one has afterward. Good days include a little writing, a breeze, flipping vinyl, placing a postcard in the mail and seeing some sort of art.

A museum education fellowship at Brooklyn Museum (where I’m currently producer of public programs) brought me to Brooklyn. I grew up taking the train into the city to see art, so I’m sure if it wasn’t that fellowship, something else would have brought me.

Tell us about your neighborhood. How long have you lived there? What do you like about it? How is it changing? How does it compare to other neighborhoods or places you’ve lived

I’ve lived in Crown Heights since I’ve lived in Brooklyn, about six years. I love that it’s a deep place of community for Caribbean and Jewish diasporas simultaneously. I love the green spaces, especially along Eastern Parkway. Every time I pass a “WORK IN PROGRESS: RESIDENTIAL” site, I am reminded of how it is changing.

Recently, a friend was in town and we walked to the crossroads at Grand Army Plaza. Something about standing under that archway, looking at the library’s tall golden facade and the park’s entrance felt definitively Brooklyn. The Saturday farmers market there feels very Brooklyn, as does the experience of finding (or, if you’re like me, trying to find) a friend at Prospect Park.

For me, making poems is inseparable from making community. I’m grateful to have found many kinds of poetry community in Brooklyn, with an early formative experience being Marwa Helal’s Brooklyn Poets workshop Poetics of I-mage—I remain connected both to my classmates and the poems I wrote in it. I’ve also found and built community through collaborating on reading series, including Maracuyá Peach with viento izquierdo ugaz and then Devyn Mañibo, the chapbook Already Felt: Poems in Revolt & Bounty with Alexis Aceves Garcia and Devyn Mañibo, and recently exquisites with Em Marie Kohl. Last year, I was an Emerge–Surface–Be Fellow at the Poetry Project and found a lot of community there as well.

Marwa Helal is the Greatest of All Time and has been without competition the most important Brooklyn poet to me.

Other poets whom I’m just inspired by anytime I get to witness both their work and how they move through the world are Pamela Sneed, Nicole Sealey, Shira Erlichman, Cea, t’ai freedom ford and Mahogany L. Browne.

I’ve always been drawn to visual artists who consider language and text as closely as poets do. A few of my favorites whom I’ve been lucky to collaborate with (through poems!) are Jesse Chun, Levani and Bix Archer (who painted the cover for wavy in its heat).

These lists are as non-exhaustive as these poets are grounding and energizing.

My first poetry mentor was my tenth-grade English teacher Ms. Ginsburg, who turned me into a poet. Since then, my mentors have included Pamela Allen Brown, viento izquierdo ugaz, Ariel Goldberg and Marwa Helal. All have been encouraging readers and friends, and I continue to learn so much about craft, multi-disciplinary practice and community-building from each of them. I strongly believe in peer mentorship as well, and creating new mentorship models that are more non-hierarchical and outside of institutions.

I was so struck by Solmaz Sharif’s most recent, Customs, and inspired by the ways Solmaz writes against English and Empire. I also recently read t’ai freedom ford’s & more black and will be thinking about the way she activates form and ekphrasis for a long time.

I think I just want to read more from the writers I’ve already read, and maybe tackle more of the anthologies on my shelf!

It varies. I usually dip in and out of a collection, but I’m always trying to read whole collections straight through to keep learning about how poets compile a body of work. I go back and forth between planning my next read and stumbling upon it. I don’t really read digital books and will usually underline parts of poems, but only with pencil.

I’ve been thinking about the possibility of my next project being a book-length poem. When I started writing, I was very invested in compression and brevity, but as I’ve developed that’s felt less of a priority. I’m really inspired by Tommy Pico and Ted Rees, and how they sustain energy in a long work.

The subway is one of my favorite places to read and write (this was especially true before the pandemic). When I can, I love writing in front of art.

Brower Park is basically my front yard, and I love going multiple times a day with my dog. There is always so much happening simultaneously, it’s such a wonder. I love walking down Eastern Parkway and sitting on the benches among the trees, or wandering the Botanic Garden. I love the hummus at Sahadi’s, the sangria at La Ñapa and the pies at Brooklyn Pizza Crew. I love the readings put on by Big Words, Etc., Supa Dupa Fresh, and recently I was invited to read as part of Everybody Press’s Hot Poets series at Leroy’s Place and it was a blast. I am grateful to be part of a team that creates magic at the museum through public programs, and it’s so meaningful to see community welcomed intentionally and invited to be in conversation with artwork, to dance, and of course to listen to and read poems. I’ve loved listening to poems at Bar Etc., Art Café + Bar and recently, Brooklyn Poets’ new space!

I celebrate all of us

And what I witness as acts of care in you I hope you see in me, hope

For every everyone that holds me as good as they do, they also hold you.

It keeps unfolding, it keeps remembering.