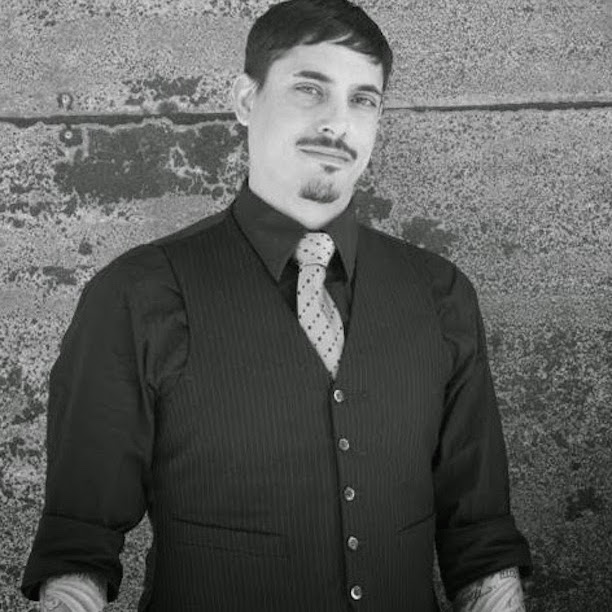 David Tomas Martinez’s work has been published or is forthcoming in Poetry, Ploughshares and Oxford American, among many other journals, and he has been featured or written about in Poets & Writers, Publishers Weekly, NPR’s All Things Considered and other venues. Martinez received his MFA from San Diego State University and is currently a PhD candidate in poetry at the University of Houston, where he is the reviews and tnterviews editor for Gulf Coast. A Bread Loaf and CantoMundo Fellow, his debut collection of poetry, Hustle (Sarabande Books, 2014), won the New England Book Festival’s prize in poetry as well as honorable mention for the Alfredo Cisneros Del Moral Award.

Sometimes I count the animals I’m not,
catalogue the ways I’m not covered in spots

or will never struggle up heated bark
to branches extended over yellowed grass.

It’s nice to add up the ways my antlers
will never itch, my pouch won’t carry a joey,

won’t feast on parasites off a shark’s skin, nor will I
be pushed out of a tree and expected to fly,

why would I ever make a nest in the walls
of someone’s home: In which I discover

in scraps of pillow fillings and bits of paper
that the Amazon will wither away in a decade.

I discover, turtles live on every continent except
Antarctica, in any climate they can lock shells

and mate. I discover unicorns shall come down,
and the bullock with their bulls; and their land

shall be soaked with blood, and their dust made fat
with fatness. The throne of Denmark is made from

a kind of myth made in this monkey shack
of skin, where the price of sophistication

is to roll over and expose the tender
underbelly of learning how to play dead.

This poem responds to a common poetic trope, the romanticizing of nature. I was raised on traditional poetics, writing strictly in blank verse for two years. I only read poems by dead white men from the 1800’s whose poetry conveyed experiences vastly different from my own. I don’t know shit about birds or plants. Don’t even ask me about the moon. Not a lot of carjackings in these ideal scenes. But as Bertolt Brecht says, “You can’t write poems about trees when the woods are full of policemen.”

In my poem “On Palomar Mountain,” I write “There is no path in the woods for a boy in the city.”

While Hustle deals obliquely with nature, interweaving natural references into a heavily urban-themed book, I wanted to experiment with the poetic trope of nature, creating a poem where I transformed myself into many different kinds of animals, delineating the negative aspects of their existence from my perspective while undercutting the idea of nature poems by employing a more cynical tone from the urbanite. This had an added bonus of demystifying Romantic poetry’s glorification of nature. By engaging in the grand conversation and a personal conversation, I was literally killing two birds with one stone.

Also, I like to use enumeration in my poems (spoiler alert for my favorite Brooklyn poet). And for all us braggadocios folks, what is bragging but just a list, no? “Small Discoveries” is an enumeration of my humanity. For many people of color, it seems that there is a constant attack on our humanity from society. Expressions of beauty, ideas of the expression of intelligence, the assumptions about my personhood, to the brown and black that are murdered in the street every day by institutions that should be protecting their rights—all of this is a fact of life for people of color in this country. For women in this country. For all groups out of the dominant perspective. So by showing how I am not an animal, I affirm my humanity in this poem. Then, in the middle of the poem a shift occurs, a set of small discoveries that is not really knowledge but a transcendence from trying to survive to “sucking the marrow from life.” Isn’t this what we all want?

Fun fact about this poem: One of my favorite lines is “a kind of myth made in this monkey shack / of skin,” which was inspired by a conversation I had with some friends and Tony Hoagland about a woman who’d written a poem with a description of caged monkeys. All of us were appalled, not by the poem, but by the truth of it. Tony challenged all of us to write a poem that used the word monkey shack. I was currently in the final editing process of writing “Small Discoveries” when this phrase jumped into my mind and led me to the poem’s eventual end, which subsequently conveys how our existence and growth is based on appalling conditions, emphasis on “conditions,” in the many senses.

I am working on my second book of poetry, which will be published by Sarabande Books upon completion. I’m about halfway done and very excited about it. I will read from the new manuscript at my Brooklyn Poets reading. I am also working on a memoir. Like Hustle, my memoir deals with masculinity, fatherhood in this instance. I am excited about working on it, but also scared because of the topic. I have to write about difficult topics. I am also working on getting a job. If anybody reading this wants to give me an academic job in NYC, talk to my people (email me).

Not unlike Ice Cube, a breakfast made with no hog. I prefer a light breakfast of a motley of fruit, topped with thuggish yogurt and granola. The breakfast of a true revolutionist. Then I write while drinking Yerba Mate and listening to Miles Davis’s Kind of Blue on repeat for four hours. Then I go work out, cook a really good meal for my friends and end the day with dirty sex with the woman I deeply love, all while doing it sober. Perfect day.

I have lived in Brooklyn for almost six months. I did some jumping around but stayed in Clinton Hill. My favorite part of living here is the coupling of living in an old, historic neighborhood with the vibrance of the people. There is also some good eating in Clinton Hill.

Share with us a defining Brooklyn experience, good, bad or in between:

After boarding the plane to New York, I was struggling to put my carry-on in the overhead storage, shimmying and pushing, when a voice rang out through the chilled air of the plane. It pierced my heart. It questioned if my bag would fit. I turned around to say, “Bitch, I know what I’m doing,” but instead said, “Ya think?” It was the poet Amy King. I recognized her because I am a supporter of the VIDA cause. She didn’t recognize me. So I asked if she was a writer. She responded yes. I asked if she was a poet. Again she said yes. When I admitted to recognizing her, she seemed conflicted, so I bashfully lowered my eyes and boastfully said, “I am a poet too.” We became fast friends as we talked the whole plane ride. Then I took a cab that was like flying on a roller coaster, and after I put my luggage in the house, I took a walk and bumped into the fiction writer and my fiendishly wonderful friend, Tiphanie Yanique. She quickly reprimanded me for ruining the neighborhood, as she lived only a block away. We cut it up before the duties of motherhood whisked her away. The leaves fluttered as she left. Later that evening, I met my main dude, Eduardo C. Corral for a meal and too many adult-laced club sodas. It was great to see Eduardo, as I hadn’t seen him for some time. This was my first day in Brooklyn. I knew this was the place for me.

Whitman. Not. Even. Close. Though I do love going to hear some wonderful poets, I had Whitman so early in my career that there is a complete emotional advantage for dear old Uncle Walt.

Haven’t caught Hustle in any of them yet, so none. First to get it, gets the title. Gauntlet has been dropped like a mic from a gangster rapper’s hand, who will go quietly to his home and meditate and stretch before bed. Honestly, though, I haven’t lived here long enough to make an informed decision, and I am not going to say Barnes and Noble.

For real for real, the gym is the only place I read outside the house, and that’s really just listening to downloaded poems or lectures. I would read on the subway but I am too busy people-watching. I love to people-watch.

I like to go to Roman’s and eat. I like healthy, well-prepared food. If you suggest a good restaurant to me, we are friends for life. Don’t even ask what I did to the last guy who steered me wrong.

The Art of Syntax. Now it’s not a page-turner but has really nuanced my thinking about word order’s effect on the delivery of meaning. I find that beautiful.

Rob-
in-sin. (He said this through clenched lips.)
Thought Jackie was like all the other blacks in the pen.
That black love was all hair grease and no peace.

It is my curse
that I moved to Brooklyn, quote Biggie.

I visited New York in June when I read at Bryant Park. It changed everything. Also, I am on a plane to AWP typing these answers and will probably meet fewer writers than when I go to a coffee shop in Brooklyn that serves gluten-free anythings.