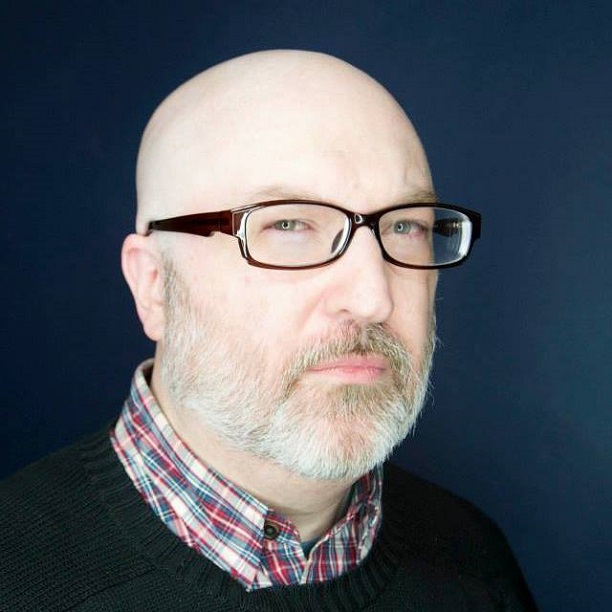 Gregory Crosby is the author of Walking Away From Explosions in Slow Motion (The Operating System, 2018), as well as the chapbooks Spooky Action at a Distance (The Operating System, 2014) and The Book of Thirteen (Yes Poetry Press, 2016). For more than a decade he worked as an art critic, columnist and cultural commentator in Las Vegas, where he served as a poetry consultant for the Cultural Affairs Division and was instrumental in the creation of the Poets Bridge public art project. He was awarded a Nevada Arts Council Fellowship in Literary Arts and holds an MFA in creative writing from the City College of New York, where he won the 2006 Marie Ponsot Poetry Prize. He is an adjunct associate professor at the John Jay College of Criminal Justice and teaches creative writing at Lehman College–CUNY. On Sunday, July 28, Crosby will read for the Brooklyn Poets Reading Series at the NYC Poetry Festival on Governors Island with Asiya Wadud and Jericho Brown.

Walking Away From Explosions in Slow Motion

It’s all you can do. The world is always

behind you, the catastrophe of time,

the exchange of air & fire, the wave

of force raising the hair on the back of

your neck, a rivulet of sweat unseen

by all the eyes on your unseeing gaze,

the blank face that says I’m walking away,

I’m getting away with something: all those

opportunities to find your body

framed by boiling galaxies of flame,

untouched by shrapnel, not above it all

but out in front of it, like the future

itself, walking away. Fucking badass.

A cinder in your eye might ruin the shot.

—From Walking Away From Explosions in Slow Motion, The Operating System, 2018.

The Internet is undecided as to when, precisely, the familiar cinematic trope of someone coolly (or grimly) walking away, in slow motion, from a massive explosion behind them first occurred. My own guess would be sometime in the early 1970s, right around the time our civilization began its inexorable decline. Anyway, that’s all this poem is, along with a nod to Lot’s wife, who has no name in the so-called Old Testament, but should. I always think of her as Lotta. Lotta and Lot, right? They met cute, got married, and then saw their home destroyed by a force beyond their comprehension, and to add insult to injury, Lotta looked back at the only home she’d ever known and the Lord turned her into a pillar of salt thousands of years before the invention of the margarita, so it really was a lose-lose situation all around. Sam Peckinpah showed lots of bullets hitting bodies in slow motion in The Wild Bunch (1969), but I haven’t yet looked back at that film to see if there’s any walking away from explosions. It was all so long ago.

A case of scotch! Ha, no, not really. Unless they’ve started making scotch out of middle-aged ennui, climate change–related depression and a stalled novel, which is entirely possible, as this is Brooklyn. The next manuscript is actually finished, and it’s entitled Captain Silence & the Darkest Timeline, and we’re hoping for a big box office opening weekend so we can begin the sequel, Captain Silence vs. the Algorithm.

Walking my little dog, Richie Chihuahuaham, first thing in the morning down to Bush Terminal Park and sitting on a bench while staring across the myriad harbor at the Statue of Liberty and muttering, “You really did it, didn’t you … you blew it all to hell.” After that, how well the day goes all depends on how much writing I can get away with before I feel justified to take a break and go play.

True love. Also, a desire to live on an island off the coast of America.

Sunset Park! Three glorious years! Everything, except for that time someone fished a bill out of a mailbox and hit me with check fraud! As to changes, it’s probably more on the cusp of gentrification than I care for, even though I really do like the look of those Edison lightbulbs (sorry). It’s also the first neighborhood, having lived in five other parts of the city, that truly feels like my neighborhood, but that might largely flow from the fact that I live next door to my favorite café (Slimak) and that I have a small dog. Nothing grounds you in a neighborhood like walking a dog.

I once officiated a wedding while on the Wonder Wheel at Coney Island. Also, does never wanting to go to Bushwick for a reading count as a defining Brooklyn experience? Seriously, there’s nothing wrong with Bushwick, but if you tell me your reading is there, I likely won’t show up. What is up with that?

I always hear my friend Dave Hickey in my head: “Whenever I hear the word ‘community,’ I know someone is about to be excluded.” I prefer the phrase “society of elective affinities,” but I guess that’s too many syllables. In truth, after the dim distant days of friends made during my MFA, the only poetry community I’ve found that isn’t completely irritating is Brooklyn Poets. This is said in all sincerity; I am not sucking up. Of course, people who say they’re not sucking up are usually sucking up, but I am utterly sincere when I say I’m not sucking up, and that I truly love and appreciate what Jason Koo has created with Brooklyn Poets, and the (ugh) community that has grown around it.

The most important Brooklyn poet is Abigail Welhouse. There are obviously others, but Abigail is the supremely important one. You should go to McNally Jackson and buy her chapbook. SHE IS SO VERY IMPORTANT.

I had the good fortune to study with Elaine Equi (who reinforced the notion that one can write a poem about absolutely anything), Marilyn Hacker (who put me on the righteous path of the sonnet, which is still my default form when I sit down to write) and Wayne Koestenbaum (whose critiques were unerring in identifying a poem’s strengths and weaknesses, though one time he said you couldn’t use a word like blood in a poem, and now every time I use blood in a poem I think, That’ll show him).

A.R. Ammons’s Garbage (1993). The kids aren’t likely reading Ammons, are they? Oh well. They should, along with all the other poets I read that no one under forty reads. Go pick up a copy of Garbage and read parts eight and nine.

I read one book at a time until I reach a place of boredom or fatigue and then switch to another. I’m usually reading four or five books at once, in different genres. I plan my reading in advance and then watch as my carefully laid plans meet the reality of whatever new and shiny text has captured my attention. I prefer physical books because SCIENCE HAS NOW PROVED that screens lead to skimming. I am an occasional note-taker, but always in a separate notebook. I never, EVER, write in books. I know most of you reading this do so, but every time you write in a book you shorten the life of that book, and when we’re all wandering the wastes like Burgess Meredith and his broken glasses, it would be good if as many books as possible have survived intact, without being dog-eared (a special level of hell is now open for people who dog-ear pages) or their spines cracked or someone’s dumbass marginalia (“possible symbol of death ?????”) cluttering up the text.

Putting a hat on an empty table; leaving it there, untouched, for an hour; lifting that hat at the end of that hour to reveal a solid block of ice.

Any café that is clean and well lighted.

Sunset Park, Café Slimak, Zona Sur, the Brooklyn Botanic Garden (esp. the Japanese gardens), the Hollow Nickel, the Nethermead in Prospect Park, the cinemas at BAM, Tasty Pastry in Dyker Heights, Coney Island, Brooklyn Bridge Park, the Housing Works in Park Slope, Joe and Wendy’s apartment, Berl’s Poetry, and that Trader Joe’s right by the DeKalb stop where you can get groceries and then exit and immediately get on the R train—what a blessing.

He just wanted to be a big shot, my father;

I spent childhood as an artful dodger,

though of the arts, my parents knew jack.

What I could not steal, I knew I must rob;

fortunately, I don’t believe in sin.

So I joined the Shakespeare Squadron, & pen

in hand I wrote my way into some kind of love,

washed up but not shipwrecked in old Brooklyn,

a Kings County king in my own skull (no biggie).

The cheap cost of living (by “living,” naturally, I mean “avoiding soul-death”).