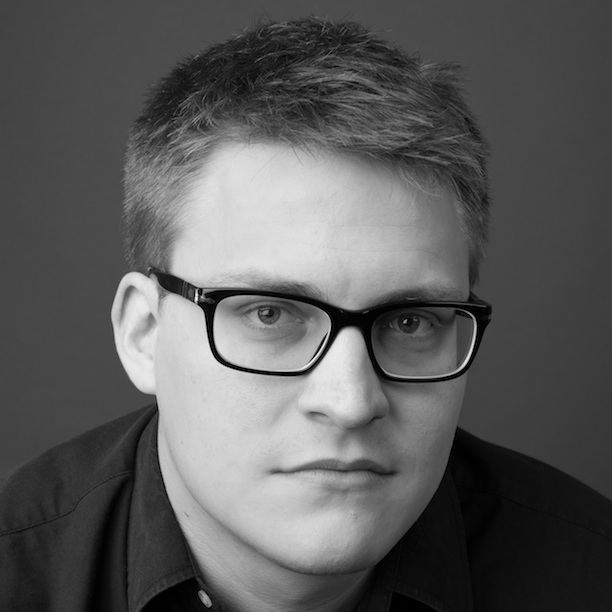 J. Scott Brownlee is a Writers in the Public Schools Fellow at NYU. His poems appear in The Kenyon Review, Hayden’s Ferry Review, RATTLE, Beloit Poetry Journal, Ninth Letter, BOXCAR Poetry Review, The Greensboro Review, Borderlands: Texas Poetry Review, and elsewhere. Originally from Llano, Texas (population 3,033), he writes about the people and landscape of rural Texas and is a founding member of The Localists, a literary collective that emphasizes place-based writing of personal witness, cultural memory, and the aesthetically marginalized working class, both in the United States and abroad. Disappearing Town, his first book-length manuscript, was a finalist for the 2013 Crab Orchard Series in Poetry First Book Award, and his chapbook, Highway or Belief, won the 2013 Button Poetry Prize.

Let the division of light be the barbed-wire fence line.
Let it divide up everything. Let it determine where
the boundaries of the day and the first darkness are.

Let the beef cattle enter and exit the pasture
as they each see fit, licking piles of salt from the round,
rubber basins the hired hands fill for their thick tongues

to lick. Let what the deer eat in the long drought be enough.
Let the landscape contain itself. Here where the sun
going gradually down leaves me singing the songs

German forefathers sang, ranchers taming the land,
let me return to the basics of living off it every day.
For over eighteen years I thought I would never grieve,

leaving here. Now, it’s the deer calling me back
with their white tails, faint flicks in the darkness again
between my snake chaps and the bee brush, the mesquite

scrub and the needled cactus spines. Daylight
devours itself—feasting on its own prickly-pear flesh.
As I pass through the pasture on my way to the highway,

I see a buck. In my high-powered scope, in the crux
of its cross-hairs where the deer marks a vanishing point,
there’s an infinite place I can never quite reach:

an erasure fills it. Both the buck and myself will disappear,
and I understand this. But until then, my body joins
the buck’s. For a second, we’re linked

by the bullet fired through twilight between us.
Its hot cone breaks his skin—enters in where
it enters my skin. Shared friction burns

at its vanishing point, where a great peace fills me—
and an emptiness, him. Christ got up on a cross
to prove he meant business. My own father took me

hunting several times, though I never liked it.
Now, I’m doing it simply because I miss him.
This one ritual kill is ours. Tonight we can say anything.

Distance passes through us like light thrown down
from stars. We are drawn near by it—so close
the bullet I shoot at the sky, streaking up, touches him.

“Hill Country Elegy” is an older piece I wrote at the beginning of putting together Disappearing Town, my first book-length manuscript, back in 2011. I came up with the engine for it (i.e., “Let ____. Let ____.”) by drawing upon my own background as a formerly religious person. The language of evangelical Christianity (I am an un-born-again Baptist) has always been extremely beautiful to me, even after my own belief waned and subsequently vanished. I love the idea of the poet as preacher-at-a-pulpit. More importantly, though, I love the power language has to transmit a variety of messages when taken out of its original context and used as part of a poet’s linguistic toolkit. Mine definitely includes the Bible. I think it has some of the most striking language ever written—and so often use it as a poetic ignition point.

That said, “Hill Country Elegy” is a result of obsessively reading poet Mike McGriff’s work as well, which is about landscape and—most importantly—permission. From McGriff I learned that I could write about my own rural origins with concision and lyric intensity, and that it didn’t matter if the landscape and people at its emotional / aesthetic epicenter had anything to do with what is currently cool / hip / based on aesthetics that arise from economic privilege. That simple word “let” is more than an anaphoric engine to me. In this poem’s life and beyond it, “let” signals the opening of a metaphysical gateway that has helped me reckon with and write into the place I’m from rather than out of and away from it. I don’t even like to deer hunt myself (I’m not a very patient person), but my father is. He is one of the most patient people I know. It seems very logical and fitting for that patience to have worked its way into this particular poem about my father, myself, and the buck he and I hunt together within and beyond the boundaries of language.

The short answer is “a lot.” I have the opposite of writer’s block most of the time, in part because at some point in my writing life I realized other people were more interesting than I was—and that I wanted my poems to document a “we” more frequently than an “I,” especially if that “I” was confessional. I write poems in the first person, sure, but they aren’t at the heart of what I think poetry is. Disappearing Town, for example, organizes itself around the idea of a Baptist church congregation (a group rather than an individual). Its table of contents, which helps frame and emphasize this from its outset, is a Baptist church bulletin. About 80% of the poems in the collection are written in voices other than my own (either individual personas or groups of people). Though the collection feels more-or-less finished at this point, I always remain open to letting new work in if it seems to gravitate toward inclusion. So I’m writing new poems and then seeing whether or not they want to live in the book. A good example is a poem called “Hosea 4:3,” which will be published in The Kenyon Review next fall and takes the Old Testament Book of Hosea as its organizing principle. Its first sentence is “Therefore doves are holy.” And its last sentence … well, you’ll find out next fall, I guess.

I also recently finalized a chapbook called Highway or Belief, which won Button Poetry’s 2013 Exploding Pinecone Chapbook Competition. About half of the work in it is in Disappearing Town, and the other half will most likely be in G.T.T. (Gone to Texas), the second book-length manuscript I’m currently writing. If I can apply for and receive an NEA grant at some point, I plan on going back to Llano to interview residents and include their lives’ stories in my third book, Llano News, whose organizing principle will be the town’s one-and-only newspaper. In the long term, my goal is to publish a trilogy of books about Llano called the Of Place series.

A good day is when I manage to turn off my conscious mind, stay up until the sun starts to rise (when I can see a faint pink light around me in my small Carroll Gardens monastery cell of a room) and listen for a poem. I believe poems do not come from me but rather through me—that I’m a vessel, a tuning fork, for them. On a good day, I become a silence—a transparent blue ghost—through which poems pass as deer do back and forth over pasture fences. It would be amazing to fall in love, or get tenure, or win a prestigious prize, but for now a good day is one in which that fundamental listening happens.

I have lived in Brooklyn for a year and a half now. My neighborhood, Carroll Gardens, has some of the best sandwiches in the world (Court Street Grocers is a convincing example). I like that it is a walkable neighborhood, and though the moms and dads with strollers can get on my nerves from time to time, it provides a refreshing dial-down from the bustle of Manhattan, where I work, teach, and go to school at NYU. I also have a very real appreciation for living at the end of Carroll Gardens. My place is not too far away from the BQE—and beyond that, Red Hook. And I absolutely love the idea of Red Hook, as well as the folks who live there. It feels like a small town separate from and in competition with New York City. Whenever I want to reload and unwind with close friends, it tends to win that competition fairly regularly.

One of my favorite things to do is look out at the Manhattan skyline every day right before I get on the F train to head into the city from my apartment. Some days it is completely covered in fog—and on others surrounded by a net of sky about as blue as our polluted sky can be (which is still fairly blue, surprisingly). And then at night, man … the view at night is even more impressive from that subway stop, Smith and 9th—which I’ve been told is the highest subway stop in the world (it’s at least a hundred feet up in the air, if not a hundred and fifty).

Whitman—no contest. I read every one of his poems when I was twenty-three and young and hungry for poetry, and he remains crucial to me now that I, too, am a Brooklyn poet. The first time I stood at the Brooklyn Ferry railing with his poetry welded into it, I cried like a small, joyful child. Maybe that’s actually my defining Brooklyn experience …

I don’t know if I have a “favorite,” necessarily. It’s amazing that so many of them actually have legitimate poetry sections, though. I am thankful they do.

I love this little spot in my neighborhood called Le Petit Café—where the coffee is cheap, decent, and fresh—and also Court Street Grocers when I want to have a killer Reuben or that giant, three-layer turkey and bacon sandwich they make to perfection every time I have the $12 necessary in my wallet to order it. Also, have you been to Four & Twenty Blackbirds?—because you need to go there and get some pie. Immediately, if possible …

My favorite spot is Tacos El Bronco in Sunset Park. Every time I eat their enchiladas, my life is changed. I also spend quite a bit of time in Bay Ridge, where many of my writing friends live. It’s one of my favorite parts of Brooklyn specifically and New York City in general.

Three stand out: King Me by Roger Reeves, Hum by Jamaal May, and Seam by Tarfia Faizullah. I also love G. C. Waldrep by a factor of about fifteen, as well as Larry Levis, Dorianne Laux, Joseph Millar, Sharon Olds, and also, of course, my Localist brothers and sisters, who are putting in the work. You will see their poetry collections and novels living in the world soon, so be on the lookout.

I honestly feel like Brooklyn chose me (rather than the other way around)—and am looking forward to seeing what it has in store in 2014.