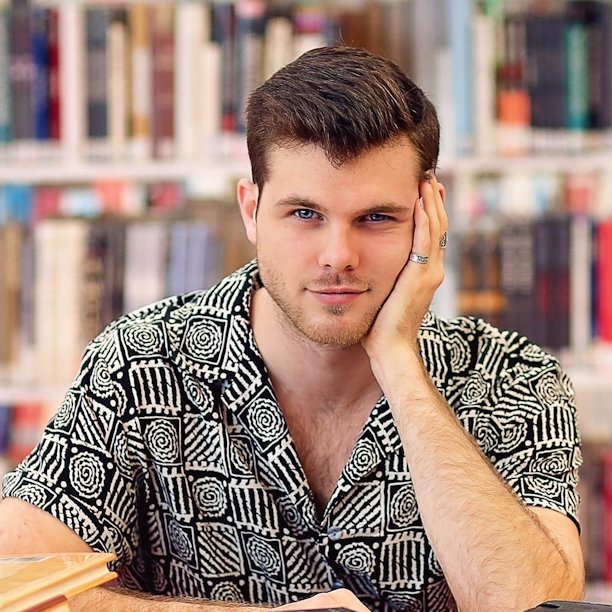 Jackson Neal (he/they) is a poet from Houston, Texas. Neal is a First Wave Scholar at the University of Wisconsin–Madison where they are pursuing a BFA in English and dance. Neal was the 2019 Houston Youth Poet Laureate and a National Youth Poet Laureate Ambassador for the Southwest. They have received awards and recognition from the Library of Congress, the National YoungArts Foundation, Button Poetry and other organizations. They are a Scorpio, Aries rising, Aries moon. This past winter, Neal was named a Brooklyn Poets Fellow for study in Natalie Eilbert’s workshop on The Epiphany.

when I was a boy, I watched

my father pull the entrails from a doe.

when I was a Boy Scout, we played a game

we made ourselves, with matches and Axe

body spray and a squirrel

someone caught in twine.

What wicked rituals can make a man

into a man, and how can I perform?

You are a mask with father’s face.

Each night I wear you in the mirror,

and each night I watch his burn mark disappear.

I learned love as willingness to burn. A father

So each night I balm my wound

imagining how I’ll hurt my son,

if I could run a skewer of daybreak through his sight

or if my violence would be subtle as a word.

the word “zuko” is a word that means “failure”

a second scar my father gave me.

I am the creature shame will make of men.

I am not a monster.

I am a boy who wants to make his father proud.

This project was a resurrection of some ancient juvenilia. For those who are unfamiliar, Zuko is a villain/antihero from the early-2000s Nickelodeon cartoon Avatar: The Last Airbender. I found the bones of this poem going through old pieces from middle school. Wattpad was such a fertile soil for many poets including me, wherein we named animation as the place of desire. I have yet to find a queer Gen Z who doesn’t have a crush on Zuko. I think for queer people, the mythology of animated worlds as places of impossibility enabled us to name and imagine what is impossible in ourselves—to love a body that looks like ours when the world tells us not to. Because this world is often unsafe for our love, our desire, we turned to other dimensions. For me, that was Avatar: The Last Airbender. Zuko, a fire bender, contains so much of the masculine rage that I thought was true to the blood of boys. But what I see shining so brilliantly in this character is not a need to destroy, but a rage that demands love. Here is a boy who lights fires with his mind, but what he wants most is someone to keep him warm—his father’s embrace, his mother’s breath. These are the aches, I think, of every young person who thought themselves unlovable.

I am working on the embodied practice of poetry. Many of us learned that poetry comes from the Greek poein, poiein, “to make, create, compose.” It is our duty then, as poets, to imagine the world we want to see and craft it through our language. But as Audre Lorde tells us, language is not enough. The work at hand is always to transform “silence into language into action.” I am working on working: marching, protesting, learning, contacting representatives, prison relief. I am trying to put all of my expendable energy into de-establishing the white supremacist regime, or rather, doing my part to make the new world.

Usually the day is not good. I feel calmer at night. A day is good when night comes sooner.

Where’s home for you? How long have you lived there? What do you like about it? How is it changing? How does it compare to other places you’ve lived?

I have many homes. I grew up in a suburb of Houston, Texas. The people I love, people that built me and gave me everything I am, are from Houston. It is where I learned to love poetry. Recently I moved to Madison, Wisconsin, to pursue my BFA in English and dance at the University of Wisconsin–Madison. It is also full of love and grief. These places, like all places, are in upheaval as we overthrow the regime. I don’t know that one location feels like home right now, I don’t know if geography can hold me like that. But home is wherever I can give and receive love. I am home in the group chat, and home at the rallies, and home in my morning playlist. Maybe home is the destination this fight is reaching for—maybe we’ve never been there, but we’re getting closer.

I was arrested on the Brooklyn Bridge coming from Manhattan about a week ago. We were connecting two groups of protesters when police boxed us in and charged. I know very little about Brooklyn, except that the people here have a tenacious love. I think we all have so much to learn from Brooklyn and its gorgeous heart.

What does a poetry community mean to you? Have you found that where you live? Why or why not?

I was raised by slam poetry spaces like Brave New Voices, Write About Now, and Writers in the Schools. Writing has always been inseparable from gathering and celebrating for me. WAN continues to be a beacon of joy for myself and the people of Houston. As a First Wave Scholar at UW–Madison, I’m lucky to be part of one of the only collegiate hip hop and spoken word programs in the country. And everyone in this program is immensely powerful. A poetry community, to me, means a place where we can make together. We are poets, it is our duty. And when we make together, we are cosmic.

June Jordan is the only one I care about.

So many! Deborah D.E.E.P. Mouton, Elizabeth Keel, Emanuelee “Outspoken” Bean and Loyce Gayo were my first slam coaches. They taught me about rigor, persistence, the work of transforming silence into language into action. Many other teachers I’ve spent less time with, but their lessons are precious forever: Chen Chen, Kevin Coval, Michael Snediker, Jennifer Chang, Natasha Oladokun, Gretchen Carvajal, Natalie Eilbert and the many mentors that sit next to me in class and practices. All of their lessons are different, but they each teach me a new way to love this work.

Angela Davis’s Are Prisons Obsolete? has been very informative to revolutionary practice, but also uplifting the revolutionary spirit. Akwaeke Emezi’s Freshwater was the last time I felt the divine in language, and before that, Deborah D.E.E.P. Mouton’s Newsworthy. Ben E. King’s “Stand by Me,” Diana Khoi Nguyen’s “Gyotaku,” Penda Smith’s “How We Became City Girls” and that video of a horse running a cop into a traffic light are all poems that teach me about magic.

I try to read about three books at a time. I prefer a physical book, but it’s more practical to make use of digital resources if one wants to access materials quickly and cheaply. I read mostly in the mornings and at night, with spurts in between when I’m waiting on someone or something. I started listening to more audiobooks during quarantine. I’ll listen while I go on a walk. To move and be moved by a piece of literature is an experience I am grateful for.

I want to create a movement-based series of poems. I study dance as well, so language and the body are connected for me. I think they are really the only things we own. I want my art to name and honor that.

Outside. Whatever that outside is. In Wisconsin, where outside is impossible, I read and write at a window facing outside. I love libraries but they’re awful for reading.

When I was eighteen, a friend of mine let me stay at their apartment in Bed-Stuy while I visited for a workshop with Winter Tangerine. We didn’t really know each other that well, but they offered me that immense kindness so that I could keep falling in love with poetry. That place makes me believe I’ll be alright.

I celebrate the fire, the crackle conjugating pig to pork.

And what I cannot build I break. You know how it goes:

For every violence there is another

waiting. Even as I want to suckle those

Can I only see an end the way it was taught

to me? Who do I arrest if we burn the prison down?

There is a cop in me as good as any, in the violence

of my mind. I need a new way to cook for you.

It is a place of poetry.