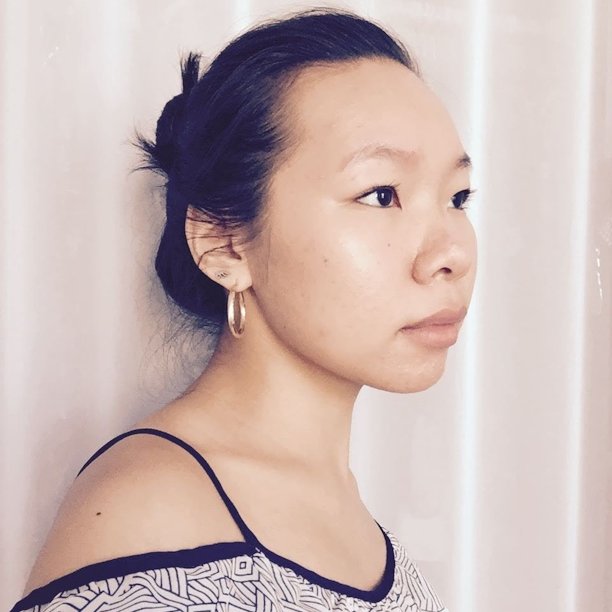 Jade Yeung is a Toishanese American writer and artist from Brooklyn, NY. Her chapbook ANTI is published in the Spring/Summer 2022 issue of Black Warrior Review. She has received support from Bread Loaf Writers’ Conference, the Community of Writers, and Fine Arts Work Center, and her work has appeared in Honey Literary, Queen Mob’s Teahouse, Kissing Dynamite and elsewhere. Jade received her MFA from Rutgers University–Newark, where she was a Trustee Fellow. Follow her @jadedisk on Twitter / IG. On Thursday, September 1, she will read online as part of the Brooklyn Poets Staff Picks reading series.

After news of another “accidental” death

by the police I tell Marcelo, Don’t go jogging

not tonight. As if the daytime were safer

for him or me. We recline into Sunday.

He shows me a video of a baby orangutan

how to use tools to gather water. She tilts

He and I play pretend and I hold Pongo

up to his chest. You see,

nor Pongo; Timpah is herself,

Marcelo is himself, Pongo

is not real. No one, no metaphor,

is here to teach us a thing.

And yet there is brief

safety in these embraces: the coo of

into tools; all the fatal “mistakes”

that could have been water,

the ones that handcuffed him the first or

second time. Ones that pointed to databases

as proof of guilt. “He’s been arrested before.”

he’s been a sequined rock star,

a starfish rocking on the shores

of Condado—limbs spread wide to feel

a friend to the harbor seals,

a man made beautiful, hemmed and

twirling, he’s been a kiss sent to the moon.

how small our love is made.

I try not to cry. My fearful body,

This system of hands

of us. We live different lives

together. Marcelo learned to hold anger

I bathed him once as he grieved.

We watched everything precious wash away.

—From the chapbook ANTI, published in Black Warrior Review, Spring/Summer 2022.

I started thinking through “Warrant” after my partner was arrested. A gym manager confused him for another Brown man. It wasn’t until after the killing of Daunte Wright did I figure out a way into the poem. I was angry (again) at a cop using lethal force due to an “accident,” a defense that gets used too often. The case triggered the storm of emotions I had when I witnessed my partner get arrested. And in my partner’s case it started with a citizen making a racist mistake and then the state making a clerical mistake.

In all my years of being mistaken for other Asian people I never once feared for my life or my freedom. I wasn’t surprised by Wright’s case or my partner’s—the events simply reminded me of what I’ve always known. That I’m allowed to move through the world more freely as a middle-class East Asian. I say this even in the age of #StopAsianHate. I say this even as a queer femme. Even as a survivor. And no matter how much I try to empathize with my partner, I can never understand his racialized experience. I wanted to write a poem that captured this reality without pushing vague sentiments of cross-racial solidarity.

In the drafting process I asked for my partner’s consent. At the time of the arrest we had just returned from Tin House workshops. I resisted writing about what happened at first. It felt like poetry would never be enough, like it would never get us more free.

I’m working on a collection that’s tentatively titled Benevolence. The name comes from the ironic naming of police “benevolent” associations. The manuscript is about the intersections between immigration, child sexual abuse, state violence and love.

Right now I’m tackling a series of visual poems about sexual abuse that center survivorship. I’m taking a more intuitive approach than I did in grad school. I read depressing articles and laws about child sexual abuse. I sketch and scribble. I amend legalese. I scan anatomical designs. I move around InDesign layers. I remember I’m not alone.

I’m also working on a series about pleasure and kink, because I want to see more poems in the world that acknowledge the full agency and desires of survivors.

A good writing day? One where I wake up early, journal, and work on poems. A good day in general? One where I get a good morning and goodnight kiss.

I’m from here! When I was a baby my family lived in Chinatown where my mom owned a butcher shop. Then we lived in Canarsie until I was about nine. We moved to Midwood later, which never really felt like home. In middle school and high school I escaped to other parts of NYC a lot. My most formative years were in Canarsie because it shaped my politics and poetics.

Canarsie was, and still is, home to mostly Black and Brown Caribbean immigrants. As a kid I used to get bags full of hand-me-downs from my neighbors. My most prized possessions back then were a bright turquoise T-shirt from Santo Domingo and a two-disc single of “The Boy Is Mine,” which I listened to religiously (yes Team Brandy, thank you very much).

Canarsie is the ancestral land of the Lenape people. It was mostly woody marshland until it was developed after WWII. You can feel this history in the landscape, from the unusually wide streets to the bungalow houses and overgrown dead-ends. If you go to the edges of southeast Brooklyn you can still see native marshland and fireflies.

As a kid I remember hearing “BK all day!” a lot. My oldest brother always told us, especially our mom, not to wear blood red or blue. He didn’t want us to seem affiliated or like we were taking sides. Looking back it’s hard to say whether it was a legit concern or not. Either way, as a child you don’t forget a warning like that. It was the ’90s and he learned to be overprotective of us. As the only Chinese kid in high school he had to prove he was tough, cool and had skills. His friends were constantly at our house to play Street Fighter and Tekken, and to watch Dragon Ball Z or gung fu films. We became that house, the one with the PlayStation and Nintendo that no one wanted to leave!

A poetry community is a constellation. Attending workshops and readings allowed me to connect with writers from all over. I would just walk up to people and compliment their glittery eyeshadow or ask them out for ice cream. Nowadays, poetry community means having at least one reader at any given moment (hi, you!).

Patricia Spears Jones was my Brooklyn Poets teacher back in 2019. Her poetry and pedagogical style showed me how to be sensual and have fun on the page again.

I want to big up Camonghne Felix (a Brooklyn poet originally from the Bronx) because Build Yourself a Boat resonated with my experience growing up in New York on so many levels.

Now I’m going to cheat a little. In 2018, Tyehimba Jess curated a reading at the 92nd Street Y featuring LaTasha N. Nevada Diggs, Tracie Morris and Douglas Kearney (honorary BK poet). I was moved by all of them. But what really broke me open was watching Kearney rupture poetry with graphic design, and then watching him embody that rupture.

Oh and huiying b. chan, Simone White, Marwa Helal. There are too many!

Cathy Park Hong was my mentor at Rutgers–Newark. She really helped me understand all the possibilities of my manuscript. The best things she said to me were: Find a balance between the personal and the public. Don’t worry about publishing—not all good poems are “publishable.” Your best work happens after your MFA.

Rigoberto González was also my mentor at Rutgers. I loved just shooting the shit with him and watching Ana Gabriel music videos in his office. He would say it’s all “part of the process.”

“Of the Lion” by David M. de León is a brilliant, understated long poem. I admire the structure, its long end-stopped lines and its irregularity. It doesn’t try to be beautiful either in content or on the page. I think this is a subversive and honest way to write about colonization, masculinity and grief. It is formally anti-lyric and anti-romanticist.

I find that I get overwhelmed when I try to plan my reading in advance, especially if the reading pile is staring at me every day. Now I’m trying to pick one writer and read them deeply. It’s like having an imaginary mentor. This month Douglas Kearney is my imaginary mentor.

I’d like to incorporate mixed media or art objects into a poem, kind of like Matthea Harvey. I have an idea that involves gold-wrapped chocolates, but for now they’re just getting stale on my shelf!

Lately my cPTSD has made it hard for me to read or write in public. But I’m lucky to have a big apartment with TWO cozy reading nooks and a big comfy couch.

Coney Island in the fall/winter if you want solitude. Marine Park Salt Marsh if you want to be transported back in time. Any local bodega where you can get a bacon-egg-n-cheese-on-a-roll-salt-n-pepper-ketchup.

by The Police. Fuck the NYPD from BX to BK.

Because we love hard.