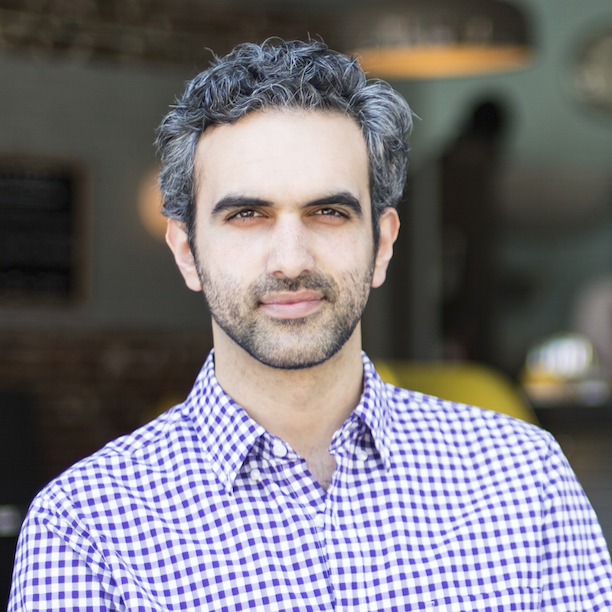 Jay Deshpande is the author of Love the Stranger, forthcoming in 2015 from YesYes Books. His poems have appeared in Boston Review, Sixth Finch, Blunderbuss, Atlas Review, Forklift, Ohio, Handsome and elsewhere. A winner of the Scotti Merrill Memorial Award and Narrative’s Annual Poetry Contest, Deshpande has written for publications including Slate, the New Republic, the Millions and Jacket 2. He lives in Crown Heights.

When I woke up in the city
a man was taking me out to eat
in a purple building. On the table
he had arranged upturned
wineglasses, his silver napkin,
the peel of an orange, the contents
of his many pockets. His hands
fluttered over the objects,
placing and replacing them.

The hour was not late but his face
was moonlight. The man
would not look up. I asked him
how we knew each other.

We were both born
here, he said, and pointed
to the silver napkin, which trembled
as though a small creature
warm and fearful
cringed beneath its folds.

I wrote this poem during a white-hot period of new work in April 2011. It’s a case of something I don’t usually do: it began as a prose poem, and then realized its way into verse for reasons of pacing and development. I’ve always been interested in dream logic that inheres but doesn’t reveal itself completely. We feel that there are sensible gears but we can’t see them under the skin. Around this same period I was really interested in the installations of artist David Altmejd, which perform their sui generis logic very beautifully (although the works themselves don’t aim for beauty).

The weird logic of “Threatening Weather” came all of a piece. I had some kind of trust in that second stanza that explains but doesn’t make sense, and in the suspense of the ending. I’m a big fan of creepiness in poetry, though I wish there were a better word for it. (Maybe Shklovsky’s ostranenie is sort of the same thing.) I read with a more breathless attention when the hairs on the back of the neck stand up. For me, this piece is a kind of ambassador to other peculiar machines I’ve made, which is why it holds a key position in Love the Stranger.

My process generally involves worrying things into existence, by fits and starts. So my work right now is a bunch of different things at the same time. I’m making the last touch-ups to Love the Stranger. I’m working on a short sequence of poems about lethal injection, compassion, and ancient Persian history. I’m rewriting a prose manuscript I’ve been at for six years called Game Show. I’m making up a list of kennings and portmanteaus as an arsenal, I don’t yet know for what purpose (but I think it’s called Flood). I’m tackling a long prose piece, inspired by Ashbery’s Three Poems, in an effort to explore family and unknowability. And I’m continuing to translate Georges Henein, an Egyptian Surrealist who was friends with André Breton and Edmond Jabès. As I write this to you I’m on a sort of minor vision quest, having left Brooklyn for a half-summer stint in southern Europe, so I’m hoping that sun, sunburn and cheap wine will help at least some of these projects find their way forward.

My favorite answer to this question was Sarah Schweig’s from 2013. I still go back and reread that. If I have to add to it, though, a good day for me is one where …
• I see the difference between who I am and the work I do—and then remember that I do this work because it brings me joy.
• I get at least a few minutes with my brother, who is my roommate. So most days are pretty good now.
• I spend enough time with words that the ego and the fear fall away, and all that’s left is the fulfillment of doing the work, whether it amounts to something or not.
• I think about the future, but not too much.
• I end the day among people I love.

I’ve lived in Brooklyn since 2012. I moved to Crown Heights last fall; before that, Bed-Stuy. Honestly it’s been the same neighborhood throughout: I’ve kept the same subway stop, just hopped to the other side of Atlantic. Crown Heights is wonderful—I’ve right now got the perfect combination of people I love and food and drink that delight me, all within walking distance. But there’s also complexity and complicity in gentrification, which presents me weekly with new challenges in how to assess myself and those around me. On the flip side, I have a bedroom that’s pretty much just windows and books—a combination of objects that I hope to one day become.

This was before I lived in Brooklyn, but my first year in New York there was a hot August evening where I headed down to Williamsburg to meet great friends from completely separate parts of my life who, by the strange wisdoms of the borough, knew each other well. And after a drink or two outside they took me to Fette Sau. First time there. I’m originally from Texas, so I know the joys of barbecue, but I learned something deeper about satiation that night. After all the brisket I could ever love, I rode back uptown to my apartment in Morningside Heights, lay under the air conditioner listening to an outdated Ministry of Sound mix and reading Proust. Until I stepped into Brooklyn, I didn’t know such perfection was possible.

The cup runs over here. In terms of departed, Whitman most certainly: he got the love right. Hart Crane for effervescence. I’d also make a bid for Mark Strand, who spent a good amount of time over here and kept his favorite deli on this side of the river.

Among the living there are too many to name. A brief nosegay would include: Timothy Donnelly. Sasha Fletcher. Elizabeth Clark Wessel (now in Connecticut, but still). Kirkwood Adams. Marina Blitshteyn. Julia Guez. Montana Ray. Iris Cushing (now in Queens, but still). Sam Ross. Morgan Parker. Joshua Daniel Edwin. Nalini Edwin. Mónica de la Torre. Ben Lerner. Angel Nafis. Brandon Kreitler. My god, so many others. Oh and Lindsay Turner, who’s no longer in BK but found a raccoon to welcome me when we both moved to town.

Berl’s, because I don’t think I’ve ever felt so much love so consistently in a bookstore/performance space. BookCourt, because it is heaven to read (softly, to yourself) (aloud, to others) in that room.

I’m a frequent subway writer, so a lot of drafts have lived under the harsh fluorescents of the A. My go-to spot is Lazy Ibis on Franklin, where they make a genius of a grilled cheese. I really love to read at Catfish, my neighborhood bar. I also used to do work at Crosby Coffee, which is gone now.

Ali’s Trinidad Roti Shop on Fulton; Catfish, again, is awesome; movies at BAM; Brooklyn Bridge Park; Coney Island, any season, rain or shine; Hot Bird. And, because it’s summer now, Afropunk and the summer concerts in Prospect Park are the best of living in this borough.

Daniel Khalastchi’s new book Tradition is incredible; it made me reassess my relationships to poetry and to Judaism. I’ve brought Joanna Klink’s Excerpts from a Secret Prophecy around Europe with me, and I’m blown away by it. I spent giddy weeks this spring with the collected poems of Frank Stanford. Montana Ray’s (guns & butter) gets richer every time you open it. Morgan Parker’s Other People’s Comfort Keeps Me Up At Night is amazing. I’m pretty sure I will carry Marina Blitshteyn’s Nothing Personal with me for the rest of my life. My fellow YesYes author Tanya Olson’s Boyishly is seriously outstanding and induced multiple jaw-drops. Individual pieces: Walt Hunter’s “Distress Tolerance Handout 5,” Kirkwood Adams’ “Foam Number One,” Bob Hicok’s new poems in Diode, Hilary Vaughn Dobel’s new poems in Blunderbuss.

I celebrate electric tape, that ooze against the boundary—
impossible balcony—and how the clean white walls
of others’ minds can press and know me better,
and what I think I get wrong you keep correcting,
which is a problem, for every time you describe me
as good I’m inclined to agree with you.

It’s like Kunitz: a tribe of my true affections, and it’s here. And mercifully, it hasn’t scattered yet.