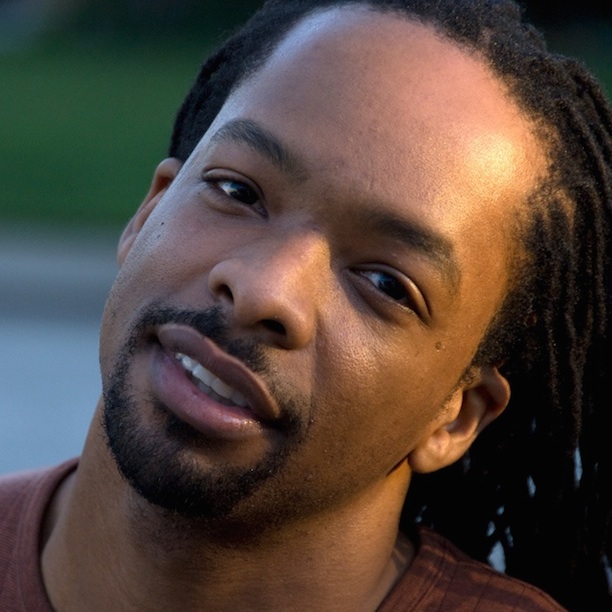 Jericho Brown is the recipient of fellowships from the Radcliffe Institute for Advanced Study at Harvard University and the National Endowment for the Arts. His poems have appeared or are forthcoming in the Nation, New Yorker, New Republic and Best American Poetry. His first book, Please, won the American Book Award, and his second book, The New Testament, was just published this fall by Copper Canyon Press. Brown will read for the Brooklyn Poets Reading Series as part of a Brooklyn Book Festival Bookend Event on Friday, September 19, at Dumbo Sky with R. A. Villanueva and Cathy Park Hong.

Who miss them still. Blues
For my people and what water
They know. O weary drinkers

Drinking from the bloody river,
Why go to heaven with Harlem
So close? Why sing of rivers

With fathers of our own to miss?
I remember mine and taste a stain
Like blood coursing the body

Of a man chased by a mob. I write
His running, his sweat: here,
He climbs a poplar for the sky,

But it is only sky. The river?
Follow me. You’ll see. We tried
To fly and learned we couldn’t

Swim. Dear singing river full
Of my blood, are we as loud under-
Water? Is it blood that binds

Brothers? Or is it the Mississippi
Running through the fattest vein
Of America? When I say home,

I mean I wanted to write some
Lines. I wanted to hear the blues,
But here I am swimming the river

Again. What runs through the fat
Veins of a drowned body? What
America can a body call

If only you knew what blood
We have in common. So much,
In Louisiana, they call a man like me

Red. And red was too dark
For my daddy. And my daddy was
Too dark for America. He ran

Like a man from my mother
And me. And my mother’s sobs
Are the songs of Bessie Smith

Who wears more feathers than
Death. O the death my people refuse
To die. When I was 18, I wrote down

The river though I couldn’t win
A race, climbed a tree that winter, then
Fell, flat on my wet, red face. Line

After line, I read all the time,
But “there was nothing I could do
About Race.”

In Terrance Hayes’ “A Small Novel” (one of the under-discussed poems from Wind in a Box) Hayes writes: “On its blank last page I write the poem // ‘The Blue Langston’ which begins: ‘O Blood of the River songs, O song of the River of Blood,’ / and ends: ‘There was nothing I could do about Race.’”

After reading the poem, I guess I got a little frustrated by the fact that the book had all these exciting personas, like “The Blue Baraka” and “The Blue Seuss,” yet it only gives us the beginning and ending of what would be “The Blue Langston.”

I wanted that poem to exist in full because of my love for Langston Hughes. He’s a figure so many people refer to as “Langston,” not because we ever knew him and not because we mean any disrespect by using his first name. We say, “Langston,” and each of us thinks, “my Langston.”

You come with a little
Black string tied
Around your tongue
Knotted to remind
Where you came from
And why you left
Behind photographs
Of people whose
Names need no
Pronouncing. How
Do you say God
Now that the night
Rises sooner? How
Dare you wake to work
Before any alarm?
I am the man asking,
The great grandson
Made so by the dead
Tenant farmers promised
A plot of land to hew.
They thought they could
Own the dirt they were
Bound to. In that part
Of the country, a knot
Means something you
Get after getting knocked
Down, and story means
Lie. In your part
Of the country, class
Means school, this room
Where we practice
Words like rope, because
We hope to undo your
Tongue, so you can tell
A story or make
A promise or grow a lie.

Any day I actually get a draft out of my body and onto the page, I feel like everything else is really no big deal. That’s about the only time I’m actually relaxed … because the only thing I know I’m supposed to be doing on this planet is writing poems. Everything else often feels like guesswork.

So you don’t live in Brooklyn. Where’s home for you? What’s it like being a poet there? As Jay Z might ask, Can you live?

My home is in Atlanta, but until I moved here, I always thought of New Orleans as the place I had made home. Atlanta’s good for me because I can always find a spades game or some other similar trouble to get myself into. I’ve spent enough time away from people who look like and are like me to still be excited about the privilege of living so close to those people.

Michael Dumanis always takes me to Clover, which has the best French fries on the planet. We usually talk poetry until our faces get tired.

Oh, that’s hard to narrow down. Can I make a list?

Rickey Laurentiis is an OF COURSE. Nobody’s talking about Marianne Moore enough. I love Monica Ferrell. Nicole Sealey is a special brand of genius. John Murillo is my brother in the word. I really do think D. Nurkse’s work is underrated. Who doesn’t want to marry Dorothea Lasky? Whitman’s pretty cool.

I’m sort of behind because I’ve been tinkering with a website and a tenure file more than I’ve been reading. When I left off, here’s what I loved:

Graham Foust
To Anacreon in Heaven

David Keplinger
The Most Natural Thing

Geoffrey Nutter
The Rose of January

Nicole Terez Dutton
If One of Us Should Fall

Lynn Melnick
If I Should Say I Have Hope

Wendy Xu
You Are Not Dead

So embarrassing, I know. I really should be more responsible, but sometimes, I get clouded by things other than what really matters. I have a lot of catching up to do.

I celebrate hair and sing to my hair,
And what I run my fingers through you should run your
fingers through,
For every need in me is as good as a touch from you.

Now that I have authored my tender Father
As if his love
For me seemed a sin,
I turn to the actual awful dodger,
The me who carried a pen
With him on trips to Brooklyn,
And finally begin to see what I said was no biggie:
All those raw Bed-Stuy nights I spent with every Rob,
I lack meter and rhyme, lack what led me to every Jack.

It gives me yet another chance to point out that I keep getting invited to every borough but the Bronx.