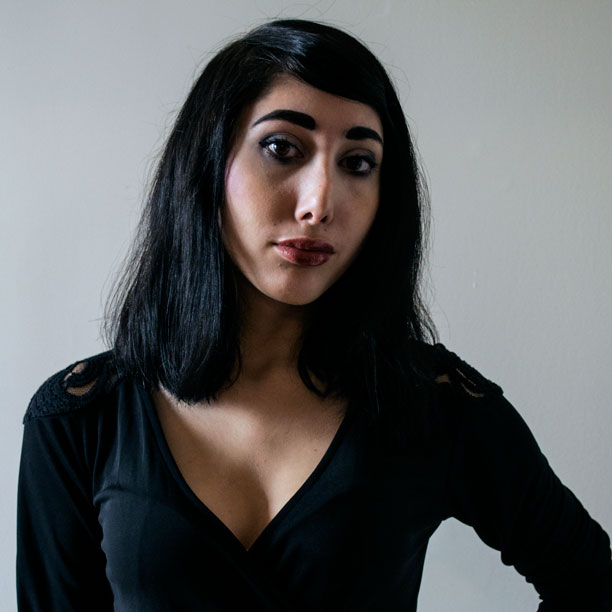 Joanna C. Valente is sometimes a mermaid and sometimes a human. She is the author of Sirs & Madams (Aldrich Press, 2014) and received her MFA at Sarah Lawrence College. Her second collection, Marys of the Sea, is forthcoming from ELJ Publications in 2016. Some of her work appears or is forthcoming in the Huffington Post, Columbia Journal, Similar Peaks, Paris-American, BORT Quarterly and Tinderbox, among others. In 2011, she received the American Society of Poets Prize. She founded Yes, Poetry in 2010 and is the Managing Editor for Luna Luna Magazine.

My Vagina Will Be the Death of Me

In the morning a storm like breath
dimming in dread twists like silver
around fingers, a bit too tight
so it leaves a mark, almost stops
blood but faintly quivers back—

larger like smoke from a house
fire—blacker—heavier like
colonial brick. Part of surviving
is to keep moving, grow up
& ignore the distance where

dogs sometimes bark—most
people will try to write a novel
without using their hands, praying
to a sack of human bones dug up
in the sand, ask WebMD if

we’re hypochondriacs, if a man’s
hand at the base of a woman’s
vulva is haunted with alien symbols,
is a weapon salting infertility,
is an abandoned Victorian decomposing

in Louisiana heat, his hand over
her mouth stales her desire for
anything, her mind sets an ultimatum:
Heaven or Brooklyn? When she
gets home she tweets #StruggleCity

& cuts an apple like sun lighting
the holes between maple branches,
a voice wafting a million years homeless
like burning garbage the shape of
woman’s first body, a hole drilled down

the middle of a long damaged earth.

In many ways, this poem has been brewing inside my body for the past several years; in general, when I write poems, I write them within my body first. I don’t write any words down, I let it travel around my organs, my belly, the backs of my eyes—like growing and giving birth to a child. This is why I love taking long walks or subway rides, because I simply focus on my body, and other people’s bodies, and all of these bodies fusing together; like many poets, I’m obsessed with the body, particularly ones that have dealt with extreme trauma.

I began writing this poem on my iPhone while riding the subway to/from work, many years after my own body was sexually assaulted; for years, I would write poems trying to discover what happened to me, trying to forge a new identity. Because of this, social media fascinates me—we are able to mold ourselves more overtly on a daily basis, become who we want to be, discover new parts. It seemed only natural to me, then, to intertwine poetry, social media and the body. How often do we use Twitter, or WebMD, or Instagram as an outlet for our emotions?

The ease of it, and the nonchalant tone social media takes, often satirizes our lives without meaning to. This is something I’ve become obsessed with, because it is literally changing how we live, how we process information. On one hand, it allows us to objectify ourselves, which can be a useful tool–we now can truly look outside of ourselves. But, it is also 1984-eseque in that it forces us to question what privacy is, if privacy is still possible, and what being human means.

Right now, I’m working on a few different projects: Disembodied Voices is structured in the frame of interviews, centering around a typical American family; the poet-interviewer asks the blunt questions that we all want answers to. The unnamed interviewee, such as ‘mother’ or ‘father,’ subsequently give answers through recalling their dreams. It’s as bizarre and surreal as our unfiltered thoughts.

The second collection, No America, focuses on gods within America; what would it be like if America was ruled by many gods, similar to the Greek myths, where they possessed human flaws, where their own fighting complicated the lives of American citizens?

I’m also collaborating with Lucas Hunt on a chapbook called Leda & the Swan, a kind of creation myth set through Leda’s & the Swan’s perspectives, illustrating how and when and why and where violation occurs.

An early morning with lots of clear, yellowish sunlight draping through tree branches; I would take a walk around Sunset Park, then ride the B63 down 5th Ave to Southside Coffee in Greenwood, because they have the best chai lattes and wifi, not to mention a comfy couch.

After a few hours of writing and/or grading papers, I would make plans to visit a museum or Coney Island to look at art or smell the ocean or maybe both if I play my cards right. The day would end with good food & wine, because all I really need to make me happy are friends, food, and poetry.

I moved to Brooklyn in 2013; first, I resided in Greenpoint with my sister, Stephanie Valente, who is still there. Now, I currently live in Sunset Park, between the park and the BQE inside a brick dream. Both neighborhoods have a special place in my heart, but Sunset feels the most like home.

What I love most about Sunset is the fact that it’s a hidden gem; it’s definitely not “cool,” which is a far cry from the stereotypical self-aware hipster brand of cool that permeates many neighborhoods now. In the summer, Sunset vibrates excitedly with chatter and music, where walking down the street means stopping by a taco truck and admiring the tall brownstones that define the borough, where families have been surviving for years. Where they continue to do so.

I’m also wedged between so many dynamic neighborhoods and a fairly quick commute to Manhattan—minutes within the bustle of Park Slope and downtown Brooklyn, and the strangely ethereal wonder of Coney Island. I kind of feel like I have it all, honestly.

Last summer, I was eating lemon meringue pie while watching The Thing outside in Red Hook across from a Civil War-era warehouse. My friends and I sprawled ourselves on blankets, sharing hummus and bread—then it started pouring. Then a crack of lightning, a wave of thunder. Within minutes, everyone scattered. Of course, I didn’t have an umbrella, so I was soaked by the time I got to the subway. On the platform, a man was playing the soundtrack to Amelie on his accordion. I really was living in a dream.

Right when you think you’re comfortable, Brooklyn will laugh in your face, and take the rug out from underneath your feet, while still giving love & magic. It keeps you on your toes, which is exactly what I need.

The dead talk the most; besides Whitman, it has to be W.H. Auden, who briefly lived in Brooklyn Heights:

from “As I Walked Out One Evening,” by Auden:

It was late, late in the evening,
The lovers they were gone;
The clocks had ceased their chiming,
And the deep river ran on.

There are too many living Brooklyn poets to name—all of their words twist my heart until it beats in a new way.

Community Bookstore because it has the best store cat; Mellow Pages because they share books for free; Berl’s because they exist solely for poetry; Spoonbill & Sugartown because they have the best stationary; and Freebird Books because there’s always something rare and/or unexpected.

Besides Southside in Greenwood, I love Green Fig Café in Sunset, the central Brooklyn Public Library in Grand Army Plaza, Brighton Beach, Coney Island and the subway. Most of my writing takes place in transit within the notes section on my iPhone, because I’m trapped like everyone else.

The Torture Report: What the Documents Say About America’s Post 9/11 Torture Program by Larry Siems

And I Shall Again Be Virtuous by Natalie Eilbert

Bigfoot for Women by Amy Pickworth

Light on the Concrete by Lucas Hunt

I celebrate you without yr body,  And what I birth you should eat under a full moon on an empty stomach,  For every bone gchatting me as a suspended hummingbird lonely as you.