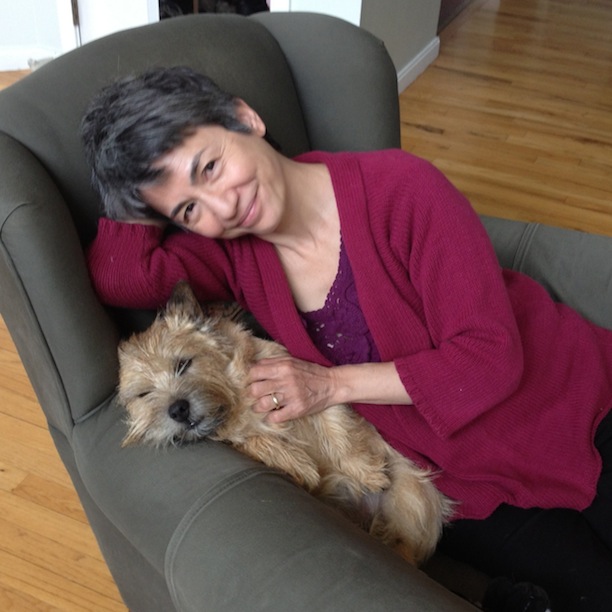 Kimiko Hahn is the author of nine collections of poetry and often finds that disparate sources have triggered her material—whether Flaubert’s sex-tour in The Unbearable Heart, an exhumation in The Artist’s Daughter or classical Japanese forms in The Narrow Road to the Interior. Rarified fields of science prompted her latest collections Toxic Flora and forthcoming Brain Fever (both W.W. Norton). Hahn is an advocate of the chapbook and her latest is The Cryptic Chamber. She loves the challenge of collaboration: writing text for film (Ain’t Nuthin’ But a She-Thing, a 1995 MTV special, and Everywhere at Once, a 2008 film based on Peter Lindbergh’s still photos and narrated by Jeanne Moreau); artwork (Lauren Henkin’s photographic series); dance pieces with Tomie Hahn; and translation of Japanese zuihitsu. Hahn’s most recent award was a Guggenheim Fellowship and she is a distinguished professor in the MFA Program in Creative Writing & Literary Translation at Queens College, City University of New York.

There is something vital
about the Passiflora aliriculatat,

which over a million years varied its cynogens

although the Heliconius butterfly
resolutely adapted to those same poisons

finally transmuting itself into one—
actually repelling predators

as it leisurely fluttered

from leaf to blossom

seeking out a spot for eggs.

What does this demonstrate about toxins
or residence?

Or carrying around a portion of the childhood home

where the father instructs the daughter on the uses of poison
then accuses her of being so potent?

“Toxic Flora” was triggered by one of the many articles in my clipping morgue—nearly all from the science section of the New York Times and all actual paper. I very often use source material and at the time I was bringing articles with me to a bagel place in Boerum Hill, pre-gentrification I hasten to add. I’d read and scribble down captivating words and phrases. Very often what I note down becomes a kind of portal to somewhere. Here it was the notion that one can take in poison from one’s environment and then become poison. It is a means of survival. What a notion for a girl born in the ’50s!

My second collection inspired by science, Brain Fever, is coming out in October. I am completely psyched. These are mostly sequences inspired by neuroscience. And I am looking ahead at a third collection (a trilogy!) that is also triggered by scientific subject matter. One of the new pieces, “The Cryptic Chamber,” is a new chapbook from Epiphany Editions. This and other long poems will explore extinction and preservation. I think. Too early to really know.

Walking our terrier Trudy in Prospect Park or on a pebbly Long Island Sound beach. Then working all morning on my writing. Afternoon tend to business, either for school, committee, project. Evening either meet a daughter or friend for dinner or, more likely, go out with my husband and sit at a bar for a martini and crab cake. Because Harold and I have the same schedule at QC and we are together so much of the day, when we go out, we routinely have to come up with a topic for discussion. This has ranged from psychopathic sex murder (his area) to some aspect of poetry (what I’m up to or a student’s reaction to, say, “The Flea”) or finding an article on Arts & Letters Daily to prompt a discussion. Then more snuggling with Trudy. Sometimes while watching “The Daily Show.” (If a school day, it’s nearly always a great day because I so enjoy teaching.)

I moved to Park Slope around 1993 with my then husband and our two little girls. We were leaving behind a dicey Upper West neighborhood (crack, gun shots, muggings, SROs, footprints on the wall of our vestibule probably from a junkie trying to steal the fixture, my husband while holding a baby was held up in our elevator). I had lived on West 105th St. for nearly twenty years, coming of age in that pocket of Manhattan even before moving there. I had grown to be hyperaware of my surroundings and I saved my own ass once when a guy followed me home (which also happened in Iowa City where I was an undergrad, so my street smarts were pretty keen). We moved to Park Slope because of the public school and because the neighborhood culture felt familiar. Cultural intelligentsia and all.

Walking home from the F train one night, I realized that I was kind of daydreaming, that I could afford to relax my shoulders and guard a bit. That felt like a qualitative leap.

The Mundane: walking home from grocery shopping and seeing my youngest playing during lunch recess with her friends—such a neighborhood moment. Like the sound of the knife-sharpener. Or the fact we can hear both train whistle and ship’s horn. My heart belongs to Brooklyn.

The Extraordinary: from a small park over by Long Island Hospital, I saw both Towers collapse. And dust hit our faces. This of course has defined an era for most of us, Brooklyn or not, and for me, this was literally my point of view: from the Brooklyn shore.

I used to only work in coffee shops and my favorite a while back was the now-closed Rising Café on Fifth Ave. Coffee shop by day, lesbian bar by night. Now I pretty much write at home. Or on a train. I love writing in hotels, actually.

Prospect Park but also walking across the bridges over the Gowanus.

I just caught up to Lynn Emanuel‘s latest.

I celebrate the outer borough,

And what I save, I and you should preserve,

For every particle of me as good particles you.

Get So Dark Bedtime Story

Outer-borough circumstance
got to glean some consequence
cliché-or-not your dues
inasmuch you trite-the-rules
stayin’ good
don’t mean skip-the-woods
for every Lil’ Red a warnin’
since each Wolf is sworn in
no matter which color
or whatever the oughta
take ’em to mat or marble floor
say no score no more
say Lil’ Hood don’t wanta mess
with any death wish—
who the fuck says?
so far, the Poet’s ahead—