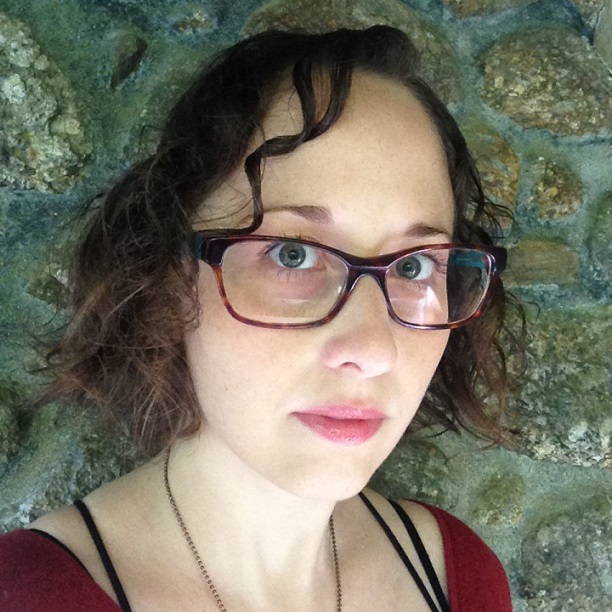 My back pressed to the mattress to accelerate
deflation. Snow angel style. How my body
leaves its shape and then that leaves.

When preparing to change course, draw first
a replica of your heart. The wind takes one.
One to steer your chest.

When crossing the tundra, when taking the stairs,
believe what the atlas tells you. Many before. Abundant
breathing room. The overlooks scenic abundantly.

And when we consider.

When the air stream. When the cushioned decline.

Then the awful gravity of lightness, then how impossible
the human heart.

I wrote “Gravity Engine” following a long weekend with some friend in New York’s Adirondack region. I was packing up, enacting the mundane task of deflating an air mattress, which got me thinking about journeys, travel more generally, and the impact we make on places and places on our selves, and our hearts.

Mostly fiction! I have two young adult novels coming out with McElderry Books, one of Simon & Schuster’s children’s imprints, in summer 2018 and 2019, respectively. The first, See All the Stars, is about a girl navigating her senior year of high school after a devastating friend group breakup that coincides with the end of her first romantic relationship. It’s about heartbreak, self-deception and trying to move on in the wake of guilt and loss.

This is going to sound really corny, but every day is a good day now that I’m working for myself! I left my day job about a year ago to focus on writing and editing full-time. I’m usually overbooked and often work long hours, but it’s done wonders for my mental and emotional well-being. Plus, I get to wear lounge pants to the “office” every day.

College brought me to New York, to the Yonkers–Bronxville area. I wanted to be in or near NYC because I was going to be an actress! (That was a swiftly abandoned dream as I threw myself into the much more practical and lucrative pursuit of writing.) I moved to Brooklyn after graduation because Brooklyn was the place to be. I had a couple of college friends who had already made the move, and one lived in Park Slope, so it was the neighborhood I knew best. In 2004, I moved into an apartment down the block, and save for a three-year stint in Syracuse for my MFA, I’ve lived in Brooklyn ever since: Park Slope, then Gowanus, and now Bensonhurst.

I’ve lived in Bensonhurst, a neighborhood in south Brooklyn, since 2012. So almost five years now. You know the opening sequence to Saturday Night Fever, where John Travolta is walking down a Brooklyn sidewalk to the Bee Gees’ “Stayin’ Alive,” with the elevated subway tracks to his right, and shops to his left, including Lenny’s Pizza, where he orders a couple of slices through the window?

That’s 86th St in Bensonhurst in 1977, and Lenny’s Pizza is still here (but just between us, La Bella right around the corner on 20th Ave is better). I live about a block and a half from where that scene was filmed, and one of the things I love most about Bensonhurst is that it doesn’t look a whole lot different forty years later. There’s a Starbucks now, and a Planet Fitness, but many of the independent retailers are still here, and the neighborhood (especially along 18th Ave) still has many of the old Italian bakeries and restaurants. Bensonhurst is increasingly more diverse. In addition to the Italian population, there are immigrants from Russia, China, Poland and elsewhere. It’s a very family-centric neighborhood; there are large commercial strips along 86th St and elsewhere, but there’s no nightlife to speak of (something that’s definitely changed since 1977), which means it’s actually quiet at night, something I’ve come to appreciate in my thirties in a way I wouldn’t have in my twenties in Park Slope and Gowanus! I work from home, and it’s a great place to write and edit.

I first visited NYC when I was in high school. I loved it, but my exploration of the city was limited to Manhattan on those first several trips. I remember thinking that everything worth seeing was in Manhattan, and feeling perhaps that it was the only place it would be safe to go. I remember one time taking the subway in the wrong direction with two high school friends (a mistake that will be familiar to every tourist and most residents, as well), and screaming, “We’re going to Brooklyn!” when our train pulled out of the tunnel and onto the Manhattan Bridge. I moved to Brooklyn about six years after that subway ride, and I’ve taken the train over the Manhattan Bridge between work and home countless times since then. I’ve come to think of it as “my bridge” and the D as “my train.” I suppose that feeling that something huge and defying ownership can nonetheless be “yours”: that’s Brooklyn.

There is a huge and lively poetry community in Brooklyn; occasionally, I even make it to a reading and interact with other poets “in the wild” at Berl’s Brooklyn Poetry Shop or Pete’s Candy Store or Unnameable Books (which are all great places to start if you’re new in town). One of the disadvantages of self-employment as a writer and editor is a certain amount of enforced solitude, and I don’t take advantage of the plentiful resources or events as much as I’d like. But I’d say that’s more about me, and less about what Brooklyn has to offer.

There have of course been many, but I’d like to give a particular shout-out to Emily Brandt of Brooklyn’s No, Dear journal and press, whom I first met in 2006 or 2007 in a poetry workshop at the 92nd St Y. Emily and I had an instant admiration for each other’s writing, and she kindly invited me to join a small, informal writing group of women poets in Brooklyn that was soul-nourishing in that awkward stretch of years between finishing college and figuring out what the heck came next. No, Dear was in its infancy then, and along with other Brooklyn poets Alex Cuff, Katie Moeller and Jane Van Slembrouck, Emily published the first issue in 2008, and the journal has since expanded to include a reading series and partner with Small Anchor Press to publish chapbooks.

I came to writing through an academic environment, meaning my mentorship relationships have been primarily with faculty poets, first at Sarah Lawrence, then at Syracuse. As an undergraduate, I studied with Kate Knapp Johnson, who served as my Don, then Jeffrey McDaniel, and finally Mark Wunderlich. As a graduate student, I studied with Bruce Smith, Michael Burkard, Brooks Haxton and Christopher Kennedy in poetry, and George Saunders in fiction. Each writer has left their own mark: who I read, how I thought about revision, how I approached drafting, how I contextualized writing among the broader practice of being a human in the world.

Ruth Baumann and Kamden Hilliard are the two poets I’ve most recently published through our chapbook series at Black Lawrence Press, which I say not in a self-promotional way, but because I’ve spent many recent hours reading, editing and drinking in their work—and they haven’t stopped blowing me out of the water. Ruth’s chapbook is Retribution Binary, a long poem in two parts exploring the psychological and spiritual mayhem of the loss of body ownership following trauma, how one both takes that back and can never take it back. Kam’s chap is Perceived Distance from Impact, and the poems in their collection use erasure, remixing, imagining and humor in an attempt to stitch together a self in a world uninterested in the process.

With poetry, I’m definitely a dip-in-and-dip-out kind of reader. I rarely read cover-to-cover unless I’ve been assigned a collection for class (when I used to be a student!). Chapbooks are an exception to this; I often read a chapbook in one sequential sitting since the length of the form easily allows for this. I strongly prefer physical books when I’m reading poetry, although I rely heavily on my Kindle reader for manuscript submissions. I’m a shameless underliner and check-marker, but keep your highlighters away from my books!

I’d like to play more with character in my poems. Ever since I’ve been writing fiction, I’ve been thinking more and more about ways the forms can benefit one another, but I haven’t yet put those ideas into action.

I love reading on the subway, on the treadmill, on train rides and flights. I do so much reading on the train and at the gym! I can really only write at home, though. I’m not a coffee shop or outdoors writer. I admire writers that can work anywhere; I am not one of them.

Coney Island is my favorite place in Brooklyn. I love the carnival atmosphere in the summer, I love going to see the Cyclones play at MCU Park, I love the Wonder Wheel and I love that I’m a ten-minute subway ride from the beach. I also love the Brooklyn Botanic Garden, 5th Ave in Park Slope, the amazing houses in Ditmas Park and the walk along the water in Bensonhurst Park.

I celebrate 1991, and sing 1991,
And what I mosquito you shall libido,
For every spirit belonging to me as good as belongs to you.