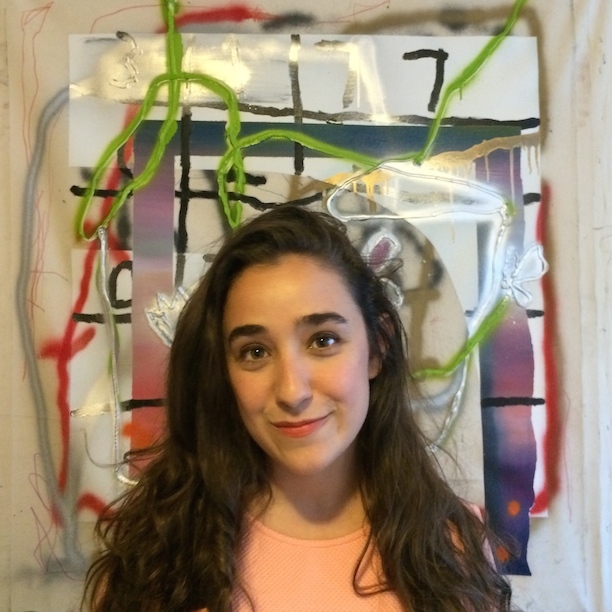 Lizzie Harris’s debut collection is Stop Wanting (CSU Poetry Center, 2014). Her poems appear in All Hollow, Barrow Street, The Carolina Quarterly, Painted Bride Quarterly, Phantom Limb, Sixth Finch and VICE.com. Harris received her MFA from New York University, where she taught creative writing and led a workshop for veterans of the wars in Iraq and Afghanistan. She was born in southern Arizona, raised in Pennsylvania and currently resides in Brooklyn, where she’s a poetry editor for Bodega Magazine.

This was the last poem I wrote for Stop Wanting. I’d just come out of the MFA, where I was so nervous that my poems made people in workshop uncomfortable. They did. Usually those uncomfortable people were in two camps: half gave no critical feedback, but scrawled “so brave” or “thanks for sharing” across the header, and the other half just wanted me to be less explicit. Really, I wrote this poem for Andrew Eisenman. He was the first person to ask me to be less vague, more explicit.

I’m working on a series that’s a product of my growing obsession with the Chauvet cave paintings in southern France. There’s a 5,000-year lapse between when the drawings were started and finished. It’s unbelievable to think about that interaction, to think about the thinness of prehistoric time. Now, we memorialize every detail of our lives, regardless of its significance to other people. It’s almost post-historic. So I’m trying to write directive, post-historic cave painting poems. Really spare, but exact. I’m fully aware of how bonkers “post-historic cave painting poems” sounds.

Any day where I read something, write something, spend time outside and eat something delicious.

I moved to Prospect Heights in July 2010. Now I live on this weird little block sandwiched between Boerum Hill and Gowanus. Neither neighborhood has really claimed it, but it’s a lovely block.

I’m close to a lot of stuff, but remote enough that I don’t always feel the need to go out. My roommates and I have our go-to places that aren’t too busy.

My favorite thing is living in walking distance to the movies (BAM, Cobble Hill Cinemas). I absolutely love going to the movies. For me, it’s the ultimate convenience. My 10-year-old self would think that ruled.

It’s got to be moving here. I walked door to door to all the businesses on Washington Avenue asking for a job until the owner of a diner hired me on the spot. I lived right across from Prospect Park and spent all my free time reading or eating or napping in the park. I felt very independent. I think Brooklyn is one of the best places in the world to do things by yourself.

There are too many great poets living in Brooklyn to name. I’ll refine the question to “Who are your favorite poets to workshop with in Brooklyn?” To which I’ll answer: Amy Meng, Morgan Parker, Cat Richardson, Abba Belgrave and Jenny Xie.

Favorite places to read and write in Brooklyn?

Court Street Grocers is the best for weekday writing. The tables are big, the music volume is acceptable, and there are usually only a few babies (literal babies, not a cool greaser word for people) in there at a time. I also love working at Sit and Wonder on Washington. They have nice outdoor tables and these brie and apple sandwiches that make me inexplicably productive. Cobble Hill Park is the best for reading because the people-to-bench ratio is always perfect.

I just finished In Cold Blood. I begged every person I know to read it because for a solid week it was all I wanted to talk about.

Poem-wise, Hafizah Geter’s 5 poems that just came out in Narrative were unbelievably, maddeningly good. Kelly Forsythe’s digital chapbook, HELIX—her language is insanely fresh. The poems are somehow both otherworldly and, for me, deeply rooted in girlhood. Also, my CSU pressmates’ books—Chloe Honum’s The Tulip-Flame and Lesle Lewis’ A Boot’s a Boot—are both so wonderful.

I pass the store where Biggie
bagged groceries and wonder what will rob
me of my slight utility—a grandfather
clock hissing open.
I raise this vanity like a jack
under my stomach. In Brooklyn
I live like a dodger
of perspective. I love
the distance for how it moves in.