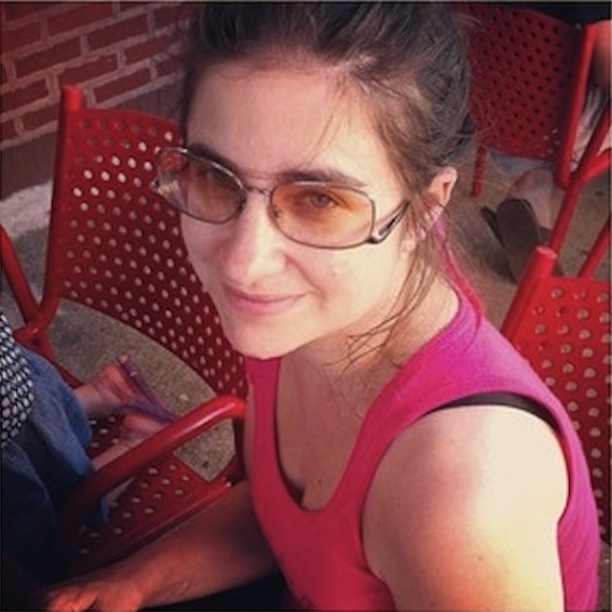 Lynn Melnick is the author of If I Should Say I Have Hope (YesYes Books, 2012). Her poetry has appeared in The Awl, BOMB, Guernica, Paris Review, A Public Space, and most recently in Washington Square and Chicago Quarterly Review. Her fiction has appeared in Opium and Forklift, Ohio and she has written essays and book reviews for Boston Review, Coldfront, LA Review of Books, Poetry Daily, VIDAweb and other venues. She was born in Indianapolis, raised in Los Angeles, and currently lives in Brooklyn.

I give the red-topped toy machine back its decal
as I want something else, better, what you have:

rubber replica of reptile, shock-purple and sinister.
The small business of setting out to do a day

of fear in the sand. Concession calls to wake us
and we are two among the hunched, invisible

to the well-oiled grotesque. For retribution,
a four-ticket ride, eyes spun from upside-down.

I bite and cannot scream. Next whiskey
at a boardwalk bar, a watered-down one of my own.

I could now dance like this pair by the jukebox:
resolved, fat and furrowed. But I am not ugly

yet or cheered. I want a room to keep a home.
I want a bed. (Lemonade. Sand again. Subway.)

Let me sleep on your lap. No tracks to cross
bridges; we are going underwater. Whatever we have done

has sun-marked a line flat to my flesh. It hurts
like want hurts: that sweet. The rare side of no.

Many years ago my now-husband (Brooklyn poet Timothy Donnelly) and I spent a night on the beach at Coney Island and then the next day on the boardwalk. I’m not sure how this poem got written but it is that night and that day that I had in my head as I was writing. Also, I once misheard something someone said on the news as “the rare side of no” and I knew I wanted that in a poem one day and it wound up at the end of this one.

I’ve been writing new poems. Many of them are these weird kind of landscapes because I wanted to write landscapes but it turns out I’m not much of a traditional landscape artist.

Any day that doesn’t end with me cringing at everything I did or said is a good day. Or at least I imagine that would be really fucking awesome.

I’ve lived in Brooklyn since 2002, first in Cobble Hill, now in Carroll Gardens. I love that it feels like what I imagine a small town feels like, by which I mean, it’s relatively uncrowded, I know my neighbors and the shop keepers, my kids’ schools are close by, and we sit on our stoop a lot when the weather is nice, which must be kind of like sitting on a front porch?

But then I can get on the train and be anywhere in New York City. Not that I do that all that often … but I could!

Before Brooklyn I lived in Manhattan, in Morningside Heights and then in the sketchy part of the Upper West Side that was renamed “Manhattan Valley” but, as bucolic as that sounds, there were still dealers hanging out in front of my building and rats the size of cats, one of which I saw run over one of the dealer’s shoes and he totally squealed (the dealer, that is; the rat was completely chill).

One day, several summers ago, I took the train down to Midwood to see the house where my mother grew up, and where my grandparents and great-grandparents once lived (back then the area was part of what was called Flatbush) and I also walked past PS 238, where my mom and uncles attended school in the 1950s.

Oh gosh, there are too many answers to this question.

BookCourt is really terrific, and within walking distance.

Also we live right down the street from the Carroll Gardens branch of the Brooklyn Public Library and that’s just amazing because, even though it’s kind of small, they can order anything in the entire Brooklyn Public Library system, which is huge, and I can pick it up on the corner! And yet I still manage to accrue late fees because I can’t return the books on time; I can’t quite figure out what my problem is with that.

I mostly read at home. I usually take a book with me to the subway but I can’t read on moving trains because I get dizzy and I usually only use the book as a prop so no one talks to me. Oh, and I read in the waiting area of the ballet school where my daughters both take classes.

I love the Cobble Hill Coffee Shop and the Mazzola Bakery because there’s nothing hip or scene-ish about either place and the coffee is good and not fancy. I’m quite fond of Mother Cabrini Playground because it doesn’t get crowded, there’s shade, and my kids are happy there. I like to go to the Brooklyn Flea with Brooklyn poet Dorothea Lasky because she makes shopping fun and normally I don’t like shopping. In March I like to go to the Brooklyn St. Patrick’s Day Parade with my family and with Brooklyn poets Matthea Harvey and Brett Fletcher Lauer and their spouses. Usually there’s a horse with a green tail, but not this year. And, as much as it overwhelms me, I love Coney Island because it’s grimy and odd and incredible.

I just finished Yona Harvey’s Hemming the Water and it’s beautiful; its music is really surprising and the voice is wild and quiet somehow at once. I’m about to start Camille Guthrie’s Articulated Lair and, from the pages I peaked in on, I think it’s going to be pretty awesome too. And I’m anxious to start Melissa Febos’ memoir Whip Smart. I just heard her read and I was blown away.

I celebrate misreckoning,
And what I have done you should not have to do,
For every trace of blood in me as good as drained for you.

I am sorry; I am not adaptable enough to use some of these words. Nor am I cool enough.

As a kid we used to visit every summer from Los Angeles and it was like suddenly the world made sense to me and I made sense in the world.