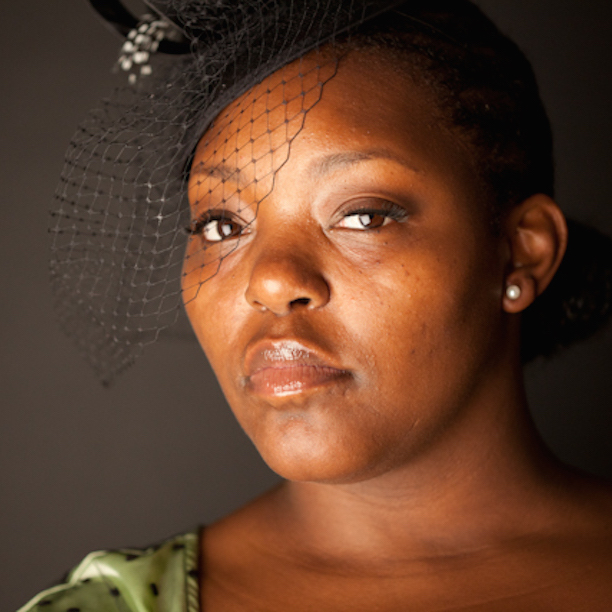 Mahogany L. Browne is the author of several books including #Dear Twitter: Love Letters Hashed Out Online, recommended by Small Press Distribution & About.com as one of the Best Poetry Books of 2010. She has released five LPs of her poetry and toured Germany, Amsterdam, England, Canada and recently Australia as 1/3 of the cultural arts exchange project Global Poetics. She is anticipating the release of several poetry collections in 2015: Smudge (Button Poetry), Redbone (Willow Books) and the anthology The Break Beat Poets: New American Poetry in the Age of Hip-Hop (Haymarket). An Urban Word NYC mentor, Brown is the publisher of Penmanship Books as well as Poetry Program Director and Friday Night Slam curator for the Nuyorican Poets Café.

The men at the bodega say good morning to
the women with black slacks. Sometimes, they
wink at the young girls with tight jeans. Their
eyes scan the starched school uniform shirts,
white and crisp. But when the men come, they
scowl and pour piping coffee into cardboard cups.
Their lips purse into a disapproving huff. Their eyes
avert, then cut, like switchblades.

The woman makes herself at home in the seat of a
fold out chair. The storefront is her day gig. She sells
loose cigarettes for two quarters until her red hoodie
bulges, tumor sized, on her right side. She uses her left
hand to wave to the children coming home from
school. They live in her building or up the block.
“They my babies,” she sighs. The crease between her
cheeks and nose look heavy, some days. But on good
days, when the sun is high and the wind whistles thru
Crown Heights like a young man with his first paycheck,
she wears a jet black wig cropped behind her un-pierced
ears and powders her nose to dull its shine. Her smile
dances of several missing teeth. The butt of her cigarette
is a bronze pendulum, swinging amber into the dusk.

There is a man that cleans the vestibule with a dirty
mop. His patois is heavy like coco bread in milk. He
really isn’t the superintendent, just some man they pay
to mop over the urine and spilled beer. He never speaks
to us when we pass him. He never holds open the door,
even if our arms are heavy with groceries and shopping bags.
So we tuck our smiles in our pockets and limit our answers to
curt head nods. We hold our breath until we make it behind
our apartment door. There we will take a deep pull of Potpourri,
gingerbread and everything that reminds us of home. We stand
and wait for the assault of sticky candy and sour coffee to slide its
odious body back into the building’s main vein, where the man with
the stiff mop waits for Brooklyn to go back to normal.

I was having a bit of writing drought. And gave myself the assignment of just writing what I noticed around me. Brooklyn is unlike any other city in the world. It really is a planet. And so I began the habit of going outside and just observing my neighbors: the cigarette lady (rest in peace), the bodega owners (later burned out of their building), the superintendent (gone missing now … ); all of them colored my world. It was a surprise it took me so long to see such a rich story just waiting to be told.

A collection of poem and stories about my childhood and the brazen disregard we had for death.

Any day I don’t have anything to do but drink coffee and sit around my neighborhood.

I lived in Bed-Stuy for five years and Crown Heights for seven years. I love my block even though I walk it often and get mad at my new neighbors. It’s becoming so gentrified that it feels like they are trying to change Brooklyn into a strip mall. And I’m from California. I know all about strip malls. When I moved to Brooklyn sixteen years ago, I fell in love. The streets were alive and the people didn’t quiet their voices for cops. They sat on stoops and played music loud. They sent their kids to the bodega and everyone recognized each other. I see you is such an imperative gesture … A nod at one’s humanity is the most generous offering. These days folks care about their laptop and their tiny section cornered off in the new hip café. They look bothered when you sit next to them. It’s unfortunate and uninspiring.

Bad: I remember some slum lords torching the building two doors down from us. It ate up the entire block. We were evacuated and homeless for a week due to water damage. Good moments include: free concerts in Prospect Park; the house party that used to rock out on Sundays in Fort Greene; Dance Africa festivals out in the streets of Brooklyn; the smell of happiness and fruity drinks everywhere; Juvee—tossing powder and paint and dancing to a steel drum band … I’m still experiencing Brooklyn.

Unnameable Bookstore on Vanderbilt is my favorite. They buy books back and you never know what gem you will find there. Close second is Greenlight Bookstore. They get me. They have great reading series and a great poetry selection available.

Cheryl’s for brunch. Gladys’ for dinner. Eve’s for hot wings and beer. Sepia for cocktails and quiet. I have a thing for spots named (and mostly owned) by women. They always make me feel safe.

The Light of the World by Elizabeth Alexander … A memoir—but so lovely. So poetic. Yesenia Montilla’s The Pink Box—everything one needs in their collection.

I celebrate myself,
And what I offer you is that type of hallelujah.