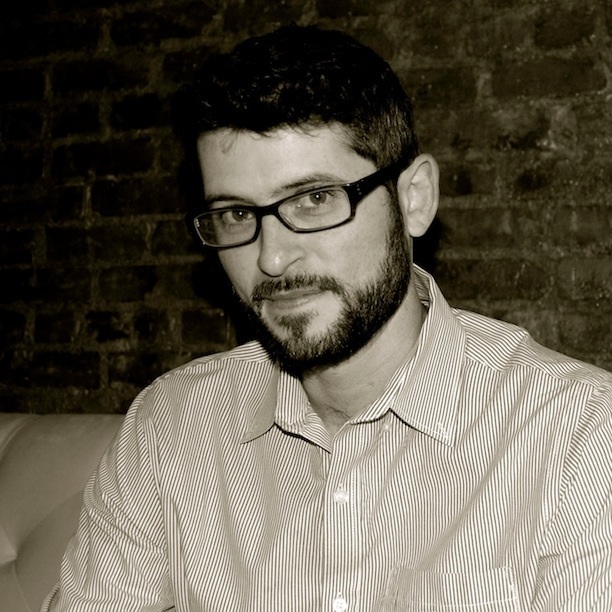 Martin Rock’s poems have appeared in Bateau; Best New Poets 2012; Black Warrior Review; Conduit; DIAGRAM; Forklift, Ohio; H_NGM_N; La Petite Zine; Third Coast; The Journal and various other places. He is the author of the chapbooks Fish, You Bird (with Phillip D. Ischy, Pilot 2010) and Dear Mark (forthcoming from Brooklyn Arts Press). He is Editor-in-Chief of Loaded Bicycle and contributing editor to Epiphany. He has taught writing classes at NYU, the Jackson Hole Writers Conference and Berkeley College in Manhattan. The recipient of fellowships from Port Townsend Writers Conference, Starworks and Inprint, he is a PhD candidate at the University of Houston and holds an MFA from New York University. He lives in Brooklyn, though will soon move to Texas and get a dog and name it something literary.

Something I Am Not

The grass on the lawn is alive
& last night my grandmother
opened her mouth & vanished
beyond the portico none of these trees
are native my brother said beside
the elevator he asked me to stop
the car I waited while he pulled
a green fig from its branch he sees
living things everywhere to eat
from the woods outside our childhood
home he appeared with morels
we sliced them they looked like veins
of leaves without flesh but also
like grey flesh when he cuts the fig
its meat is blush & squishy
how does he find such nourishment
even in cities the man who lives
in the forest makes a forest of his own
thoughts she must have known
this about him it’s been years
since I’ve killed a fish & eaten it
& did not understand death then
& do not now in the car on the way
to the airport my brother is calm
all of us he says everything dies he sees
a tree on the side of the highway
asks me to stop & this time I pretend
not to hear him he flies back home
to his girlfriend on the mountain
in Colorado & I return to Brooklyn
where I will walk to the library
in the new fall air, find “American
Sonnets” by Gerald Stern on the shelves
& sit down to write this poem.

In late 2011 my brother and I went to California to be with my grandmother in her last days. My brother, an expert forager, amateur mycologist, fishing-guide and general outdoorsman, spotted a fig tree on the side of the road. As our grandmother lay in the other room, my brother broke open a fig and passed it around the room for everyone to taste. Something about the process became an objective correlative for the body of my grandmother and the finality of her death. I had never seen a fresh fig before and was amazed at its otherworldly color, a fuchsia I imagine to be the color of the flesh of gods. The simplicity and silence of that image is conflated with the death of my other grandmother a year before in Queens, whose mouth hung open cavernously as her caretaker sobbed and tried repeatedly to close it. Because that was my first close experience with loss, I will always see her open mouth when I think of death. The poem was written at the Brooklyn Library’s main branch at Grand Army Plaza and came out pretty much as is, with minor edits here and there. I don’t often write such transparently narrative poems, but there it is.

I’m still finishing up the final edits on a chapbook of exploded sonnets (most of which are no longer recognizable as such) in response to Mark Rothko paintings called Dear Mark. The chap should be out soon and will be published by Brooklyn Arts Press, a community I’m so pleased to be a part of. I’m also trying to reorganize my full-length book manuscript to send out before I head off to Houston to start my PhD.

Something like today: I’m asked to contribute to a journal or anthology or community of poets and I feel that writing poetry is a meaningful and useful endeavor, even if it does nothing. Also this morning before and on my way to work I read a good book of poetry. Any day that starts with good poems is bound to turn out all right.

I’ve lived in Brooklyn since I moved to New York in 2008, with a brief break when I moved in with my girlfriend (now fiancée) on Bleeker St. So about 5 years total. In Brooklyn I’ve lived in Ditmas Park, East Williamsburg, Crown Heights and now Park Slope. I love Park Slope for its proximity to Prospect Park, the fact that I know my neighbors (one of whom is a poet and bookmaker) and for all the gorgeous brownstones and the peace and quiet (after the neighborhood’s 10,000 kids are put to bed). It’s also a good place to play with other people’s dogs on the street if you don’t have one of your own. Most of what I love about Brooklyn is its vibrancy, its array of languages and its diversity. Another of my favorite things about the Slope is its proximity to Ugly Duckling Presse, where I volunteer whenever I can.

1. I was biking through Brooklyn and saw a sign on a church that read “De los Testigos de Jesus,” which I thought was a sign about Jesus’s testicles, and had a laugh. This is more a story of my own ignorance of the Spanish language than of Brooklyn but location here counts for something.

2. Living in a renovated pinball factory in Williamsburg with a poet friend above a band of decent guys who would forget it was 4 AM and practice drunkenly about 3 weeknights a month.

4. Chasing down the cops on their way up the stairs to bust up a friend’s birthday party by telling them “What you’re doing is illegal. Come back outside and have a conversation with me.” It totally worked, and somehow they didn’t follow up on their threat to throw me in the paddy wagon.

Yawp. (I need to get me one of those t-shirts!)

I’m a fan of Berl’s Poetry Shop, located in the flea (and in all of our hearts).

Otherwise, I applaud any bookstore that is able to keep its doors open and to keep selling real live book objects. My favorite in NYC is McNally Jackson for the poetry section downstairs, and because they always have so many Brooklyn poets’ books down there I’m going to stake a claim for that small area as a secret enclave of Brooklyn. That’s right, I’m getting all Brooklyn imperialist. Someone should make a flag/sticker.

I’ve heard of people sleeping past their stops on the subway but I’ve only ever read past mine. Though I haven’t done it yet, I’ve often thought of getting on the subway with the express purpose of reading my way across Brooklyn. I used to like to write at Glass Shop a lot when I lived in Crown Heights. In Park Slope, I like to read in Prospect Park. Sometimes I compose poems on my bike and write them down after.

I tend to read multiple books at a time so here is a list of either recently finished or in process (all of which are excellent):

Your Invitation to a Modest Breakfast by Hannah Gamble

You and Three Others Are Approaching a Lake by Anna Moschovakis

The Cosmic Serpent by Jeremy Narby

The Art of Recklessness by Dean Young

War with the Newts by Karel Capek

Breaking Open the Head by Daniel Pinchbeck (Thanks, Jarrod!)

I celebrate otherworldliness
& the consciousness of plants
and what I have tasted
with my own magnanimous tongue
or perceived as the slackening
of light or geometry of speech in air
you should consider the fissure.
For every insubordination against time
& reason seems to me as good
and crafted as any souse of spray
from which appears the earth.
What’s good is not what’s new;
is or isn’t; you are or aren’t you.