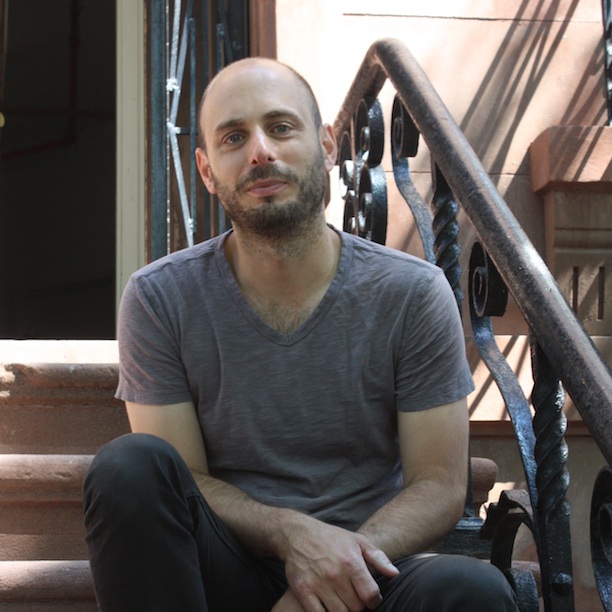 Matt Longabucco is the author of the chapbook Everybody Suffers: The Selected Poems of Juan García Madero (O’Clock Press, 2014). Other work has appeared recently in Capricious, the Brooklyn Rail and Parkett. He is a co-founder of Wendy’s Subway, a 24-hour library, workspace and meeting space for writers, artists and readers in Williamsburg. He teaches at New York University and lives in Brooklyn.

The troglodyte in leathers,
the cartes de visite in the library display case,
the strange action of balloons in drafty rooms,
the rust on the car’s white paint job
that makes the machine-nature of the car
overpower its beast-nature,
the poem that can never be written—
the one called “Teens on the Beach.”

To share my thoughts with others
in this odd, frankly historical way
is bliss. Four-times-folded pages.
People who don’t know when to shut up,
or who seem insensible to their own slightly
bad odor, fill me with tenderness (after all—
my beastly odor, yesterday),
but it’s a tenderness I must nevertheless
go home and stub out
like a cigarette
in a dish.

Do not go inside police stations or lawyer dens,
do not bathe in public fountains
till after midnight,
do not snatch up the beautiful children
in the square to augment the audience
at your poetry reading or workshop,
do not tell someone they stopped making
sense an hour ago just as they reach
the climax of their murderous harangue.

I can take a pounding,
emotionally, and have learnt to grasp
from the spine, like a creature.
I don’t mind fucking up my good looks
with drugs and sleep deprivation
and lack of proper nutrition.
As if I were not already invisible,
like the man in Kierkegaaard
who leaves no footprints.

—From Everybody Suffers: The Selected Poems of Juan García Madero, O’Clock Press, 2014.

One day in 2012, Matthew Rohrer—an excellent Brooklyn poet—brought his daughter over to play with mine, and while the girls were chasing each other around Matt and I talked about Roberto Bolaño in a way that made me realize how much I’d been thinking about that profound writer. After they left, I suddenly had the idea to write the poems that are described but never cited by the poet-narrator of the first and third parts of Bolaño’s novel The Savage Detectives. I re-read the novel and filled my notebook with all the hints it offered. Elvis Presley, for instance, who lends the above poem its title, makes a few appearances in the book—he’s an interesting and fraught figure, isn’t he, a beautiful boy become broken man, a white popularizer/thief of Black music, a cultural ghost somehow impossible to relinquish. I also had to consider, throughout the process, what it would mean for me, a white American, to write (“translate”) the poems of a fictional Mexican teenager. In the end, I felt I stood to learn something significant, and took permission from Bolaño himself, who while fully aware of the potential vectors of cultural imperialism is above all deeply faithful to the idea of literature (a political exile, he said he was a citizen of the library). No one has thought more about evils both metaphysical and historical than Bolaño, and he can be vicious to artists he finds callow or corrupt, but at the same time he is one of the most generous and inviting writers there is: funny, sexy, absurdly enthusiastic. He wants you to risk and search. I once saw a poet friend walking around a bookstore with a notebook that turned out to contain a list of writers she’d been turned on to by Bolaño and was now tracking down to read. Anyway, the poems that resulted from this engagement were both mine and not mine, and this one is a good example of one that feels as though written by a displaced version of myself: someone younger and quicker, tougher but also more vulnerable. Writing the poems, I took on those qualities—and with them, of course, more than I bargained for. My life was falling apart (all shook up). I can’t for the life of me remember where I cribbed that Kierkegaard.

Longer, essayistic poems—it’s more like they’re working on me. They’re still taking shape, but several strands keep reliably appearing: the social world of poetry, close observation of spaces that compel me, fatherhood, some fascinating books I’m reading, and a slew of large fears about the state of the world and a human capacity for violence I’m sometimes afraid we can only confront rather than defeat or even transform.

I’m easy. I don’t write every day, but if I get the chance it’s wonderful. The other day a friend saw me and said he could tell I’d just written something, I seemed lighter. I like to wander and waste time. I love walking my daughter to school. If the stars align, I meet Rachel for tacos.

When I moved to New York, in 1998, it was to a room in Park Slope. I shared the apartment with my friend Scott, who grew up in Bensonhurst (meaning he can’t drive or ride a bike but his mom’s eggplant parm is pure magic). After that I moved with my wife to Astoria for a few years, then back to Park Slope, then to Ditmas Park (where my daughter was born), then Windsor Terrace, and then away from Brooklyn, to an NYU dorm and later a sublet in the East Village. But as of January I’m a Brooklyn poet again—I moved to Bed-Stuy. It’s a lovely place, both physically with its long blocks of theme-and-variation brownstones and their gorgeous gardens, and also in its striking neighborliness. It’s the first place I’ve lived where I’m manifestly a gentrifier, and I’m conscious of changing the space when I walk down the street. I’m forced to confront that phenomenon every day. And it’s complicated, since the economic reality is such that everyone is being made to ask whether or not we can share Brooklyn. Part of me wants to believe it’s possible, but there are structural inequities, greedy developers and rapacious interests that work mightily against us. And ordinary people can do a lot better, too. People moving into enclaves—in Bed-Stuy, young white people—can do better about opening businesses that serve the entire community, patronizing existing businesses or renting from longtime residents. Or just using their eyes and ears to figure out how things are done respectfully. I rent a floor of a brownstone from a family that has owned the place for 10 years or more: dad, mom, son, baby on the way. It came down to them choosing between me and two young women who wanted to share the apartment: they’d offered to pay a year’s rent in advance! I was glad the family chose the teacher with the kid instead. I’ve never been so grateful to appear respectable.

Last Friday I met my friend over by the Williamsburg Cinema, that sewer grate yawning over surging hellfire. While I was waiting for him I looked up at the apartment building across the way and remembered a night I’d spend there, once, at the home of an incredible painter I know. She’d hosted a dinner for me and a few other writers who’d collaborated with her, and it ended up being a wild, inspiring event. Then my friend showed up, and we went and saw Mad Max with a bunch of other folks who also appeared to have nowhere to be on a weekday afternoon. Afterwards, he rode me on his motorcycle to this place we know nearby, we went up on the roof, tiptoeing because we’re not supposed to be up there, and smoked cigarettes and commiserated about our respective finances, which are, to put it mildly, totally fucked. Across the way, the ivy that carpets an entire steeple in one thick green triangle rippled over its surface with every breath of spring wind. Then I went and met my girlfriend, had a drink with her parents in a trendy new restaurant I’d never been to before but somehow recognized completely, and went from there to a graduation party at her brother’s nearby apartment, whose crooked cabinets and incredibly inconvenient railroad layout reminded me a lot of that first Park Slope apartment of mine. In other words, for me the defining Brooklyn experience is to move through a Brooklyn alive to the echoes of the many Brooklyns I’ve known.

Stacy Szymaszek is one of my absolute favorites for sure. In her recent poetic journals she is, without making a big deal of it, writing a poetry more embodied than virtual, and more faithful to complex contemporary identities than most would or could articulate. She has a powerful sense of tradition that liberates rather than burdens her. And she sees Brooklyn up close—she walks her dog around its streets, in fact, and looks down, where he sniffs and digs, at its stones and detritus. She looks up at the weather and the built environment, the signs and signals. She overhears conversations, tracks and revels in every kind of cycle and change. A ritualist of presence.

Unnameable has a brilliant staff and unique selection.

I made my own! Or actually, with a group of friends, helped start a collective writing space and library called Wendy’s Subway, on Metropolitan near Graham Ave. It’s a place to meet and get to know people, and make and share work. It’s a lifelong dream to share a space with friends—only in Brooklyn.

I’m a member of the Park Slope Food Coop and it’s a special place to me. If I’m talking a lot about communities, that’s definitely one I admire and enjoy. The people who run it are the best, they’re like the crew of a ship or something, just totally gung-ho and tight-knit and devoted, and at the same time performing the most worthwhile kind of political action, i.e., highly practical and utterly without glory. The coop really runs on member labor, the food is the best you’ll find anywhere (and the cheapest), and it’s only gotten better in the years I’ve belonged.

Like Chris Hosea in his interview, I won’t try to improve on the original …

I celebrate myself,
And what I assume you shall assume,
For every atom belonging to me as good belongs to you.

It’s still thick with pals, and this is a golden age for donuts.