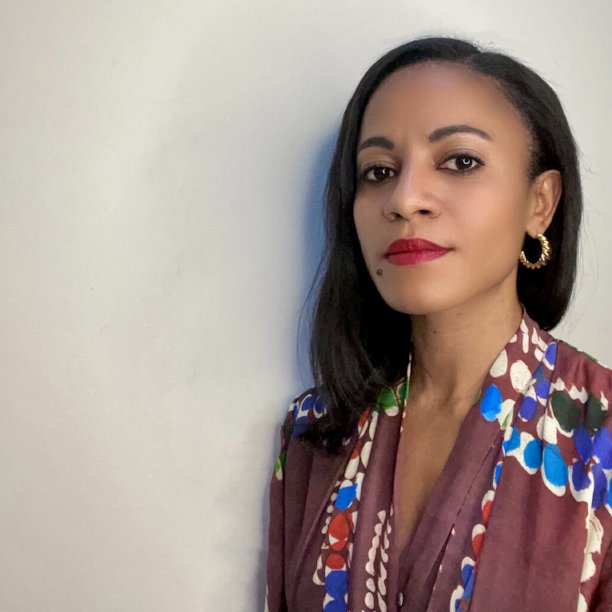 Nadia OwusuAuthor website opens in a new window is a Brooklyn-based writer and urbanist. Her memoir, AftershocksBook link opens in a new window, was selected as a best book of 2021 by over a dozen publications, including Time, Vogue, Esquire and the BBC. It was named one of Barack Obama’s favorite books of the year and a New York Times Editors’ Choice. She is a winner of the 2019 Whiting Award in nonfiction, and her writing has appeared in the New York Times, Orion, Granta, the Paris Review Daily, the Guardian, the Wall Street Journal, Bon Appétit, Travel + Leisure and others.

Pay no attention to the amazing shrinking of the man.

Wipe away the scrolled hairs he sheds in the sink and shower.

The volcanic mountain range on his head is not to be gaped at.

Shield your eyes from the yellowing setting sun of his eyes.

When he speaks of the future,

lucid dream with him.

There is no proof of the truth of a dream.

He will tell you about where he will take you after your high school graduation,

about the giant tortoises on the island of Seychelles where his grandfather was exiled,

of the dueling he will do for your honor when the boys get past your Coke-bottle glasses,

and the tears that he will try not to cry when he gives you away.

On Christmas day, give him a journal

to help him mark his hours,

but not to count them.

Tell him good morning and kiss him goodnight.

Tiptoe past his room in the dark to listen to him breathing.

Put your ear to his heart to diagnose spirit in silence.

On days when he does not know you,

when he is quaking to interior percussion,

the talking drum that summons him home to red clay earth

and the kola nut tree,

curl up at the foot of his bed and tell him about the weather and about last night’s prom.

Do not tell him that no one asked you to dance.

because you wanted to hide and there was nowhere to go but outside yourself;

that inside was bursting with hoarded feeling.

Read to him from the book you are reading

and remember him teaching you to read

from the Herald Tribune and the Worcestershire sauce label.

Pretend that he still knows you.

Remind him that he used to jump up and down with every word you got right.

Remind him that you are his girl,

Do not acknowledge his slipping away,

even as they take him from you,

out into the rustling breeze, the singing birds, and flowering trees

that are also pretending it is just another spring.

Brooklyn Poets · Nadia Owusu, "How Not to Say Goodbye to Your Father Who Is Dying of Cancer"

This is a full-circle moment because I wrote this poem in a Brooklyn Poets workshop with Jason Koo in 2015. I was working on my memoir at the time and was struggling with a section about losing my father to cancer. My resistance was physical. I was tense and my back and head ached. I don’t remember what Jason’s prompt was, but I know that something about it helped me find a way into what I’d been avoiding for so long.

A novel. It’s in a tender stage, so I’ll leave it at that.

It’s summer. I start my morning early, outdoors, if possible, with coffee and a good book. Then, a couple of hours of writing followed by eggs on toast, a walk with my husband, a phone call with one of my aunties, maybe yoga or a workout, meditation, a snack. After that, a subway ride to spend the rest of the afternoon at the beach, followed by dinner with friends.

I moved to New York from Kampala when I was eighteen, to attend Pace University. I first lived in the dorms in the Financial District, then I got an apartment with two friends in Fort Hamilton. I’ve lived in New York my whole adult life, mostly in Brooklyn.

For six years, I lived in Bed-Stuy, a few blocks from the Bedford–Nostrand A/C, and I loved it there. We had wonderful neighbors. We lived across the street from the old Boys High School, which is a beautiful building. Our street bloomed with pink and white flowers in spring. And there were so many delicious places to eat nearby. I’m Ghanaian so I was very pleased that I had several jollof options!

A few weeks ago, I moved just over the border into Bushwick. Although it was love at first sight with our new house, I was a little worried that the neighborhood wouldn’t feel like home in the same way. But things are looking good! We’ve already met some of our neighbors who seem great. Several times a week, we hear singing and percussion from the Angolan capoeira center a block away. And I’ve discovered lots of great restaurants and cafés. Plus, I can still walk to all my faves in my old neighborhood.

During the blackout of 2003, I had an amazing candlelit dinner at a neighborhood restaurant I no longer remember the name of. They were giving all the food away, and we ate and drank with strangers late into the night. As a child—I don’t know why—I was really into the idea of a midnight feast, and that night felt like what I’d imagined.

I have lots of poet friends, but I wouldn’t say that I have a poetry community. Many of my closest friends are people I met working in restaurants through college and graduate school, and they do all sorts of things. Some are poets or other kinds of writers, musicians, visual artists, filmmakers, actors, activists and organizers, designers, etc. Some have made careers in the service industry. I love that we’ve stayed connected even as our lives have taken different directions. That said, spending time in poetry spaces is joyful and nourishing.

I grew up in several countries in East Africa and Europe, and Brooklyn wasn’t much in my consciousness. But my father read and wrote poetry, and through him I discovered and came to love many poets and writers who I now know had a Brooklyn connection—Whitman, Maya Angelou, Richard Wright, Derek Walcott and June Jordan, for example.

My mother left when I was very young, and especially as a teen, I turned to the work of Black women writers for counsel. Not all are poets. They include Audre Lorde, Toni Morrison, Ama Ata Aidoo, June Jordan, Paule Marshall, Gwendolyn Brooks, Maya Angelou, Nikki Giovanni, Alice Walker, Tsitsi Dangarembga and many more.

Recently, I read Solmaz Sharif’s Customs, and it challenged me to articulate sharper questions about the ideas of home and belonging, some of the central themes of my own work.

I keep saying that this is the year I’ll read Middlemarch. I don’t know why I’ve never gotten to it.

I’m often reading several books at the same time—for teaching, reviewing, research and events. Plus titles from my ever-expanding, pure-pleasure TBR list. I prefer to read physical books, but I occasionally read on my Kindle. I take copious notes while reading for work. Otherwise, I underline passages I might want to think more about later.

I like to read while having dinner at a bar. That’s how I met my husband—at a bar down the street from my old apartment in East Williamsburg. He’s a jazz musician and was about to lead a jam session there. He asked a question about the book I was reading and was genuinely interested in my answer.

I love Prospect and Fort Greene parks, but we have so many wonderful little parks too. My place in Bed-Stuy was right by Herbert Von King Park. I’m exploring my options in the new neighborhood.

I celebrate the bobby pin wrenches,

And what I unlock you’ll sashay into,

For every tomorrow reclaimed for me as good unfurls for you.

Because there’s so much spontaneous dancing in the street.