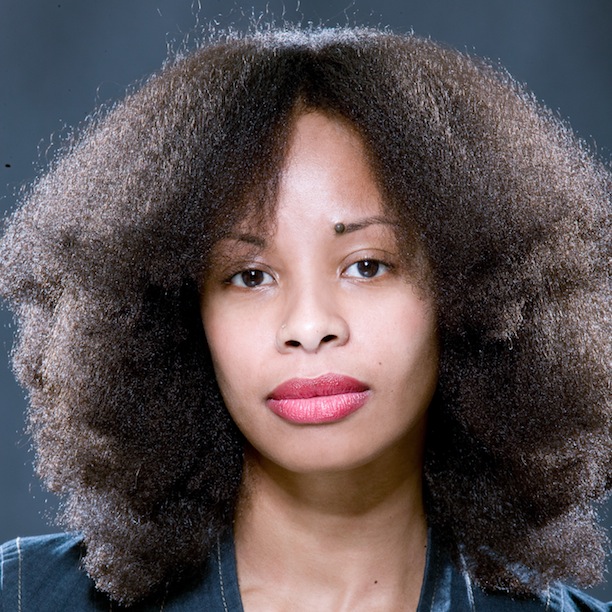 Born in St. Thomas, U.S.V.I. and raised in Central Florida, Nicole Sealey is a Cave Canem fellow and the recipient of a 2014 Elizabeth George Foundation Grant. Winner of the 2012 Poetry International Prize and selected for inclusion in Best New Poets 2011, her work has appeared in Callaloo, Harvard Review, Poetry International, Ploughshares, and Third Coast, among other literary online and print journals. She is currently an MFA candidate in poetry at New York University.

Give me tonight to be inconsolable.
Give me just the duration of a good

night’s dream to wade in wreckage,
so the death drive does not declare

itself, so the moonlight does not convince
sunrise. I was born before sunrise—

when morning masquerades as night,
the temperature of blood, quivering

like a mouth in mourning. How do we
author our gentle birth, the height

we were—were we gods rolling stars across
a sundog sky, the same as scarabs?

We fell somewhere between god
and mineral, angel and animal,

translated the world into man. Then believed
a thing as sacred as the sun can rise

and fall like an ordinary beast. Deer sniff lifeless
fawn before leaving them, elephants

encircle the skulls and tusks of their dead—
none wanting to leave the bones behind,

none knowing their leave will lessen the loss.
But birds sometimes pluck their own

feathers, dogs can lick themselves to wound.
Allow me this luxury. Give me tonight

to cut and salt the open. Give me a shovel
to uproot the mandrake and listen

for its scream. Give me a hard face that toils
so closely with stone, it is itself

I promise to be happy tomorrow.

I’d been thinking about “Imagine Sisyphus Happy” and had written the first and last lines of the poem in the fall of 2010—it took a couple more years to complete. I’ve always been interested in the many ways in which animals—humans included—grieve. For me, grief is not always a singular emotional state following some kind of traumatic event but, rather, an ongoing mindset. The fortunate have an innate death denying function: to live happily, they pretend they or their loved ones will not die. Sometimes, I lack such a function and believe the opposite is true: to live happily, one must embrace mortality. I suppose, too, I’m obsessed with the primitive and problematic idea of anthropocentrism. So that worked its way into the poem as well.

I’m thinking about the Ghanaian artist Kane Quaye and his fanciful coffins, “trade marks” of the recently deceased—like a fish-shaped coffin for a fisherman or a shoe-shaped coffin for a shoemaker. After funerals, these beautifully carved and painted coffins are buried with the dead they incase. Let’s say I’m working on and thinking through the functionality of art.

A good day is one good line and black boys alive and well in my home state, not murdered by racist white men.

I’ve lived in Brooklyn for more than a decade. For the first year, I lived in Flatbush. After Flatbush, I moved to Crown Heights, where I am currently.

Lucille Clifton said in an interview once, “children—and humans, everybody—all need both windows and mirrors in their lives: mirrors through which they can see themselves and windows through which they can see the world.” Clifton was talking about race—specifically the disadvantages that come with being white and having only mirrors or being a person of color and having only windows. Because the world is what it is, I’m oftentimes staring out windows. It feels good to come home to Crown Heights, get off the train, and see my reflection.

If I’m not reading or writing, I’m probably eating. My favorite eateries are Cheryl’s Global Soul on Underhill for its brunch, Puerto Viejo on Grand for its pernil, and Richol Bakery on Nostrand for its everything.

Horse in the Dark by Vievee Francis has an unease about it that scares the hell out of me. And, I’m absolutely in love with Amaud Jamaul Johnson’s “Cherene,” a ghazal from his most recent collection, Darktown Follies. The last couplet reads: “A modern romance. You undress, but never say a word. / I touch your ribcage, take my thumbs, & split you like a pomegranate.” Gorgeous.

Why mess with perfection?

I celebrate myself,
And what I assume you should assume,
For every atom belonging to me as good belongs to you.

Sorry, the most I can do with these words in one week is admire them.

It has both windows and mirrors.