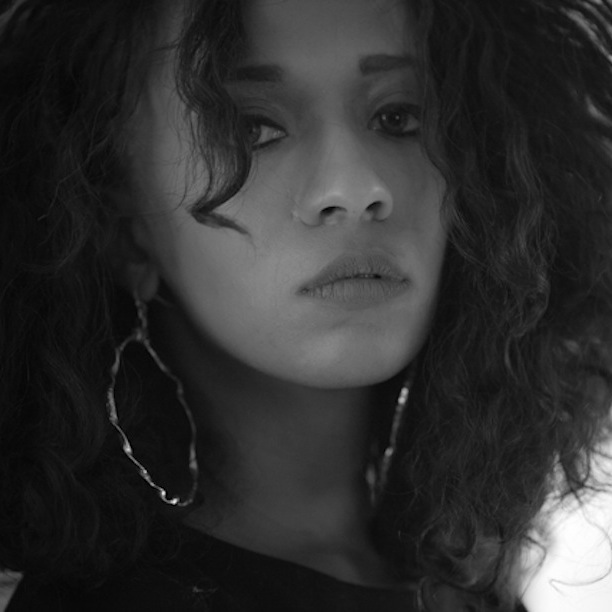 Rachel Eliza Griffiths is a poet and visual artist. She is the author of Miracle Arrhythmia (Willow Books, 2010), The Requited Distance (Sheep Meadow Press, 2011) and Mule & Pear (New Issues, 2011), which was awarded the 2012 Inaugural Poetry Award by the Black Caucus of the American Librarian Association. A recipient of numerous awards, including fellowships from the Cave Canem Foundation, Provincetown Fine Arts Work Center, Millay Colony and Vermont Studio Center, her visual and literary work has appeared in American Poetry Review, Poets & Writers, Indiana Review, Mosaic, Folio, Transition, American Poet and elsewhere. Griffiths’s newest collection, Lighting the Shadow, will be published by Four Way Books in 2015. Currently, she teaches creative writing at Sarah Lawrence College and lives in Carroll Gardens.

The woman in blue overalls
rubbed her fingers over
my open mouth. A woman
whose eyes gone away
to a different time of blues.
Time before war. Time
before bite, dog & bullet.
She rubbed my neck,
murmuring, Us can’t fly
Us can’t fly, mah Teacake,
mah Sweetbread Boy. In my mouth
I tasted Lake Okechobee’s apology,
forty miles wide & sixty miles long.
The jook of water washed
over my dusky jubilee.
This dead boy’s old music box
lost somewhere in those waters.
I felt it all in her hands rubbing me
the night before she washed him
down for the last time, singing in his
ear. His ghost is here too, giving
me a try & hum. Both of them
weeping at this split of spirit.
Her hands gripped his stone-cold hands
around my throat, making angels
pluck their cat-gut lyres. Her hands
beckoned the brass ghosts of
Bahaman drummers to leap,
fly, walk along a field of low clouds
with dusty feet. O morning woman,
I want to say to her
when they get ready to pull the lid
over me & this boy. O woman,
I got to say, love ain’t even quiet in here.
Not long as I’m in this boy’s hands,
opening a strawberry mouth
over his half-smiling stitched lips,
Woman, me & this white silk
canopy, going to bear your man
‘til he wake up again. When he wake up
again, singing to you. Us can fly,
heah Janie, Us can fly for certain.
Gal, just wait for us
to wake up in your arms.

In Zora Neale Hurston’s novel Their Eyes Were Watching God, Hurston has this devastating line after describing how Janie prepares to bury Teacake. Hurston writes, “He would be thinking up new songs to play to her when she got there.” And so I was thinking about music, the music between any two people and perhaps that it continues and can become stronger despite death and/or because of it. The imagery of her dressing his body is so powerful. And that she includes his beloved guitar as an extension of his body, their song. While you can feel her grief you also experience her joy. In so many ways she was forced to kill and to survive her greatest love.

I’m editing poems for my fourth collection of poetry, Lighting the Shadow, which will be published by Four Way Books in 2015.

Usually, I’m often working on poems, old drafts of poems. Lately I’ve been drifting toward some sort of hybrid experiment of prose and poems.

Writing in the morning, with yoga or meditation before or after the writing. Time for reading. A long walk with my dog after writing. Hearing good things from my friends. I’m a fan of having a nap at some point. Certain days are studio days, which means going over to DUMBO and doing a photo shoot, painting or some editing. A quiet dinner in my neighborhood makes me happy.  If I have energy for it in the evening, some television or reading or a walk for ice cream. Usually I try to balance desire for ice cream and reading. I used to go out for literary readings quite a bit but now I go to bed pretty early. I don’t know, this changes all the time. But I do feel that a “good” day involves writing or visual art at its center.

I’ve lived in Brooklyn for seven years now. I’m in Carroll Gardens. I’ve also lived in Crown Heights as well as on what some would consider a border street between Red Hook and Carroll Gardens. My visual art studio is in DUMBO.

There are so many things about my two main neighborhoods–Carroll Gardens and DUMBO–that I like. Walking is a major part of my day so I cover a lot of ground between Carroll Gardens and DUMBO. I love the community gardens that were part of my first place, closer to Red Hook. They’d show movies on the wall. Crown Heights is becoming quite different than what it was like when I lived there. My sister lives there now and has a great apartment and we celebrated her birthday this summer at Franklin Park, which was fun. In DUMBO, I’m all about the food truck culture and 68 Jay Street. I like to check out the photo and movie shoots that are always in progress. There’s a great energy in DUMBO, especially when they have the open studio visits. When I’m there, I like to sit with friends in my studio and watch the boats on the river. In Carroll Gardens I can walk down the street and hear old men speaking in Italian and there are several old-school social clubs. There are lots of children and dogs and places to eat, read, chat and sit. It’s nice to have so many writers and artists in the neighborhood and I love walking down the leafy streets when it’s quiet or at night, late. I like gathering random objects from the stoop sales or when things are left out on steps–they often become materials I can incorporate into my art.

Trying to figure out how not to run people over who step into the bike lane when I’m riding over the Brooklyn Bridge–it’s a combination, good, bad, and in between, isn’t it?

I feel as though my Brooklyn experiences can be as magnificent and complex as my feelings and recognition of duende. Brooklyn has a hell of a lot of duende on any given day. You go with it and against it all the time. I mean, Fulton Street Mall is a miracle. You see everything. Wouldn’t want it any other way. Last season, I went to the Brooklyn Nets’ last home game at the Barclay Center and the creative use of profanity and rants I heard in the stands was extraordinary. It was delicious.

On another note–lately, in my neighborhood, there is a clear and arresting image of the twin beams of light shooting up into the night sky. It’s not a Brooklyn-specific experience, of course, but there is something about it, given where this country is right now, that makes me want to include it here as a response to your question. If you’re in Brooklyn Heights on the Promenade it is so overwhelming, so much bigger than any borough or city or nation. Light is memory here. And memory, for me, is mostly wordless.

There’s a small café called Maybelle’s that I like. There’s also, a block from me, a small restaurant called Bar Bruno. Van Leeuwen is good because you can read, write and have ice cream all at once. I wander into BookCourt several times a week to look at all the new and wonderful titles and to see if there’s an event that looks interesting. I’ll get something from the store and then go over to Café Pedlar, which is on Court. I also like to walk down Clinton Street to Cobble Hill Park. Building on Bond is sweet as well. If I’m in DUMBO working at my studio I’ll sit outside on Jay Street in front of Brooklyn Roasting Company. I also like to walk over to Brooklyn Bridge Park and sit there or on the piers too.

I like to bicycle down to Brooklyn Bridge Park along the piers. I like BAM events. Once it gets mild I like to bike ride over to the Brooklyn Art Museum and the Botanical Gardens. There’s also nothing like a good Brooklyn bench to sit on and watch life go by. I also adore the Mermaid Parade out on Coney Island. And anywhere I can eat in Brooklyn that’s amazing, which means I’m pretty much eating everywhere.

Claire of the Sea Light by Edwidge Danticat. I just ordered Jhumpa Lahiri’s new novel. Andrea Barrett’s latest, Archangel, is amazing, as is Joan Silber’s Fools. I always read more than one book at a time. I took a workshop over the summer with Carole Maso at the Millay Colony and I’m re-reading Ava. These days I’ve also been re-reading Seamus Heaney, Jack Gilbert, Ai and Muriel Rukeyser. There are some wonderful books I’m looking forward to this fall as well, including books by Kamilah Aisha Moon, Jamaal May, Paul Harding, Victoria Redel and Roger Reeves. I love when a new season of books is near.

Brooklyn’s complexity of culture, neighborhoods and landscapes is a species unto itself. As I answered these questions I thought of so many communities I like or which interest me that I could not work into my response. For example, I spend way too much time in Williamsburg at Pies’n’Thighs because I’m willing to wait out on the corner in the middle of winter or in their crowded front dining room for a slice of pie! There are intriguing coves everywhere, from books to music to clothing to architecture, to language itself. Brooklyn rhythms are ineffable. When it’s fall and summer the street fairs and block parties are not to be missed. I’m excited for the Atlantic Antic, which happens at the end of the month (food again!). But truly, I never get tired of Brooklyn and its history is remarkable. Where it’s going … wow … And while I find myself leaving New York to travel there is nothing like getting off the plane at JFK or Laguardia and explaining to the taxi driver that I’m not going to Manhattan, but to Brooklyn, that I’m going home. I love our borough’s pride and swag and sweetness. Brooklyn is imagination, it’s the men at Carroll Park playing bocce ball and the smiling women who hand me coffee at Mazzola before I begin my writing day. Being a person who needs to see and be near water, I spend some part of my day near the river. I can hear foghorns at night and often smell the water. There are so many different cultures everywhere and there’s an energy (that is often parodied and teased but admired) here that is special. I could be flip and say, why not Brooklyn, but it’s so much more than that. When I think of Brooklyn I’m grateful and fortunate to say and to feel that I live in a place that is enough as its whole and I hope that nothing will erode the faces and traditions and imagination here.