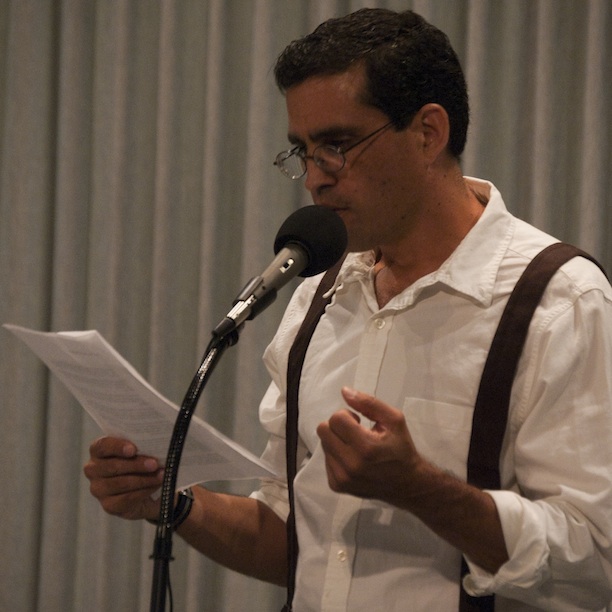 Rodrigo Toscano’s newest book of poetry is Deck of Deeds (Counterpath Press, 2012). His previous collection, Collapsible Poetics Theater, was a 2007 National Poetry Series Selection. Forthcoming from Fence Books in 2016 is Explosion Rocks Springfield. He is the recipient of a New York State Fellowship in Poetry, and his poetry has appeared in numerous anthologies, including Against Expression, Diasporic Avant Gardes, Angels of the Americlypse and Best American Poetry. His poetics plays have been performed at the Disney Redcat Theater and the Ontological-Hysteric Poets’ Theater Festival, and his radio pieces have aired on WPIX FM, KAOS Public Radio, WNYU and PS.1 Radio. His poetry has been translated into French, Dutch, Italian, German, Portuguese, Norwegian and Catalan. Toscano works for the Labor Institute in conjunction with the United Steelworkers and the National Institute for Environmental Health Science. He works out of a laptop, tethered to a Droid, residing in airports, occupying poetics in midflight. He enjoys running and writing for the North Brooklyn Runners from his home base in the Greenpoint township of Brooklyn.

Fourteen Superimposed Pockets of Formally Unified Subjectivity as Mass-Aggregate Social Subject, or Politesse Politique, or, Monologue of the “Free Radical”

“The problem’s TOO big

A millennium of oppression, and no one
put a halt to it

The millennium ahead, also absent of
my direct volition—

doubtless, will remain the same (I can’t know really—you’re
right, but)—it’s an ill-fitting robe this thing of Conscious
Response … if you don’t mind, I’ll—

[a take off from Brecht]

“I’m not part of any movement I’m telling you”

“What’s more is, you’re preaching to a convertible here”

“you see, if mortality itself can’t be conquered—what’s the use?”

‘I love you earnestly, so tenderly’

‘But don’t let it trouble you any further’

head in the headwind—

Wow. I hadn’t thought about that poem in years! It’s from a book called Platform. It’s essentially a polemic that’s taking on a stubborn apolitical stance in both politics and poetry. It’s largely in the “voice” of my intended target at the time, a poetry scenester who’d often goad me about my allegedly too heady political commitments. Actually, let me correct that, it’s not in the voice of that person, but rather it’s an aggregate rendering of an ideological perspective given “a voice.” Platform (still, my longest book to date), was deeply concerned with fleshing out and hyper-extending ideological say-abilities.

The poem is a fairly typical poem of mine from that era, which also included to a large extent the explorations in To Leveling Swerve. Both these books are chock-full of pop-up voices and fractal dialogue exclamations and exchanges. I didn’t know it at the time, but these concerns would all lead to Collapsible Poetics Theater (the book I am most known for to this day; I aim to knock it off its block soon). CPT was an explosion of performance activity. The voicing technique that would become CPT can be seen in the poem “Fourteen Superimposed Pockets of Formally Unified Subjectivity as Mass-Aggregate Social Subject, or, Politesse Politique, or, Monologue of the ‘Free Radical’.” That is, I came to free my poetics from the singular reader format for a number of years. I am now happily back to the singular reader mode.

Two things. I just finished Explosion Rocks Springfield, which will be published by Fence in 2016. The book is made up of 80 iterations of the following line:

The Friday evening gas explosion in Springfield leveled a strip club next to a day care.

Each iteration is one page. The iterations consist of analytical-philosophic queries on the line, lyrical diffractions, and para narrative documentary twists and turns. There are 16 different sub-topic variations that appear throughout the book. Every single word of the primary thematic line is fully explored (exfoliated, extended, exploded) multiple times.

The book was written with a fugal structure in mind, seeking the effects of content density, tension, and return. Continual re-figuration of all themata is intended to invite the reader to experience a pleasurable engagement with a material transparency that is neither prepackaged (“found”) nor fancied from thin air (“inspired”). Explosion Rocks Springfield is an aesthetic appreciation, stern (loving) criticism and determined re-imagining of several dominant tendencies in American avant-garde poetry of the last decade.

Right now though, I am hot on the tail of a new poetic project, which will be called Flight Plan. It will be a multi-sectional book that tackles personal and social definitions and dealings through the rubric of a single flight—from highly abbreviated dialogues between passengers to notebook observations of people to the specifics of the plane and piloting. It’s an idea that I’ve had for a long time, but I hadn’t found a way “in” to it until very recently. I’m so hot on it, it aches; I can’t wait to dive into it every single day.

A good day for me looks like this: an early morning writing session, followed by an effective start to my work day in my home office (I’m a nationwide labor coordinator); a bike ride to eat lunch somewhere; a continuation of an idea-rich work day; a running workout break where my previous training is found to be paying off; another bike ride to work by laptop in a coffeehouse (or visit a worker center); an early evening editing session of my morning writing session over a micro brew; finish off the day by practicing Bach fugues.

I’ve lived in Greenpoint in the same place (in the historical district, on Milton Street) since 1999. 16 years! It’s hard to believe.

What I like about it now is that it’s like living in a dense little village. The Franklin Street corridor has a hustle and bustle due to the large number of bars, restaurants and shops that have sprung up. We now even have shoreline access with Transmitter Park. We have the East River Ferry too. When I am not traveling for work, I can pretty much do anything I want by just walking out the door. It didn’t used to be like that at all. There was virtually nowhere to be in Greenpoint when I moved there. One had to go south to Williamsburg, and even there, it was sparse and mainly industrial. Greenpoint had grit and an edge that is largely lost now.

Back in the day it was also very quiet. I liked that it was almost 100% Polish with some Puerto Rican. I still know key phrases and expressions in Polish. The neighborhood also had its sprinkling of poets and artists. Everybody knew each other. People from other parts of New York City were incredulous that we’d chosen such an “isolated” “un-central” place to live. I have to say too, the tenor of the conversations at the first coffeehouse and first bar or two was so different than now. You’d overhear spirited political and art conversations wherever you were. You’d see people reading interesting books. Like I said, it had edge for the simple reason that finance capital hadn’t yet decided to snatch up the neighborhood block by block. Still though, to this day, it’s hard not to like Greenpoint.

The current, defining “bad” experience is the continuation of the flattening of culture by the global finance settler class (in tow with its codependent “indie creative class”)—it’s been hard to conviviate around all this. It’s also been hard to establish the word “conviviate” in the English language.

A “good” experience is having all that maleficence poof into thin air once the snow melts, the sun is out, the big trees get green, and your bike is newly tuned and cleaned and ready to go out for a wherever long day in Brooklyn.

Hart Crane. He’s so weird. There’s an undergirding to his poems that is hard to package for general consumption. Often I’m like, Is this a great poem? Or the worst poem I’ve ever read? I find it’s usually both at once. There’s a wonderful one-at-a-time to everything he does. Like junk properly arranged in the pit of a landfill, with just the right lighting scheme to go with it.

I’ll be honest: I’ve lost my feel for bookstores in general. It’s sad, because they figured so prominently in my youth. The pleasure I’d get from seeing the same old unsold books of poetry side by side was one of a long drawn-out seduction. There’s nothing like handling a book many times before purchasing it. To this day, books acquired in bookstores have a heft and warmth that can’t be compared to mail-delivered books. But I don’t have time to wander into bookstores anymore; and if I do have the time, well, I am in the trenches with writing.

Notwithstanding, my favorite bookstore is Berl’s. It’s a total act, Berl’s—an act of defiance against the impossible. If poetry is impossible, then a bookstore in prime real estate under the Brooklyn Bridge is a cosmic flipping-the-bird at reality.

My beloved Brouwerij Lane. The brews, the coziness, the lighting.

Transmitter Park. The breezes, the coziness, the lighting.

I Hope It’s Not Over, and Good-By, selected poems by Everette Maddox. Truly a refreshing read. Maddox was a master of the quick and quirky.

I celebrate all ceasefires,
And what I submit to, you should submit to,
For every thought to harm me as good does harm to you.