Sampson Starkweather is the author of The First Four Books of Sampson Starkweather and numerous chapbooks from dangerous small presses. He is a founding editor of Birds, LLC and works for The Center for the Humanities at The Graduate Center, CUNY where he helps run the Annual Chapbook Festival and Lost & Found: The CUNY Poetics Document Initiative.

This banana clip was emptied on a single cloud
shaped like a gazelle. No one
noticed it in the sky, what with the civil war
on, and me sitting in a field of sunflowers muttering
abracadabras.

The Tomorrow lost its father,
shaved and took off its shoes.
Shotgun barrels loaded with Prozac®—
nobody said there’d be bread.

Would there be less pain if we had no face?
The thieves would have a field day on eBay.
There’s no way to exaggerate a cucumber sandwich.
The point is—green is perfect.

Use love’s napkin. Use it for abortionburgers.
Use it for the ketchup of car-crashes,
the inner-child’s missing balloon,
my 21 bullets for the next shape you take.

—From The Waters, in The First Four Books of Sampson Starkweather, Birds, LLC, 2013.

Get ya popcorn! If this answer was a movie it would be called Let There Be Boring. I wouldn’t want to dispel any of the potential magic the poem may retain by explaining it … or its origin. It’s like those people who say at readings, “What you need to know for this next poem is blah, blah blah … ”, you don’t need to know shit to enjoy/experience a poem, ever, that’s the beauty of reading poetry, it requires nothing except for you to be who you are: you bring to it whatever you know and don’t know, and often what makes poems great is what you don’t know. Which is essentially the principle of negative capability: being comfortable in mystery.

This poem is sort of a throwback and a challenge for me to relate to because it’s so different than my current writing. Sonically it’s interesting, and if sound, nonsense, language-play and absurdity are your thing, then it’s probably working. I think this is literally the oldest poem of the entire First 4 Books, and was written over a decade ago. At that time I was primarily interested in a punk-aesthetic or anti-poetics, in this case simply wanting to write what I felt was the opposite of whatever an MFA teacher was writing in the early aughts … anything that subverted or flipped the switch on all the shitty, predictable, conservative, Caucasian, tepid, I-faux-lyric-narrative New Yorker kind of poems that seemed to be everywhere, won all the awards, “the Status Po” or whatever you want to call it. I was after energy, freedom & magic (whatever that is). Specifically, to subvert the expectations of the reader as a way to create surprise, chaos, disruption, syntactical static, jagged abstraction, uncomfortable music, a “jump poetics” of non sequiturs, juxtaposition, and rhetoric to create something paradoxically familiar, simultaneously combining the experimental, sentimental & realistic, something approaching the sublime through the ecstatic doubt of language (meaning), while trying to make a music that felt like truth.

These poems are what I call Transcontemporations of César Vallejo’s Trilce, and I was trying to find a new way to write, think, be inside a poem, to find a “form” that would allow for an ecstatic freedom that I found in Vallejo; the way his language could be radical, obscure, abstract, obtuse, even medical or made-up, and at THE SAME TIME completely heartbreaking, personal, intimate, gut-wrenching, affecting, universal, and that trick/effect is still something I’m after … just in different ways now. But still, how many poems end “Banana, Banana!” so in that sense, it may even be historic.

Too much. Most of my time lately has been organizing the NYC/CUNY Chapbook Festival, working on Lost & Found Series IV, and editing, marketing and publishing new books from Birds, LLC by Sommer Browning, Niina Pollari, and Monica McClure—all three of which are game changers for me, and have affected/influenced the way I think and feel about writing & poetry and the possibilities of the book.

As far as my own writing I’m working on a series of bleak shit-talky poems on each department of the United States Government, which I’ll probably be assassinated for! And which I’m hoping to collaborate with Ben Pease to make video-poems for (like this one), likewise of this long poem sequence Flowers of Rad (and this one).

A series of pop text-message poems in collaboration with Ana Božičević, in which the titles of the poems are animated GIFs or images, sort of a vis-po thing, but more with the intention of affecting as many different humans as possible, and possibly exploring different distribution methods, digital shit (Big Dada), coming to a phone near you!

Lately everything I write or think about is filtered into this giant impossible spiraling out-of-control book-length poem I’ll never finish that I was thinking was sort of my The Morning of the Poem, I was gonna call The Night of the Poem but it’s failed so spectacularly that now the poem is more about how I can’t write that poem and about all the ways it failed. I decided to put all the ephemera of my life and thinking into the poem, economic debris, advertising, facebook messages, emojis, emails, a few broken poems, a meta-novel about an artist who wants to write a novel about seaweed (like seaweed is the protagonist) based on a book he read where a fictional poet wrote that book, essay sketches (one is about the history of the animated gif), and these things I call “circle poems,” which are like textual gifs on a loop, audio ouroboros, in fact just writing this I realize it’s really just a giant poem about the art of failure.

A book called Some Notes on Nothing, which is a sort of Kierkegaardian mash-up of lyric fragments, aphorisms, prose, flash-memoir, philosophical musings and self-appropriated material about … NOTHING.

A book of collaborative performance pieces called The Tennis Court Oath by John Ashbery by Sampson Starkweather … I don’t know what the book will be about (tennis!?), but the poems will be read by the poets who will be sitting high in the umpire’s chair, while below an infinite tennis match is played out, at night of course, and on grass, in which the players, naked, without a ball or racquets (played by dancers) run at full speed and launch their naked bodies over the net and slide on the court toward their opponents’ feet (who are also their lovers), there will be tears and blood and grass stains and possibly … poetry.

When I don’t have to use my AK.

I don’t know, I really don’t, time and I have a pretty loose relationship, we’re both like “look, can’t we just chill and see what happens,” so far it’s working out, I write my poems and dance around and I let time do her thing … she seems to be thriving, so … idk, I guess about 4 or 5 years.

I live in Ditmas Park; there are so many things to love, the diversity, the big Victorian houses, huge trees, wide streets, but I guess what I like the most is that my friend Eric Amling is my neighbor (proprietor of White Jazz) so if I run out of whiskey, art supplies, 3-D glasses, lasers, or need advice on grave plots or 70s décor, etc., I know Eric has me covered.

I suppose it was burning a Billy Collins book (like a mini Burning Man of poetry) in broad daylight in Prospect Park on a grill with stolen matches from KGB Bar with Dan Magers and Jonathan Marshall to make the booktrailer for Dan’s Birds, LLC book Partyknife, which consists of a “montage of everything awesome” laid over The Trouble of Poetry being burned all to the tune of “Assassins” by Lightning Bolt. Check it out.

Umm, this is a trap. All my friends, too many to name. Brooklyn poets never die.

My favorite Brooklyn poet is Paige Taggart, but um, you knew that. Here is why: Want for Lion.

Again, too many, but my 2 favorite are definitely: Berl’s Brooklyn Poetry Shop & Unnameable Books. I’m not religious per se, but those two bookstores are as close as I come to church.

Q Train. I fucking CRUSH books on that bumpy, squealing bastard! And I write notes for poems/plays on my phone like an asshole.

Besides every bar—especially Tip Top Bar & Grill, that place reminds me of juke-joints I grew up with in NC—mostly of all of my friend’s apartments. As much as I love bars, public spaces, what-have-you, the best things always happen in the people you love’s kitchens!

I celebrate blank,
And what I blank you should blank,
For every blank me as good blank you.

About time, she sort of has me, ya know. 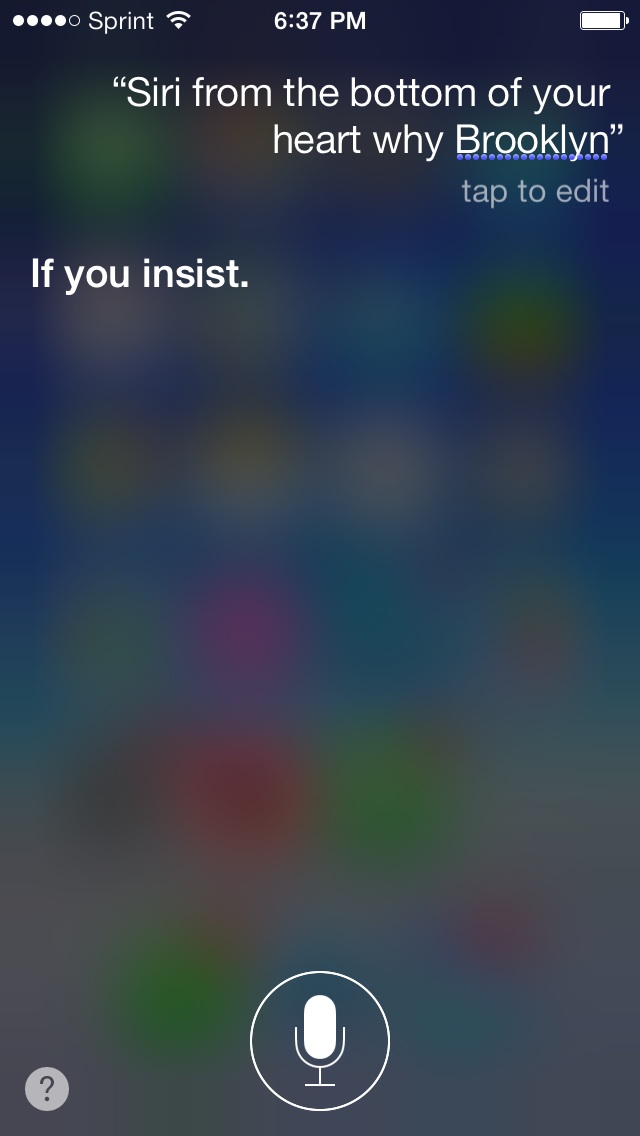