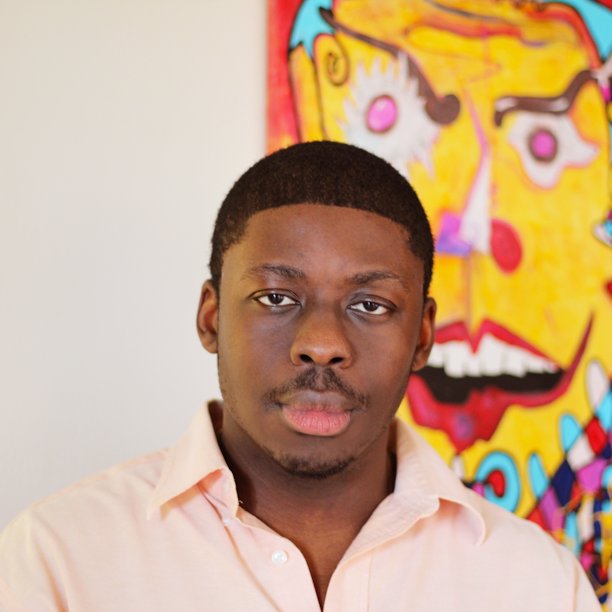 SK Rancy is a writer born to Haitian immigrants in South Florida and currently based in New York. He earned a dual BA in English / comparative literature and biology at Columbia University. He has been longlisted for the Button Poetry Chapbook Contest and named a finalist for Tupelo Quarterly’s TQ24 Open Poetry Prize, and his work is published or forthcoming in Columbia New Poetry, Intima: A Journal of Narrative Medicine, Ars Medica, Apogee, the Seventh Wave, Moko, the Adirondack Review, Porridge and Sargasso: A Journal of Caribbean Literature, Language and Culture. His novel-in-progress Beyond the Baths of Stars was a semi-finalist for the Big Moose Prize from Black Lawrence Press and a two-time finalist in the Publishing Laboratory Contest at the University of New Orleans. His debut full-length poetry collection Dreams of Diaspora and his poetry chapbook Self-Portrait in Hospital as Camus are both forthcoming in March 2023. In his spare time, he is a surgical resident.

Far from fading away, it appears that prisons are here to stay.

my cousins and me

tight, the way children should be held

in K-Swiss sneakers and baggy 2004 t-shirts

our voices were loud, and first-generation

& we chased each other

from street to street

roamed through fields of grass

of losing ourselves, only each other

in the back of somebody’s momma’s borrowed van

the roofs of our mouths swelling

I couldn’t quite figure out

why the park basketball hoops

were one day conspicuously gone

what it meant to be

what we must have been

we were wide-eyed & wondrous

at the white cop who leapt from his car

hand on his gun

on the concrete seeing him

& then all those black boys

I wrote this poem while reflecting on a true experience I had growing up in South Florida as a first-generation Black immigrant kid in a mixed-race, working- and middle-class neighborhood. In my community, there was a local park, where all the neighborhood kids played baseball, soccer, football and—most pertinently to the poem—basketball. It was a strange community in that only one street over it was largely Black, immigrant, and poor, while on the opposite side, on which I lived (ironically), the community was more middle-class and White. Kids from both sides of the street played there. And on one summer afternoon, this really happened: a bunch of Black kids, mostly boys, crowded the park playing basketball, and then apropos of nothing a White policeman pulled up to the curb and jumped out of his car, furious, shouting at us to leave, with his hand on his gun, still holstered at his hip. We were children and confused but understood the sentiment well enough. We left under duress. For years afterward I walked by that park, and for years afterward those basketball hoops remained absent, almost as if to say to us: If this is what draws you here, we’ll make it go away so you go away. Don’t come back. I never forgot that. It’s a distinct juncture in my mind between my puerile adolescence and this first recollection of frank racism that shattered that innocence.

So many things! Right now, I’ve just finished edits on Dreams of Diaspora, my debut full-length collection from which this poem comes, which will be published with Finishing Line Press on March 17, 2023, and a chapbook, Self-Portrait in Hospital as Camus, forthcoming from Diode Editions in the spring.

I’ve also been working on a novel since graduating college, about a mixed-race group of working-class, mostly immigrant kids from South Florida fighting to get out from their ’hood. It’s a reworking of the Odyssey and has been an obsession of mine for over ten years now. I keep editing it and can’t put it away. But I’ve also started a second novel that’s a rewriting of the Aeneid and will (hopefully) reflect the fragmented nature of the Haitian diaspora. I’m not quite sure where I’m going with it yet. We’ll see, I guess.

I’m a surgery resident, so I often work quite late into the night operating. A good day would be finishing work by 8 PM so I can go home and get enough sleep. That rarely happens. An even better day would be going to the theater or art galleries in NYC on a day off. The very best kind of day would be sitting on a beach somewhere in the Caribbean reading some Derek Walcott or Roberto Bolaño with my wife, the phenomenal theater-maker and actress Camila Pérez Santiago.

I moved out to Sunset Park after college because I had spent four years in Manhattan and missed immigrant communities that made me feel like I belonged.

I live in Manhattan now for work, but every day look forward to when I’m done with my surgical training and can move back to BK. I lived in Sunset Park for three years and Flatbush for four. They were both special for different reasons. Sunset Park was such a quiet, largely Latine and East Asian family community, and from the hilltop in the aptly named Sunset Park you could see the most furious sunsets. I spent many evenings there, letting the wind blow through me like a sieve or some hollow wind instrument. Flatbush was more AfroCaribbean-heavy and I really enjoyed the food and community that felt like home and the friends I made there. I can’t wait to go back.

Every march I’ve ever undertaken: for Black rights, for trans rights, for women’s rights—Brooklyn shows up, every single time. That’s community.

Poetry community is a constant family. It’s holding space with people who care about and see poetry as an essential element of life the way you do, who love writers and texts the way you do. Regrettably, I haven’t found that physical community for some time, I think because medical / surgical training is so time-consuming that it leaves you precious little time for anything else. There are so many opportunities in the city, though, and I hope to explore them soon. I’m still looking.

As an undergrad at Columbia, I took a poetry workshop with Natalie Eilbert. We got coffee and baklava at the Hungarian Pastry Shop and she critiqued some of my work. I remember her asking me, Why break the line there? and What about all this space? That blew my mind open. I think about that every time I write, how to break lines to make power, how to take up space and how to use negative space like visual art. My other mentors are from the page, like E.E. Cummings, H.D., Audre Lorde, Ezra Pound, Derek Walcott, Katherine Larson, etc., who each taught me how to use voice and structure to say different things.

Safiya Sinclair’s Cannibal. That book is stunning, man, I mean really amazing. There’s an important phrase by Audre Lorde that forms the backbone of much of Black liberation, Black feminism and postcolonial / decolonial pedagogy: “The master’s tools will never dismantle the master’s house.” Of course, this can be tough for peoples who were enslaved and forced to learn and think in a language that comes from European societies. This concept haunts Derek Walcott’s classics-influenced work, but Safiya Sinclair turns it on its head and makes it new, using the character of Caliban in Shakespeare’s The Tempest as an extended metaphor for the Caribbean’s colonized. At some points, she uses uncommon structure and diction to take apart the English language itself and make it a new thing, the way descendants of enslaved Africans have for centuries. She’s so good, man!

Definitely physical books, and definitely one at a time. Cover to cover. I like to be engrossed in the writer’s words and thought, to see the world entirely through their eyes and their eyes only as I live the book with them. I try to plan what to read next, but mostly it’s a combination of what calls to me at random and what I have time for. In surgery training, for example, I find I’ve been reading novels less but reading an abundant amount of contemporary poetry. And I’m a notorious note-taker. I love coming back to those pages and seeing what left an impression on me and why at that time in my life.

I mostly read at home but love a good subway-ride read. Honestly can’t be beat.

Bembe, Baby’s All Right, Lot45, Franklin Park—these are some of my favorite places to throw down to good music and let loose, mostly because there’s good ’90s R&B and hip-hop or dancehall and Afrobeats. But more than that, I have such love in my heart for Prospect Park. Hitting up the yearly BRIC festival of concerts in the park and then having a good drink locally at Barbès is my favorite summertime vibe.

I celebrate the body,

And what I give you will give,

For every piece of flesh that is me as good as made and is made by you.

Brooklyn is home—the home I made and where I became.