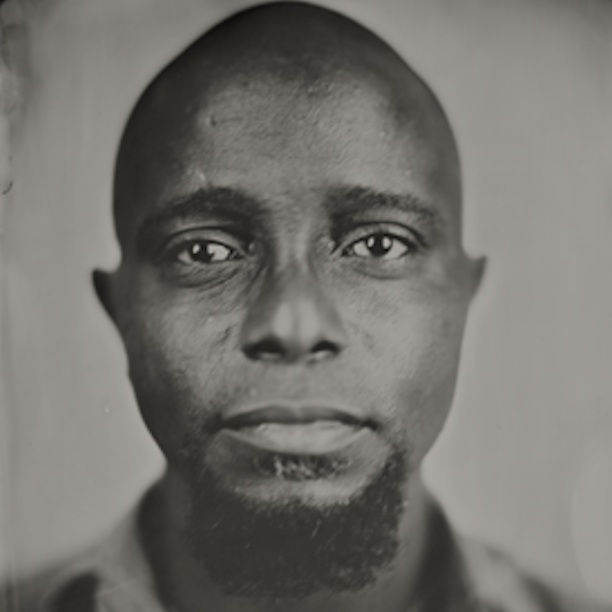 Tyehimba Jess’s first book of poetry, leadbelly, was a winner of the 2004 National Poetry Series. A Cave Canem alumnus, he received a 2004 Literature Fellowship from the National Endowment for the Arts, was a 2004-2005 Winter Fellow at the Provincetown Fine Arts Work Center and won a 2006 Whiting Award. He exhibited his poetry at the 2011 TedX Nashville Conference. Wave Books will publish his next book, Olio, in 2016. He is an Associate Professor of English at the College of Staten Island.

My name is Tyehimba Jess. I am a black poet. I have a silence to be rightened. I have a silence after each shooting. I remain a nation unsilenced. I am a poet murdering silence. My name is Eric. My name is Bell. My name is Eleanor. My name is nation. My rights fit any murder description. My remains remained on the asphalt for four hours while the crowd screamed about my rights. Then, the silence as I was shoved into an SUV and carted to the morgue. My name is poetic: Trayvon, Diallo, Ousmane, sing my blackness in the headlines. My name once held all possibilities, but now flies out from the mouth hauling anger and sorrow. I have a right to be angry. I have a morgue inside my silence. I have an arm against my throat and a bullet in my head. I have a wedding to go to, a graduation to walk, a little brother to chill with, and now I’m a face on a placard in a sea of anger, a newspaper article, I’m a question passed from one generation to the next, a lesson in fear, and all I really want is to go home. My name is murdered. My name is a silent snapshot on the funeral program. The officer remained silent. He was programmed by a nation’s anger, a moaning silence born in the chokehold of a slaveship. Ask if he is a drone cruising the streets of the nation, programmed to murder black. Ask a drone for the poetry of the names of the rightless it has murdered. Ask the silence about your rights. My name is Pearly Golden. My name is Tariq Aziz. My name is Kayla Moore. My name is Aiyanna Stanley Jones. My name is Fazal Wahad. My name is a nation of funerals. The silence after my name is murdered by the sound of the next. My name is Michael Brown. My name is Kimani Gray. Kendric McDade. Mashooq Jan. Mohammad Yaas Khann. The angry drone spotted me while I was coming home from the store, on the way to work, on the way to a wedding, walking down the street. The drone looked down at me from its great height and power and the sky was full of its murder. My murder is a right this nation angers for. My name is a poem. My name is not silence. I am a black poem written into the silence left behind.

This poem is written in response to #blackpoetsspeakout, the tremendous effort being put forth by Black poets across the planet who are joining their voices against police brutality. It is also an attempt to examine the ways that America’s “policing” of areas far beyond our national borders is also murdering innocents abroad. The names in the poem come from those killed here in the USA and children killed by drone strikes in Pakistan. I find it tragic that over here, Black folks have developed a fear of the blue uniform of police officers, while in other parts of the world, children have become afraid of the sky when it is blue because that is when the drones are more likely to have a clear shot at their communities. (It always comes back to the Blues, don’t it?)

The poem assumes the ‘form’ of #blackpoetsspeakout by remixing and revising the statement given by the poets before they record their poem: “My name is _____. I am a Black poet, and I will not remain silent while this nation murders Black people. I have a right to be angry.”

I just finished a manuscript, Olio, which will be published in 2016 by Wave Books. It’s a book of poems and short stories that examine the lives of Black artists who mostly lived between the end of the Civil War and the end of WWI.

A good day is any day I write. I try to do that every day.

I lived in Fort Greene from 2002-4. When I moved back to Brooklyn in 2009, I lived near Caton and Flatbush for four years. Now I live in Flatlands, near Flatbush and Ave. J.

I really dug living near Prospect Park. The green was something to behold …

Riding on my motorcycle on 278 beneath the overpass to go over the Brooklyn Bridge, feeling scared as hell because of the traffic and small as an ant on an oak tree, and realizing that I live in this vast, amazing hive of a city.

Best ambience—Unnameable Books is small, crammed with new and used books, and has a garden out back. It reminds me of the old-school used bookstores that I perused in Chicago.

Greenlight Bookstore has a great staff and lots of events.

BAM always has something wild going on. Great place. Also, the Main Brooklyn Library or the Brooklyn Musuem.

I’d have to say that Saeed Jones really put his foot into Prelude to Bruise. Also, Willie Perdomo’s The Essential Hits of Shorty Bon Bon deserves far more attention than it’s getting.

I celebrate the blessings of the blues,
And what I wail into stratosphere you shall burrow
beneath your nails,
For every 12 bars of rhythm lifts me as good as it
buries what might drown you.

From the D to the B (with slight apologies)

It seems like a sin
to shove my 85 y.o. father
into the crowded pen
of a poem with Biggie—
Like I’m trying to rob
him of his Florsheims, jack
his Detroit pride for Brooklyn
Nets jerseys and tilted Dodger
caps. That, I can’t do. That, I call love.

I ask myself that a lot. Then I wander down Flatbush and the answer nearly runs me over.