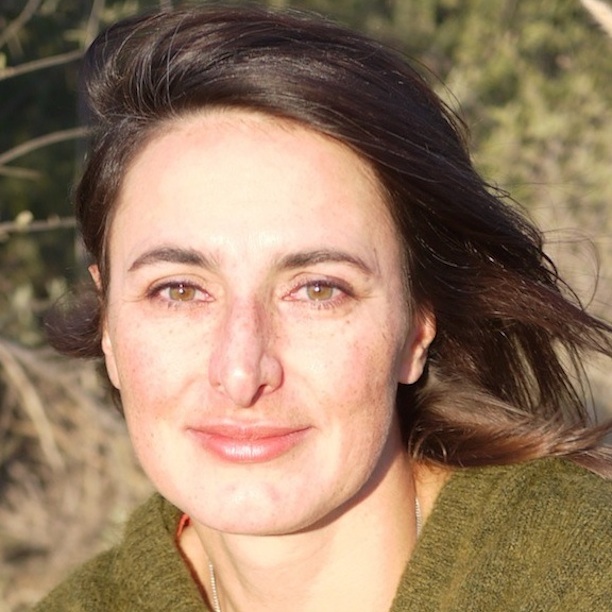 V. Penelope Pelizzon is the author of two books of poetry: Whose Flesh Is Flame, Whose Bone Is Time (Waywiser, 2014) and Nostos (Ohio University Press, 2000), winner of the Hollis Summers Prize and the Poetry Society of America’s Norma Farber First Book Award. She is also the author of Human Field, winner of the Center for Book Arts 2012 poetry chapbook award, and co-author of Tabloid, Inc.: Crimes, Newspapers, Narratives (Ohio State University Press, 2010), a study of the relationship among photography, film and sensation journalism in the early twentieth century. Her awards include an Amy Lowell Poetry Traveling Scholarship, a Lannan Foundation Writing Residency Fellowship and a “Discovery”/The Nation Award. She is an Associate Professor of English at the University of Connecticut and currently splits her time between Connecticut and Brooklyn.

Counted on a String of Beads

Owl-spectacled falafel vendor near the Mosque of Sinan Pasha who layered mint leaves densely as pages in my sandwich, Allah yehmeek.

Pimply boy hawking mulberry juice under the overpass on the highway to Jordan, Allah yehmeek.

G., certainly queer, for unraveling a souk’s-worth of scarves and modeling them for me, Allah yehmeek to you and all your secrets.

And Allah yehmeek to you, Bassam, weaving Damask silk at Madrasa Selimiye, who showed me how antique cards brailled with holes, like those I used to “sew” with a shoelace when I was little, control the loom’s pattern of threads.

Shy clerk who helped me weasel my head into a hijab, Allah yehmeek. You apologized so abjectly for touching my hair.

White kittens I fed but never brought home from the park in Kafarsouseh, Allah yehmeekoum.

Ameed, Allah yehmeek. I’m sitting next to the trunk you carved, cypress wood inlaid with a mother-of-pearl tree-of-life.

Iraqi Anna who would walk to our apartment for a glass of water, Allah yehmeeki. Allah yehmeekoum, too, to your deported sons.

Allah yehmeekoum and Yevarechecha Hashem Veyishmerecha to the last rabbi and his sister, not afraid to show us the locked temple and score of Torahs the departing Jews were forced to leave behind.

Allah yehmeek, Joe Sarki, thank you for making my wedding ring. It helps me pass as a respectable woman. We hear you made it safely to Beirut.

Allah yehmeek, Mazen, arrested February 16 at the newspaper office and not seen since. Reporters Without Borders says you’ve been tortured and may be sentenced to death. I read this online and had no idea what to do except walk into the garden and pick clean lavender sprigs to put in the copper bowl you gave us at W.’s party.

Ancient ageless Fatti, Allah yehmeeki. Have you been able to recite “No Coward Soul Is Mine” with your vowels oval as wren’s eggs at Jane Digby’s grave this year?

Skinny Palestinian kid always riding your too-big-bicycle and racking yourself in the parking lot near the convenience store, Allah yehmeekoum to you and your family.

Ladies crown-to-ankle veiled with full niqab but wearing sneakers, who powerwalked around the block each morning, Allah yehmeekoum.

Allah yehmeek, Abd. When you wrote last month that you were in danger and asked if I could get you a visa, I’m so very very sorry I was so molar-grindingly helpless.

To all the devout who refused to shake my hand but bowed heads and tapped right hands to hearts, Allah yehmeekoum.

Allah yehmeekoum, waterwheels of Hama and stuffed carrots of Homs.

Allah yehmeekoum, five generations of Armenian goldsmiths in Aleppo. I visit the burned souk in my dreams.

Allah yehmeek, Mustapha. I will never forget the chicken with garlic your friend grilled for us behind the crusader castle. What wind on the ramparts! Remember how hot it was that day in Tartous?

May I be excused now for craving a drink and asking Allah to watch over awful Barada beer?

And its stinking namesake river?

And the Phoenician ghosts of Amrit and Ugarit, where our feet crunched Bronze-age potsherds lying among the stones?

Allah yehmeekoum, pinched old men who didn’t like women smoking hookah at Nowfara Coffee Shop. I was so happy adding my blue apple exhalations to your cloud.

Ammar, Allah yehmeek, yehmeek. I’m waiting to finish our argument. I still have your book.

This prose poem—really just a wrenched list—is an appreciation of one of the world’s great urban spaces, Damascus, where I lived in 2009-10. It was written in 2012, at a point where I had physically moved to Namibia but because of the civil war found my attention preoccupied with Syria. Much of my experience of Damascus, as in any urban space, was dependent on the people I “knew” casually or even just by sight, who constituted the daily streetscape. During the hardest media coverage in 2012, it felt necessary to “count” memories of small quotidian normalcy. That normalcy included oppression for a lot of Syrians—secret police everywhere, arrests, disappearances. But of course a war makes the pre-war hardship look easier.

New poems and a couple of essays.

Any day that I don’t kill someone while driving in and around the BQE. A day that I write something that does not later seem stiff, trendy, banal or all surface. A day that includes dinner with my husband and also a few hours alone.

I’ve been a part-time resident of Carroll Gardens since October 2013, and am now living here full time for the summer. Because I moved here with a dog, I’m getting to see a lot of this neighborhood, plus Cobble Hill, Brooklyn Heights, Gowanus and Red Hook daily on foot. Being here in this way combines the escapism of the tourist (everything is exotic and new) with the small bits of local knowledge (where to buy kibble, how to joke with the landlord, what’s causing the strange smells in the alley) that ground me and make me feel connected to a place.

There’s a gratifying historical angle as well. My mother-in-law’s family are Brooklyn Italians, and I adored my grandmother-in-law, who raised four of her five kids on Adelphi Street. I’ve seen my mother-in-law weep on a visit back to the apartment where she grew up playing on the stoop. And my own grandfather, born to newly-arrived Irish, became a captain in the Merchant Marines and was based in Brooklyn. I never knew him, but there were stories about him. So, although I’m a total arriviste in the Brooklyn of 2014, an earlier Brooklyn looms large in various strands of my immigrant family mythos. Brooklyn is like a shared gene in so many Americans’ DNA, of course.

Scene: a Brooklyn coffee shop at 4 pm last Thursday. Speakers: two old Italian-American guys, WWII era, both probably pushing 90, yet dapper and voluble. One guy has that slightly wall-eyed look that might mean he has a glass eye (?). The other has much beautiful white hair.

Glass eye: “A lotta Russian ladies I know like to swim. Manhattan Beach. They have a nice boardwalk. That’s where I met the Russian girl. She says she’s married, but she says ‘He goes his way; I go mine.’”
Hair: “Oh, I had a case like that … she lives with a man. They had a child, but they weren’t married. Still, we never did it.”
Eye: “It’s hard to know the right way to meet them.”
Hair: “I known one girl seven years. Some days she brings me food.”

They go on to talk about the church (“In my father’s house, he says, they got many mansions”); Coney Island (“They still have that ride, the Haunted House? You go in there once, you don’t need to go again”); franks and beans (“Listen, I buy a pack of franks for a dollar, off-brand”); the bombing of Pearl Harbor; Hitler’s fondness for women and dogs, then his suicide (“Cyanide, they say.” “You live by the sword, you die by the sword”); how when the Russians caught a female German collaborator, they would shave her head “because the hair is very important to women”; current geopolitics (“Far as I know, we don’t got any enemies today, ’cept maybe Iran.” “Obama don’t wanna do anything rash”); to historical shifts in currency from the gold standard (“Used to be all gold bars, they call em ‘gold bunions’”).

BookCourt is our local and though their poetry section is scant, they are quick about ordering things for you. They also have a good selection of those NYRB reissues of classics, to which I’ve gotten kind of addicted.

For outdoor reading, I like sitting with my book in Cobble Hill Park, and then I sometimes gravitate to that funny sad scrappy little triangular dog park on State Street right under the BQE. My writing is a pretty solitary process and mostly happens with my laptop and notebook rotating between the dining room table, a favorite chair, and my desk.

So far, Mazzola Bakery for chocolate croissants or lard bread, and Prospect Park before 9 am for the off-leash dog hours.

In prose, speaking of the NYRB reissues bought at Court Street, Curzio Malaparte’s The Skin is astonishing and devastating. Set in Naples during 1944-45, it illuminates the ground of all sorts of political/social tensions between Neapolitans and Americans—tensions that feel very palpable even today. I’m teaching a class on “The Poetics of Space” in the fall, so am now reading some things in this direction and, for example, Robert Harbison’s Eccentric Spaces is filled with nice little gems. Jane Jacobs’s The Death and Life of Great American Cities, which I’m just discovering, is also a treat. I’m also revisiting Frank Bidart’s In the Western Night this week as prelude to his newest book. He’s so good and sounds like no one else.

I celebrate the longest day of the year in the Northern
Hemisphere,
And what I feel when I cool the poison ivy oozing
between my toes with a cotton swab dipped in
calamine you should feel as the ice cream sugars
your tongue,
For every bead of sweat licking the back of the neck for
me feels as good as the seagulls’ sunset heckling over
the Red Hook piers waking your eardrum for you.

Here I must quote Moore again, from “The Steeple-Jack,” which she wrote after moving to 260 Cumberland Street in Brooklyn in 1929: Because “it is a privilege to see so / much confusion.”