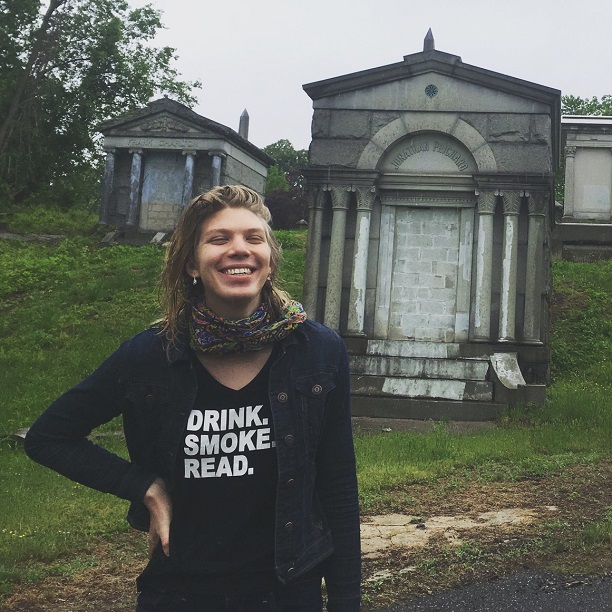 Zef Lisowski is a trans femme writer and artist currently earning an MFA in poetry at Hunter College and serving as a poetry reader for Apogee. Her work has appeared recently or is forthcoming online at the Wanderer, Vetch, Hobart and the VIDA Review, in print in the collaborative zine sundress comma fangs, and on stage at New York’s 2017 Live Ideas Festival and elsewhere. She’s always working. She’s an irredeemable Pisces.

Subject line quote news about your sister end quote. When
my father said, After Chrissy died, your mother was bat shit
the first time, it was a surprise. After that, worms.

Theories of the phallus say it’s that which is
not me, who is, of course, an increasingly
widening hole—

I’m being flip but really I’m saying,
“fill me.” Massage tits beneath

shirt, sick spit, encompass:
complete the sentence. When my father

for faggotude, it’s just as edge, candle. ____.
Something to brace the wind outside the home, and in.

When My Father Apologizes

I like the way I look in a mirror: hands
hidden in gloves, face hidden

behind hair. I’m looking for
a way to look like I’m slowing down.

When my father apologizes—
first weeks later, then months—
I feel a pulse run through me. My family

is filled with signs of excess:
heart attacks and untidy wildness. He says,
I deeply regret the pain I’ve caused you.

It takes me hours to leave the house
each morning. I’m thinking about the email until
it’s in my eyelids. I redraw my eyebrows
til the pen is nubby. I’m so sorry, he says.

I’m making a slip to wear, father from
sticks and straw to talk to, and lover, with
a clean coat, to beat me into pieces.

To say, standing over me: “dumb slut.” To say nothing else.

The email sits in the inbox like a stone.

Tell us about the making of these poems.

I started writing these poems in response to a series of emails from my father that surprised me in their anger and aggression—at me, at my trans-ness/transition, at my mother and her relationship with my sister (who died before I was born). As I finished revising them, my dad entered the ICU, and the poems took on another meaning as well—a remembrance, trying to come to reconciliation with myself and him despite everything that happened. He’s complicated and we have a fraught relationship, but I still have so much love for him. I hope that shows, too, under the language.

I’m currently deep in work on a collection about Lizzie Borden, the rich spinster femme who was accused of murdering (and probably did murder) her stepmother and father with an axe in Fall River, MA, at the turn of the twentieth century. I’m especially interested in the ways that violences of wealth and whiteness coalesce in her story, alongside her (equally alleged) queerness—what are the boxes that we operate in? What do we owe the dead? Their house was literally shaped like a coffin.

I grew up mainly in North Carolina, and was thirsting to get out. Having friends and family here already, the museums and bookstores and parks: that’s why I came here. The environment of constant self-interrogation and growth I found, the incredible artists, and my chosen support network: that’s why I stayed. I’ve grown so much.

I moved to Clinton Hill about eight months ago, after a housing crisis in my previous neighborhood of Sunset Park. I miss a lot of things about South Brooklyn—especially the expansive Green-Wood Cemetery, the food trucks, the 24-hour diners—but love my new home, a queer co-op in this old mansion tucked away behind Atlantic Ave. While Clinton Hill is a poster child for post-gentrified landscapes, its proximity to Prospect Park, my roommates, and the wild ivy that seems to be growing on every other street make Brooklyn a little less lonesome for me.

I spent some time working at a toxically gentrifying bagel/coffee shop—we sold absurdly overpriced sandwiches, and so many of the customers were unbearable. I realized recently that one of the few regulars whom I liked was the Hugo-winning fantasy author N.K. Jemisin. She’d come in several times a week, would always tip well, would talk about her day, and we’d chat, briefly, about books we were reading.

I feel conflicted about “community” specifically—I have people here who are friends, people whose work I look up to, people who call me on my shit, in ways that I haven’t had in other places I’ve lived. That’s really what I’m looking for. I definitely found it here.

So so many! My friend Rami Karim makes these really exciting, unexpected poems, as does my collaborator and accomplice Jesse Rice-Evans. Jayson P. Smith’s work—both as a curator and a poet—is consistently, shatteringly excellent. Grey Vild, too!

My undergraduate poetry instructor, Holly Iglesias, taught me so much about prose poems, making form itself feminist and queer, and the ways a poem can be political without explicitly talking politics; every time I give a reading, I think of her presence.

More recently, I’ve become a poetry reader at Apogee, and have learned so much about form and editing from the incredible, vibrant coeditors and poets there, Joey De Jesus and Muriel Leung.

I return to Dawn Lundy Martin’s incredible Life in a Box is a Pretty Life every several months; although I’ve been reading it since 2015, I’m continually rediscovering it. And I just started on her new book, Good Stock Strange Blood, which, likewise, is fucking me up. (Dawn, call me!)

Not poetry, but Avery Gordon’s Ghostly Matters has been at the top of the list for some time—I’ve heard nothing but incredible things about it and her work in general. I’ve only read some of Prairie M. Faul’s poems online, but love them and really want to read a longer collection of hers, as well.

Kate Zambreno talks about the importance of “promiscuous” reading in interviews and her essay-book Heroines. I’m always reading at least several books at a time—poetry, theory, fiction and comics—and write in as many as I can. Although I love a well-designed digital text, for note-taking it’s physical all the way.

I’m interested in a lot of things—writing toward the surreal, list poems, longer sequences of work—but mainly I want to try to feel like something’s actually done.

The park; the subway; the central library by Grand Army Plaza; all the usual suspects. I’ve written some stuff I’m really proud of during slow moments/breaks at work. Above all, while hanging out with a qt.

I could sit by the East River all day. Prospect Park. Clementine Bakery, or Toad Style in Bed-Stuy, or Happyfun Hideaway in Bushwick. My home. Brooklyn Museum. Anything within biking distance.

I celebrate the husks,
and what I touch you also touch,
for every shell that holds our bodies.
What we call the me as good, as hallow, as what we call the you.

I mean, trans people are still (ostensibly) legally protected here, and gentrification hasn’t swallowed everything yet. But really? Less mosquitoes.