Collaborating with the Room

In this workshop we’ll begin by considering the 16th-century Italian etymology of the word stanza, which defined the word historically as “room.” With a focus on collaboration, we’ll set out to create works in which we collaborate with abstract and inanimate objects such as loss, bad weather, walls of noise and undefined spaces. We’ll read and discuss works by Renee Gladman, Graham Foust, Sophie Calle, Lynn Xu, Douglas Kearney and many others, and write poems in which we discuss how lines, stanzas and negative space work together to create emotional timbre in our works. Finally, riffing on Heraclitus’s famous doctrine that you cannot step twice into the same river, we’ll read, discuss and write works in which we collaborate with repetition and contemplate how the poem, and the many rooms that compose the poem, change as we step into them twice, a third time, again and again. 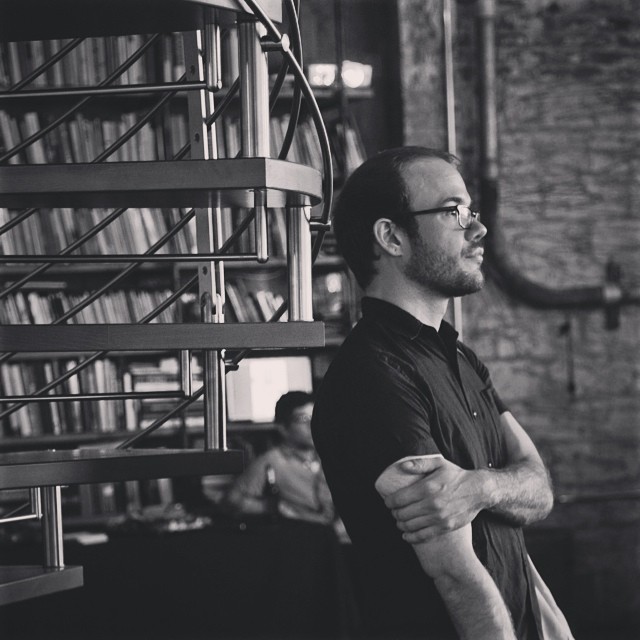 Danniel Schoonebeek is the author of American Barricade (Yes Yes Books, 2014) and Family Album (Poor Claudia, 2014), as well as an EP of recorded poems, Trench Mouth, (Black Cake Records, 2014). His forthcoming collection of poems, Trébuchet, was a 2015 National Poetry Series selection and will be published by University of Georgia Press in 2016. The recipient of a 2015 Ruth Lilly and Dorothy Sargent Rosenberg Poetry Fellowship from the Poetry Foundation, his recent work has appeared in Poetry, Tin House, Boston Review, the New Yorker and elsewhere. He hosts the Hatchet Job reading series in Brooklyn and edits the PEN Poetry Series.

Collaborating with the Room is no longer available.