M. NourbeSe Philip writes, “The word ‘image’ is used to convey what can only be described as the irreducible essence—the i-mage—of creative writing; it can be likened to the DNA molecules at the heart of all life….In [the] attempt to translate the i-mage into meaning and non-meaning, the writer has access to a variety of verbal techniques and methods—comparison, simile, metaphor, metonymy, symbol, rhyme, allegory, fable, myth—all of which aid her in this process. Whatever the technique or form, the function remains the same—that of enabling the artist to translate the i-mage into meaningful language for her audience.” This workshop will explore each of the methods and techniques Philip cites as students create original work focusing on the i-image. We will experiment with erasures, blackout poems, typography, design, palimpsests, absence, and concrete poems, and work with art work, artifacts and translations as source texts. Readings will include poems by Douglas Kearney, Jonah Mixon-Webster, Diana Khoi Nguyen, Rickey Laurentiis, Philip Metres, Justin Phillip Reed, Philip B. Williams, Harryette Mullen, Solmaz Sharif and more. 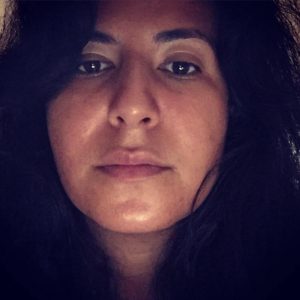 Marwa Helal is a poet and journalist. She is the author of Invasive species (Nightboat Books, 2019) and I Am Made to Leave I Am Made to Return (No, Dear/Small Anchor Press, 2017). Her work has appeared in Apogee, Hyperallergic and Poets & Writers, among other journals, and in the anthologies Bettering American Poetry 2016 and Best American Experimental Writing 2018. She is the winner of BOMB Magazine’s Biennial 2016 Poetry Contest and has been awarded fellowships from Poets House, Brooklyn Poets and Cave Canem. Helal received her MFA in creative nonfiction from the New School and her BA in journalism and international studies from Ohio Wesleyan University. Born in Al Mansurah, Egypt, she currently lives and teaches in Brooklyn.

Poetics of I-mage is no longer available.